A Dance Floor of Our Own 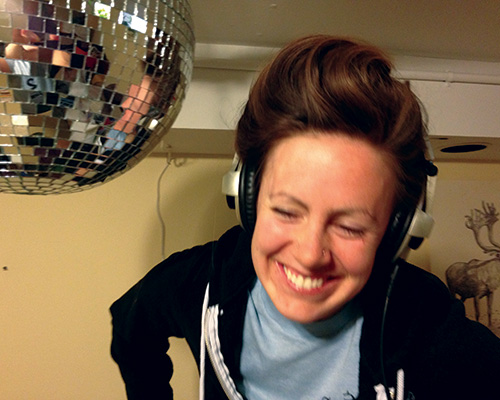 Who are you and what do you do?

I am DJ Boyfrrriend, and each month I host and DJ the fantastic dance party called Loose Cannon. Loose Cannon is an intentional safe(r) and separate space dance party for queers and members of the LGBTQIA+ community. We have held it at a couple of locations but most often at the Dragonfly Lounge (under Bellini Italian Restaurant).

I enjoy DJing events throughout the Midwest, especially fundraisers for radical grassroots organizations committed to social change. But Loose Cannon has a special place in my heart as it really embodies something I had wanted to create for a long time. It also gives me a chance to mix and scratch with music I feel really passionately about.

I taught myself some DJing basics with lots of help and encouragement from DJ Saeng, Amy Barber, and the staff at MC Audio.

How long has Loose Cannon been running? What prompted you to start it?

Two years ago, I started looking into venues for a regular queer dance party that specifically highlighted queer, female, and local artists in Hip Hop, R&B, Pop, Riot Grrrl, Punk, and Electronic music. A club manager told me he wouldn’t allow any Hip Hop or R&B to be played because that music draws an “unsavory ghetto crowd,” and that he didn’t want “that type” of person in his club. I told him this type of policy had racist implications, contributed to a culture of discrimination, and that I wasn’t interested in working with him. He called me foolish and said he had half a mind to warn other bars about what a “loose cannon” I was.

Around this same time I was put in touch with Caro, who had similar ideas about organizing a new queer dance party in Madison. Together with other friends, we determined that in addition to conscious music choices, we wanted to make a space with full gender inclusivity and body positivity reflected in promotional materials, the handling of photo IDs, and bathroom designations. We wanted it to be affordable, wheelchair accessible, have themes that didn’t encourage cultural appropriation, and to have an explicit policy against predatory behavior. Most importantly, we wanted a dance party that truly prioritized a space for just queers and ALL members of the LGBTQIA+ community. We didn’t want a queer “friendly” space; we wanted a queer space—and one that understood “queer” could be more than a sexual identity, but also a radical political identity that encourages critical thinking and active resistance to all of society’s fucked up systems of oppression.

What kind of reactions/input have you gotten from attendees? Why is it important to have a queer-specific dance party like this in Madison?

I am constantly overwhelmed, in the best way imaginable, by the amount of positive feedback that I’ve gotten about Loose Cannon. I think people appreciate having a place to dance where their identity is more thoroughly respected and the music is different from what you might hear at an established club. Many queer people appreciate a space that is not just free of homophobic people, but also free of people who are both straight and cisgender who may come as “allies” but (whether intentionally or not) end up acting as “tourists.”

What are some of your favorite memories from the theme parties?

Lisa Frank, the Better Off Alone Valentine’s Day party, and the All Denim Everything: Chambray Soirée were all really good themes. There have been some really extravagant, bizarre, and creative costumes, drag, and dance performances that have blown me away. I once started crying during a large and unexpected “Let’s Have a Kiki” flashmob because it was so beautiful.

What are your hopes for other queer-specific nightlife events in the future?

The more the merrier. But I also hope queer people use their energy and resources to create nightlife options that challenge norms and tackle current problems in our community. Nightlife should be for all of us, not just for profit. Communities should challenge each other to resist oppression in all its forms. Smashing homophobia won’t get us anywhere if we are tolerant of transphobia, patriarchy, white supremacy, abelism, classism, a culture of violence showcased by militarism and the prison industrial complex, etc. It is possible to both love to party and to understand that we have a lot of difficult work to do.