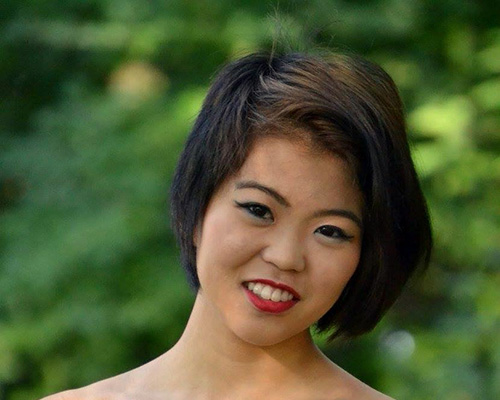 For the first 13 years of my life, these identities served as restraints holding me back from being myself. But during the past three years I have met and worked with incredible people who’ve helped me to embrace all of my queer, Japanese-American, femme, non-binary glory.

I was born and live in Fond du Lac, Wisconsin, a city with a population of less than 50,000, of which the majority are white and conservative. My brother and I were the only Asian students in our elementary school, a fact I realized only after my freshman year of high school. My childhood was happy, albeit tinged with ignorance. I remember praying for blonde hair and blue eyes every night so that I might look a little more like my classmates, and I remember seeing a disappointed reflection the next morning in the mirror. My parents would speak about being refused service at local grocery stores or being told that the “Japs should’ve all been nuked,” but I thought that these instances of discrimination were isolated, perpetrated by a few hateful people. It was impossible to comprehend that the place where I had grown up could hate me so much. But as you grow older, you gain perspective.

I started off in middle school as the cliché Overly Invested Straight Ally, writing papers about marriage equality and holding a Day of Silence as the lone participant. Whenever confronted about the fact that I seemed to care an awful lot about LGBTQ+ rights for someone who wasn’t queer, I would launch into a tirade about how straight allies were ever so important to the fight, all while proclaiming my extreme heterosexuality. I see now that my 12-year-old self knew, deep down, that I wasn’t as straight as I claimed. But I was terrified to admit to myself that possibility, because I had associated being queer with certain unhappiness. I had only ever heard about queer and trans youth from their obituaries. I knew no out LGBTQ+ adults; and I drew the conclusion that to be queer meant a life of loneliness and despair. It is no wonder that I had vehemently denied what I knew to be true.

The summer after my first year of high school I attended LTI, GSAFE’s camp for youth leaders. I hold those four days dear to my heart and firmly believe that they were instrumental in transforming my life. LTI gave me many things—the skills I needed to lead a club, facts about HIV/AIDS that I hadn’t gotten during my school sex ed classes, and incredible food cooked by everyone’s favorite chef, DJ. But the most important thing I took away from LTI was the knowledge that I was not alone. I met other queer youth from all over Wisconsin. I met another Asian queer for the first time. I left LTI feeling empowered and brave. I left LTI not only wanting to survive, but wanting to thrive.

After spending so much time working with folks from Madison, I became frustrated at the lack of resources for youth in the Fond du Lac area. By the time that I had started high school, there were no active youth LGBTQ+ organizations within the Fox Valley, which only helped to perpetuate the illusion that we were alone. By my senior year, I had had enough. Along with a group of highly motivated and inspirational youth, I started a LGBTQ+ youth group called the Fox Valley Alliance. I had learned from LTI that youth had the power to make the change we wanted to see in the world, and I used that knowledge to make life better for people like me in the Fox Valley.

While our group is relatively new, we have plans to increase our community outreach efforts through monthly meetings and other LGBTQ+ centered events. The only requirement to join this group is holding the passion to change the lives of queer/trans youth in the Fox Valley for the better, and I am grateful and proud to say that we have gathered more people than I ever thought possible.

I cannot stress the importance of community. I firmly believe that one of the worst weapons in the battle against the LGBTQ+ community is the image of isolation. It is so very important for queer and trans youth to find each other and band together, and I cannot thank organizations like GSAFE enough for making that possible. Through GSAFE, I was able to meet and work with people that shared my identities and helped me on my journey to self-love and acceptance. The community I am lucky enough to be part of has been instrumental in helping me heal from the hurt of oppression and loss, and I know that had I continued to be alone that I would never be here today.

I was lucky enough to go back to LTI two more times, once as a peer mentor and once more as a senior mentor. I discovered there that my true joy and passion lies in building community and sharing knowledge—the youth that I have met continue to amaze and inspire me, and I know that I will never forget them. My goal during college is to achieve a double major in Music Education and Social Work, with a minor in Gender and Sexuality Studies. To work with an organization like GSAFE that empowers and saves so many young queer youth is my dream—I was lucky enough to be one of those youth, and I can only hope that I will someday be able to repay the favor.

Today, I see my reflection in the mirror and I wouldn’t change a thing. I hold my queerness as a gift, a precious part of me that I wouldn’t give up for the world. The messages I have heard for my entire life about how my identities and my happiness cannot coexist have not ceased, but the call of self love and and liberation is stronger. I am proud to be part of a community that is working to change the world for the better, and I invite you to join us.