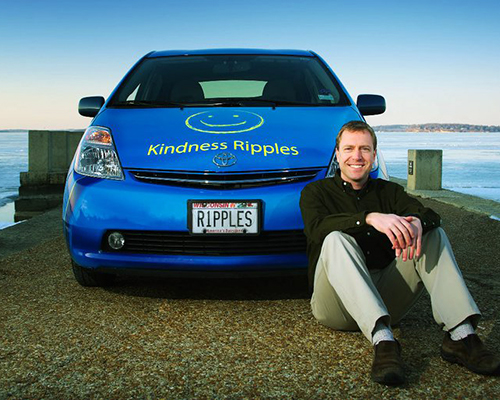 I have it on good authority that it is not polite to honk and curse at people on the road, even if they deserve it. This is especially true if you happen to drive around in a bright blue car emblazoned with yellow smiley faces.

I am proud to report that my road rage has been vastly reduced since I covered my Toyota Prius with smiling faces and the phrases, “Peace Ripples, Kindness Ripples, Happiness Ripples” a few years ago. And, I am ashamed to admit that it hasn’t completely eliminated the occasional heated reaction. (I apologize sincerely to the gal on University Avenue a few months ago. You made a mistake that most certainly did not deserve THAT reaction from me.)

My BEST self knows that everyone makes mistakes, that I want people to be respectful and forgiving of me when I make mistakes, and that many of the driving behaviors that get me riled up are not egregious enough to warrant an over-the-top reaction (read: yes, Virginia, sometimes I am a drama queen). AND: when I bring my full attention and my best self to driving, I’m fully engaged in the process, less distracted, and I am able to anticipate or quickly respond to driving hazards. The problem is that my FULL self does get angry, does have control issues, and can be righteously indignant. My FULL self sometimes makes it challenging to be my BEST self. My goal has been to find the overlap of the two: how to bring the best parts of my full self into most of my days. I work hard to channel my desire for control into managing the details of my business and instead of directing my anger and righteous indignation toward insignificant challenges, I direct that passion against egregious wrongs, i.e. racism, homophobia, human rights violations.

In my job as a leadership trainer, I challenge people to bring their best full selves wherever they go: to work, at school, in life. When we tap into all of who we are and combine them with our highest intentions, it is easier to engage people, to fiercely conquer problems, and to maintain a “big picture” perspective even when tempted to get sucked into minor dramas.

To some, bringing your best full self might sound exhausting or inefficient, and this is where I planned to make a case that it is completely worth any extra energy. But my perspective shifted when I posted a question on Facebook about whether you are more effective when you bring your best full self to your crazy life. A cool gal from Nebraska named Robin wrote, “Being your FULL SELF is your natural state. To be anything less requires energy to edit out certain parts, or to pretend to have other parts that aren’t natural for you. Any energy you use to try to be something other than your FULL SELF is energy that can’t be put into work/school/life.”

Should bringing our best full self include our gayness (or bi-ness, or trans-ness, or lesbian-ness or some other-ness)? How many times have we had the discussion about whether it is a good idea to “flaunt it,” the “it” being that part that society does not officially approve of, that others might accept but not embrace? Or perhaps we have found ourselves commenting on the choices of other people who talk about “it” more than we do: “Being gay is just one part of who I am and there is no need to discuss it at work, school, etc.”

I remember what it is like to be embarrassed by my gayness, to be ashamed that at times I sounded, acted, felt different than other guys. I remember well because it happened so many times in my childhood and sometimes even today. I am still sometimes invited to feel embarrassed or ashamed of who I am.

Last year I spoke at a high school assembly on the day before their school participated in the “National Day of Silence” which invites students and staff to remain silent during non-instructional periods to recognize that LGBT people (as well as others) are discouraged from bringing their full, best selves to school. I talked about the consequences of bullying and included my own story of being picked on in school. I stuck around to meet with some LGBT students who shared their own positive and (extremely) negative experiences in school and life. As I drove away from the school in my car-of-smiles (which I had mentioned in the speech), a car full of students heading back from their lunch break passed me and screamed, “Hey, Faggot!”

For a moment I felt an unfortunately familiar flood of fear and humiliation wash over me and I regretted having wasted my valuable time trying to reach out to high school students. Then I quickly recognized that if I did not respond, those students would be empowered to continue bullying others. I also remembered that my Prius is a fairly nimble car. I won’t tell you how fast I drove to turn around and catch up to them as they pulled into the school parking lot, and I won’t share with you all the words that came out of my mouth. I will tell you that confronting them, and then describing the incident in detail to the school administrators were among the most empowering actions I have taken in years.

The students in the car were able to hear me describe my frustration, the other students in the school (who had given me an unexpected and overwhelming standing ovation at the end of my speech) quickly learned about the story when many of them connected with me via after school, and a few days later the administrators were able to transform the awkward and unfortunate actions of a few into a graceful and productive series of homeroom discussions about the power of our words and actions.

I can be proud that I challenged those taunts that came from others even while I recognize that my own internal obstacles still exist.

This summer I attended a same-sex wedding in rural western Wisconsin with 200 mostly heterosexual guests including 15–20 children. Toward the end of the ceremony, and again at the rehearsal dinner, I found myself nervous about how the parents might react to having their kids “exposed” to a same-sex kiss. Perhaps the grooms would avoid the tradition of kissing when guests clinked their glasses? I realized that I had never once, in all the dozens of wedding I had attended in my life, ever EVER thought about whether it was “unwholesome” to “expose” children to newlyweds’ kissing. I was relieved to discover that the grooms did not share my concern. The DJ announced the couple would only kiss when someone sang a song with the word “love” in it, and the impact was incredible: several times people stood up and belted out classic “love” songs and cheered when the grooms kissed. The love that flowed from family and friends drowned out previous fears and trepidation.

In a society that doesn’t grant us full rights and opportunities as citizens—as soldiers, as parents, as human beings—we need to be brave enough to confront injustice, strong enough to support each other, and smart enough to support ourselves when necessary.

It isn’t always easy, but there are payoffs. I consider myself very fortunate to have stumbled into a career that encourages me to bring my best full self most days. In my speeches and workshops, I frequently include at least passing reference to my gayness to remind every person I encounter that their capacity to enjoy and improve the world increases when they each bring their best full self. When I bring my full self to the stage, I am more relaxed, and instead of worrying about accidentally saying the wrong thing, I can focus my attention on choosing the right anecdotes and ideas. And if a core message in most of my speeches is about being your best, full self, I can gain respect through authenticity: my words are congruent with my actions.

However, I was a bit nervous about coming out during two recent speeches. I was concerned the audience might lose respect for me and my message and instead focus/judge me solely on my gayness. Would 600 industrial factory workers run me out of their small town? Might 200 Mormon college students chase me out of their state? As it happened, my own prejudices were challenged even as I challenged theirs. On each of those two days, I was feeling particularly brave, strong, and smart, and after warming up the crowd with some funny stories and an overview of the topic, it became relevant to mention my sexual orientation.

As usual, coming out opened up possibilities. The awesome crew at a Procter & Gamble plant in rural Canada was indeed able to embrace my “flamboyant” antics and stories which helped the message stick. And it turns out that despite some differences of opinions, students at the Utah Leadership Academy could hold deep respect for a gay man who has something significant in common with them: we are sometimes judged based on one part of who we are without being given an opportunity to introduce our best full selves to others. These incredible people reminded me again that bringing my best full self invites others to do the same.

In a recent issue of “Ripples,” a brief inspirational email I send out on Monday mornings, I shared a quote written and submitted by one of our subscribers: “During the toughest of times, the best or worst can emerge from each and every one of us … which will you choose? Be a positive influence every day!” —Mike Moribundity Our road to full equality and inclusion in society includes countless potholes and detours and other obstacles, but I hope you remember that you too can enjoy and improve the world each time you are brave enough, strong enough, and smart enough to bring your full, best, gayest self to work, to school, to life—and on the road, too, even if you aren’t driving a bright blue, smile-covered car. As a boy named Christopher Robin once said to a bear named Winnie-the-Pooh: “You are braver than you believe, stronger than you seem, and smarter than you think.”