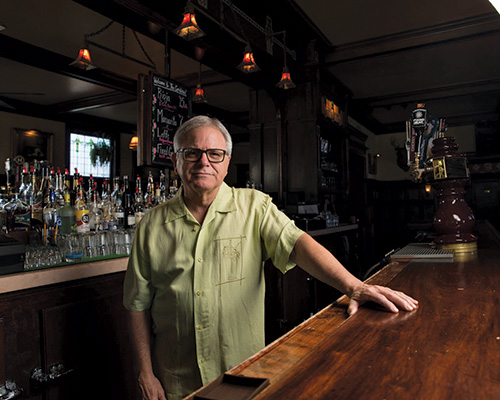 For all of you who know the Cardinal Bar you may have heard it recently celebrated its 40th anniversary. This is a milestone of epic proportions—the typical lifespan of a nightclub nowadays is 2 to 5 years. It is no secret that this is one of the most difficult businesses around, yet the Cardinal Bar has a designation very few people know about: it’s America’s longest running nightclub in history.

Credit goes to founder and owner Ricardo Gonzalez, who opened the club as a gay bar back in the winter of 1974. Since then, the club has transformed itself many times but has always been the go-to place in Madison for music and progressive politics. To know what makes this a success story is to know the story of the man who has been able to accomplish this for four decades.

Ricardo was born in Camaguey, Cuba in 1946. Political upheaval forced his family to leave Cuba for Miami in November of 1960 when he was just shy of 14 years old. At just 16, with only a winter coat donated to him by the Cuban refugee center where he lived, $20 given to him by his father, and a one way airplane ticket, Ricardo left with his older brother for Oklahoma City. After college, Ricardo took a job at Green Giant Company in Ripon, Wisconsin. Shortly thereafter, in 1972, he ran as the first Latino for State Assembly under the name “Rick Gonzalez,” fighting for farmers’ tax rights and stating that, “Today’s farmers are paying for tomorrow’s developers.”

Ricardo moved to Madison in 1973 and began working for the State as an Affirmative Action Officer. He was also a volunteer and outspoken advocate for the Madison Gay Center. During a vacation to Key West he witnessed firsthand how open and free a lifestyle the gay community led. This not only inspired him, it radicalized him to try to instill that sense of citizenry for the LGBT community in Madison. He was motivated to open a venue that combined his belief system as an openly gay man, while preserving his Latin heritage.

Serendipity intervened upon his return when seeing an ad for a lease for a tavern at 418 E. Wilson. Back then, the neighborhood had the title of “Skid Row,” and the building itself was getting long in the tooth, having been constructed in 1912. Ricardo was reluctant that the condition of the building and the location would not be the right fit for his idea. However, when he walked in he immediately noticed the pristine tilework, detailed woodwork, and the overall aura of the building—and Ricardo knew that was where it was all to begin. In December of 1974, the Cardinal Bar opened its doors as Madison’s first Latin gay bar. The rest, as the Cubans say, is historia.

The mid-to-late ‘70s brought a lot of changes to the scene, especially as the Disco Era entered its peak. Ricardo felt the need to shift the bar from a Latin gay club to what was popular to keep up with the times. However, the bar always maintained the reputation of being “the gay bar that straight people went to.” In the ‘80s the Cardinal was cutting edge, by bringing “Radical Drag” into the scene with lavish and theatrical drag shows such as “The Lavender Reviews.”

Ricardo sold the Cardinal in 2004, but after ups and downs the new owners put it back on the market. Ricardo bought it back in 2009 and re-opened and re-energized it.

Since the ‘90s, the club has been not only been an epicenter locally for the growing music scene, but has also made a name for itself internationally for being a venue that proves that politics can have a place on the dancefloor.

“The Cardinal has always been an affirmative action at work,” says Ricardo. “My formula is simple—we define diversity through music. That’s what defines a nightclub. It’s worked for me this long.”

Ricardo has experimented with renting out the small coat room area as a food space, first to restauranteur Chris Burge and then to the La Taguara folks (who still run a full-scale operation on East Washington). Plans are in motion for future uses of the space as well. In the meantime, the club’s various Latin, jazz, hardcore and house music nights continue to thrive.

Tulin Waters is a local promoter of all-female comedy and themed shows primarily focusing on feminism and ageism. She is director of Les Cougars, an age empowerment variety troupe for women over 35. When not on stage, she juggles an office job and property management, and is a single mom to a son and a rescue Chihuahua.