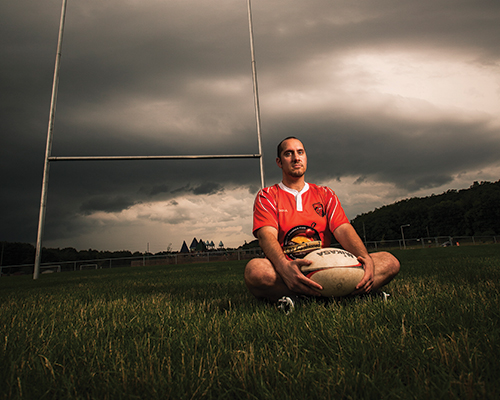 Like so many other LGBTQ people, my formative years did not conveniently and abruptly end when I turned 18. Throughout my twenties, I was actively searching for some sense of community that would specifically address my goals and wants. At the age of 27, while some of my former classmates and peers were settling down and getting married, I found myself persistently, and somewhat pleasantly, lost and drifting further afield of the institutions that raised me. I wasn’t unhappy, but I was definitely missing a sense of structure and purpose to my life.

I didn’t really know anything about rugby back then, other than that I once owned a rugby shirt I really liked and that a really good-looking guy named Ben Cohen used to play it. At the time, this was enough to get me involved with the Madison Minotaurs; the fact that a trusted friend sold it to me so convincingly certainly helped. My first experience with rugby was a bit jarring. First of all, rugby is an incredibly taxing game physically and emotionally. It’s a full-contact game of tackling, rucking, and scrumming—with very little padding—and bloody noses, bruised legs, and black eyes soon became a fact of life. Secondly, we were playing in early March, or as most Wisconsinites refer to it, “the dead of winter.” These are not the conditions in which rugby is normally played, let alone learned, but the determination and devil-may-care attitude of the guys around me was infectious. The socials we had after practice were incredibly fun and memorable, and we felt like we were all in it together. Our audacity and sense of adventure carried us through the whole process. We became a registered nonprofit, reached out to other local rugby clubs for instruction and coaching assistance, and played our first-ever scrimmage against our good friends the Minneapolis Mayhem.

Sense of Fellowship In and Among Rugby Teams

It was during these first couple of years that I began to understand that the sense of fellowship I was feeling had extended to other gay rugby teams in the area, especially the Chicago Dragons and Minneapolis Mayhem. The unique culture of rugby was allowing me to relate to people on a level that was previously foreign to me. Singing ribald rugby songs at the post-match parties, playing drinking games, providing lodging to the opposing teams’ players, and starting our own Minotaur team traditions showed that the extended community of gay rugby was bigger than I had realized. The sense of camaraderie I had once only associated with being a Minotaur was something I now felt for other people in the gay rugby community as well. This feeling of fellowship was most prevalent during the first Bingham Cup tournament I participated in. The Bingham Cup is also known as the gay rugby world cup and is hosted by IGRAB (International Gay Rugby Association and Board) every two years in places as diverse as Dublin, New York, and Manchester.

The Bingham Cup is named after Mark Bingham, a young man whose passion for rugby and his fellow man led to an incredibly heroic act. On September 11, 2001, Mark Bingham and a handful of other Americans turned the tables on the terrorists who had hijacked their commercial flight—and potentially saved hundreds of innocent lives in the process. Mark Bingham’s mother, Alice Hoagland, was present at our first Bingham Cup in 2010, which was held in nearby Minneapolis. Meeting Alice and hearing her story was a real turning point in my life. She is an inspiration to anyone who meets her, and she clearly has a real understanding of her son’s love of rugby and how it was integral to his heroic life. Everyone at the tournament called her “Mom,” and she returned the affection she received graciously.

Increased Feelings of Self-worth and Gratitude

It was at this point that I felt like I was coming out of my shell. The Madison Minotaurs went on to experience a real period of growth, recruiting a whole batch of new players and winning tournaments in Chicago and Toronto. The shared experience of competing with my Minotaur brothers filled me with confidence and a real sense of pride. By putting my faith in my teammates, I saw us compete at a whole new level. Rather than battling our own sense of self-doubt and fear, we were now going toe-to-toe with our peers. This feeling was beginning to affect my personal life as well, increasing my feelings of self-worth and assertiveness. This past June saw us compete in our second Bingham Cup in Manchester, and the experience was incredible. On that snowy day in March years ago, I never would have believed that our team would be able to send a full competitive side to the UK. Between the extended family I’ve made and the experiences I’ve had, I feel an enormous sense of gratitude to the people who have supported the Minotaurs and to the wonderful teammates who I am glad to call my family.