Congrats! We Can Marry. Now Should We? 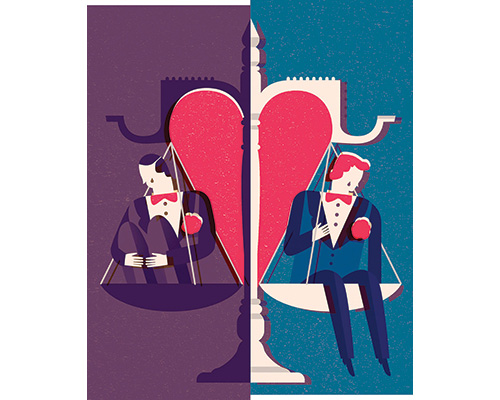 It’s understandable that gay and lesbian couples want to marry and marry now. We’ve been denied a fundamental right that is finally available to us. Yet in the jubilation of recent events, some couples may be marrying without a full appreciation of the rights and, more important, the obligations that stem from marriage. This is not unique to gay and lesbian couples. Opposite-sex couples marry every day without understanding what they are signing up for. Before you tie the knot, consider a few of the obligations that come along with being a spouse.

Wisconsin is a community property law state. Technically, we are a “marital property law” state, which is a form of community property law. What this means is that having a title in your name alone doesn’t determine ownership of property when you are married. So, even if you owned a home prior to the marriage and you alone continue to pay the mortgage throughout the marriage, your spouse still owns a presumptive one-half interest in the home. The same is true for your retirement accounts, investments, and essentially almost every asset you acquire during the marriage, other than inherited and gifted assets.

Just as your spouse gets to share in your assets, you get to share in your spouse’s debts. If two spouses have different perspectives on finances, this can be problematic. One spouse could be quite frugal, while the other may appreciate fine food, luxurious vacations, and designer clothing. It doesn’t matter whose name is on the credit card—both spouses are jointly and severally liable for the balances.

Approximately one-half of all marriages end in divorce. There is no reason to believe that we are immune from this statistic. There will be same-sex marriages that end in divorce. And with divorce, there is a potential for one spouse owing the other spouse maintenance, our state’s term for alimony.

One of the most significant factors in awarding maintenance is the length of the marriage. What we don’t know is how a court will determine the start date of a same-sex marriage. Is it October 6, 2014, when the state was required to recognize same-sex marriages? Is it the date the couple married previously in another state or country? Or is it the date the couple began to live together and would have married but for being denied the right to do so?

For example, let’s assume John and Bill lived together for 30 years when they decided to marry in 2012 in Iowa. In 2015, Bill files for divorce. When the judge needs to decide the issue of maintenance and how long the couple has been married, does she find that John and Bill have been married for only one year (i.e., 2014 to 2015, the year between Wisconsin recognizing same-sex marriage and the date of the divorce) or three years (i.e., the date of the marriage in Iowa)? Or maybe 33 years (i.e., the duration of the parties’ cohabitation)?

In addition to the potential obligation of support for your spouse, the law presumes you will share equally in all of the assets acquired during the marriage and even property brought to the marriage. If there is a great disparity in assets or debts at the time of the marriage, this may not be the arrangement both partners believe is fair.

There are tax advantages to being married, but there are also disadvantages to consider. For example, a couple in which both spouses are high-income earners may be pushed into a higher tax bracket than if they were single individual filers. This is sometimes referred to as the “marriage penalty tax.”

Same-sex couples who are approaching retirement age should consider the impact the marriage would have on both Social Security benefits and Medicaid planning. In the context of retirement benefits, if a partner was previously in a marriage with an opposite-sex spouse, he or she would be entitled to receive Social Security retirement benefits based on the former spouse’s earnings if the marriage lasted at least 10 years. If the person marries again, he or she cannot collect on a benefit based on the former spouse’s earnings.

If either spouse may need to rely on Medicaid to pay for nursing home care, there are strict income and asset limitations that must be met to qualify. A spouse’s assets may not only disqualify the other spouse from receiving nursing home benefits—the state also has the ability to levy marital assets to recoup the cost of the nursing home care.

Of course, these are all practical, tangible, and financial considerations of marriage. This ignores the real reason couples marry, which is to express and solidify their love and commitment. Still, this doesn’t mean couples should do so blindly. Sometimes the right to marry includes the choice to not marry.