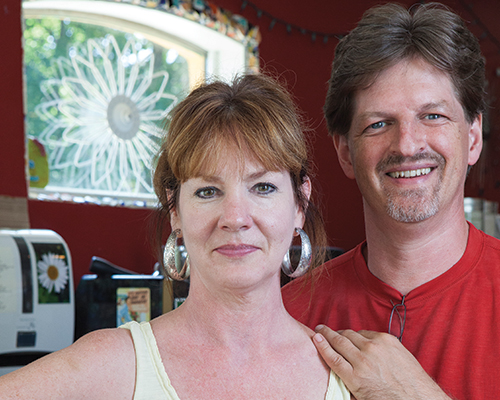 You could say that Daryl Sisson and Kathy Brooks chose the neighborhood, but the neighborhood also chose them. Daisy Café and Cupcakery celebrated its third anniversary in May, which also marked the day they sold their 250,000th cupcake. They boast Madison’s “Favorite Waitstaff” two years in a row in Isthmus’s Annual Manual, as well as a runner-up title last year for “Madison’s Favorite Sweet.”

“We had no idea it would take off like it did,” Brooks says. The cupcakery was the first of its kind in Madison, but many others soon followed. “We were the first within a very short period of time.”

The idea sprouted from Sisson’s visits to his home turf in Seattle where cupcakeries were popping up all over the place.

“We started by picking the neighborhood, and this neighborhood reflects that diversity,” Sisson says of their focus on inclusivity, which is reflected in both their staff and clientele. “We have a disproportionate number of drag queens on staff,” Brooks adds.

Brooks and Sisson met while working for Food Fight, where they coined the “GLBT” sandwich—guacamole, lettuce, bacon, and tomato. They both left Food Fight to open Daisy Café and Cupcakery, where to date they have released more than 500 flavors, ranging from Brooks’ favorite (extreme vanilla) to a rotation of seasonal creations.

“We can’t even keep track,” says Sisson, who is personally a fan of “the latest and the greatest” new flavors.

Although there’s no shame in dessert for breakfast, the café’s extensive menu provides an array of options for morning, noon, and night, including multiple variations on stratas and meatloaf. The menu also leans heavily toward vegetarian and gluten-free options.

Local art hangs on the walls, which includes both Brooks and Sisson’s own work. “Art and the restaurant are so intertwined,” Brooks says.

“The latest we hung was my own,” Sisson notes of Brooks’ influence on his newly acquired mosaicing skills.

It’s a busy life, full of long days, and sitting down as we are is a welcome but rare moment. When the going gets tough, Sisson says he just has to come back to work because clients “say such nice things.” “That’s as gratifying as it gets,” he says.

They’ve seen one of their clients celebrate her 100th birthday at the cafe, and they’ve been proud to lend a hand during union and wedding ceremonies with their cupcakes.

“I have been in this community for 25 years, so I know so many people and I’ve known them for a really long time,” Brooks says.

“We love being a part of this community,” Sisson adds.