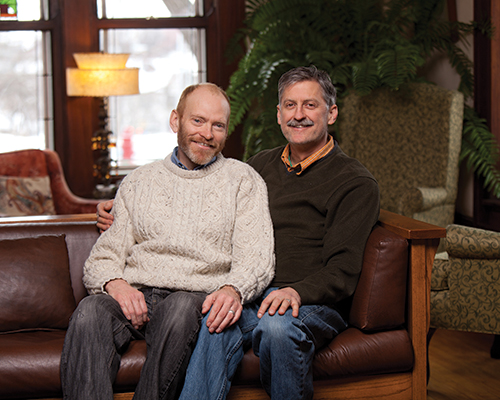 In the summer of 2011, my husband, Bob Klebba, and I took a boarder into our home. The first thing she wanted to do was read my astrological chart. I remember two things she told me—one, that big changes were coming; and two, that if I could make a career out of how I set up my home, I would be very successful. Five months later the historic Collins House went up for sale and I embarked on a mission to buy it and turn it back into a bed and breakfast.

I guess it was in the stars.

The Dream and the Reality

I work full-time at UW-Madison, and Bob runs the plant nursery we own, Morningwood Farm. The idea of running a bed and breakfast has been on my mind for many years. At one point, I even took an eight-week bed and breakfast short course. Originally, I thought I would build a country B&B at our nursery. However, with the poor economy, the plan to build kept getting pushed back.

For 20 years, Bob and I lived less than a mile from what was then called the Collins House, a historic home being operated as a bed and breakfast. I rode my bike by that house every day on my way to work. When the house later sat empty, I would sometimes park my bike in back and peer through the windows, trying to get a glimpse of the inside.

The house had been owned by the city since the 1960s. Back then, the city was buying up all the lakefront properties in the area and tearing down the homes to create what is now James Madison Park. The Collins House became the City Parks Division office. In the ’70s, the city approved landmark status for the house, because it is one of the finer examples from the Madison-based architectural firm of Claude and Starck. Ultimately, it was this landmark status that saved the house from the wrecking ball when the city later wanted it removed in order to expand the park.

In the mid ’80s, the house was leased out as a bed and breakfast. When the lease came due in 2005, the city and the owners could not come to an agreement and the house was abandoned. It remained vacant until the city finally made the decision to sell the building but retain the land.

When I first heard of the sale, I thought the price tag would be way out of my range. Going through the sale documents, I noticed the city had appraised the building, without the land, at $185,000. My heart leapt. This was doable. My dream home and my dream business were right there, and the opportunity was right in my own backyard!

In order to sell the building, the city formed a committee that consisted of neighborhood residents and three alders. We had a problem. All three alders were well known to us because they were all three big supporters of the controversial Edgewater Hotel redevelopment, which Bob and I had been very vocal opponents of. To me, it felt like the political cards were stacked against us, and I had little hope our proposal would make it.

Bob, on the other hand, got on the phone to rally the troops. At the final committee meeting where we gave our last pitch, I felt like George Bailey from the film It’s a Wonderful Life. Our friends and supporters streamed into the meeting to testify on our behalf. In the end, two of those alders opposed us, but one of them, Ald. Mark Clear, turned out to be one of our biggest supporters. His vote and the other committee members’ votes were in our favor. We had it.

But it was not over. The second-place proposal was from a wealthy woman in Washington, D.C., who wanted to buy the house for her daughter, her son-in-law, and their two young children, who were living in Madison. She had the historic restoration credentials and a strong offer. She was working through a well-known Madison attorney. When her proposal was not selected, she couldn’t let it go. Then there was our own alder, Bridget Maniaci, who decided to fight us, too. Because we had a number of other city committees that needed to weigh in, the battle had just begun. We were also up against a formidable alliance of the lawyer, the wealthy grandmother and her family and supporters, and a very tenacious and disruptive Maniaci. At one point Maniaci illegally used confidential tax records in testimony against us.

And the process was not without some coded homophobia. Early on, one alder informed us that he would not be supporting our proposal because his preference was for a young family with children. This is not something you say to a legally married gay couple raising a child. In fact, we started taking my son, Andrew, to the meetings to strengthen the image of our family – something we felt we should not have had to do (though it was a great civics lesson for him). And then there was the occasional e-mail or letter with the same coded homophobia. At one point in testimony, the wealthy D.C. grandmother testified, “God forbid the house should be painted pink and purple.”

At one particular low point—I think we had lost a committee vote—I became very discouraged. The injustice of being bullied by moneyed interests, combined with our alder sabotaging our efforts, made me very angry. We had to keep up the fight. In the end, we prevailed. At the final meeting where we needed Common Council approval, Ald. Satya Rhodes-Conway issued a public apology to us for having to endure the coded homophobia that was there throughout the process. She said, “I’m sorry, you straight people don’t hear it. But us queer folks do.” I was so moved that tears welled up in my eyes. It was very powerful and something I will never forget. The council voted overwhelmingly in our favor. We won.

We took possession of the house in mid-September. Because the house had been run as a bed and breakfast before, most of the infrastructure to get the business going again was in place. Furniture came mostly from savvy Craigslist finds. Ironically, we did buy a number of things from the Edgewater Hotel liquidation sale. We decided if we waited for the restoration to be complete, it could take five years. We decided to open. We held a soft opening over the Thanksgiving holiday, with family members of friends. By mid-December we set up a fully functioning website and online reservation system. We currently are undergoing a rebranding exercise and will soon have a new name for the B&B: Mendota Lake House.

One area in which I feel deficient as a gay man is home decorating: I need an expert and will be hiring an interior designer to make over the rooms once we get better established. All guest rooms are named after gay writers, and I’d like to have the décor match: The Oscar Wilde room is the biggest in the house, and I want it be over-the-top decadent. Then there is the Walt Whitman room, which I want to be simple and grounded in nature. For the Tennessee Williams room, I’m thinking “Southern decadence” (traditional, not so much the modern gay leather festival of the same name). And what to do with the Gore Vidal room…?

There are still some rather large restoration items that need to be addressed, too. We have quite a bit of water damage that occurred because the city failed to turn off the water when the building was abandoned. Then there is the ancient heating system that we plan to replace with a geothermal heating and cooling system.

After the spring elections, we hope to work with a new alder to get some much needed zoning code updates that will allow us to bring back private functions such as weddings and special events. It is important to me for the house to be a community resource. At some point in the not-so-distant future, I am looking forward to hosting gay weddings. Oh, and we have a wonderful view of Lake Mendota!

What Makes a Family?

When Bob Klebba and David Waugh applied to buy  the Collins House and turn it back into a bed and breakfast, I think they knew they were taking a chance. I don’t think they were expecting to put their family on display for public scrutiny.

Their proposal, to live in the house and operate a business (a bed and breakfast) in it, was up against another proposal from a family who wanted to live in the house and run a business (a sustainable food and farming operation) out of it. They were both good proposals, and should have been judged simply on their merits. If they had been, the decision-making process would have been a lot shorter and a lot less contentious than it was.

Instead, I believe the process was delayed by political retaliation and homophobia. Every time I heard the two proposals discussed, inevitably someone would say how nice it would be to have a family living in the house again—and they were never talking about Bob and David’s family. While the outcome was a good one in the end, the way we got there wasn’t pretty, and on the night of the council vote that gave Bob and David the right to purchase the house from the city, I felt I had to apologize to them. I told them that I was sorry for the ways in which their family was made invisible or discounted or made to seem less valuable than a straight family. Even if their proposal hadn’t been the better one, the nature of their family should never have been a subject of discussion or a factor in the decision.