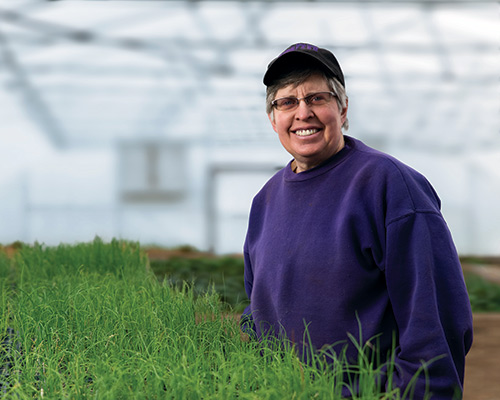 Sometimes things break down. And sometimes that breaking down process gives us the time and space to see a new direction forward, to change our lives, to grow something new.

Tricia Bross can point to several such instances in her own life—two in particular that involved a (different) car. The process of breaking something down to create new life, too, plays a major role in her day-to-day, having worked growing organic vegetables for the last 26 years. The purple awning of Luna Circle Farm has been a staple at the Dane County Farmers’ Market, where she’s been selling the bounty of her land since the time when she was just one of a few organic operations in the area.

Farming wasn’t what Tricia initially set out to do, however. Born in Boston and then moved across the country several times over, her family finally settled in tiny Wild Rose, Wisconsin when she was nine years old. There, though it wasn’t their main work, her family kept a hobby farm raising beef cattle, pigs, sheep, and chickens. Tricia showed cattle and sheep at the county fair—but always saw boys and men taking the lead in the work. She never imagined there would be a place for her as a farmer.

Life took many turns, including a stint at a religious college for her undergraduate degree. Just after graduation, though, her burgeoning awareness of her sexuality drew her to San Francisco.

“It was an eye-opening experience on many levels,” Tricia explains. “Unfortunately, it was also soon after the AIDS crisis began, so I saw many heartbreaking things as well.”

She held a job that was about as far from farming as you could get, working as an auditor for Bank of America. “I wore business suits and pumps to work every day,” she quips.

Her first experience with organic farming didn’t come until 1985, when she moved to upstate New York for graduate school. There, Tricia met her first fresh market vegetable farmers.

“This was more in line with my vegetarian status than animal agriculture,” she notes. “Plus, after dealing with my mom’s health crisis I was really thinking about the connection between food and health. So the organic side really appealed to me. This was also the first place I saw women defining themselves as farmers.”

It was, in fact, her concerns about what people put into the soil and water—and the related health impacts—that most drove her into organic farming. Her mother struggled with health issues, and Tricia dealt with digestive problems all throughout grad school while living a more sedentary life and eating “crap food.”

“Where I grew up in central Wisconsin the water table was maybe just 15 feet below the surface, so everything you put on the soil trickled quickly into the water system.” Once she started making those connections, she says, it felt like “signing our death warrant.” Tricia wanted to do something to change that process.

Fate, and a faulty automobile, also played their hands: “I fell in love with a girl who worked on an organic farm, and when my car died and needed repairs I worked out a deal with the farm owners to live there for a month while it was getting fixed,” Tricia explains. During that time, too, her digestive issues went away entirely. “I was eating good food and doing a lot of physically demanding work,” she adds. It didn’t take her Master’s degree to make the connection.

After that, Tricia and her girlfriend moved out to the east coast and worked on an apple orchard. They eventually broke up, and Tricia went south to Florida, where she worked for “the most racist person I’ve ever known” on an organic vegetable farm. It was a bit of a wake-up call, one she credits for “bursting my liberal bubble.”

“I had my idealistic image of organic farmers shattered when I realized that farmers are human too, and gender disparity and racial issues exist in the organic world as well.”

Around that time, another broken-down car caused another big fork in the road of life. It happened while visiting friends in Gays Mills, Wisconsin, and despite having always expected to settle on the east coast, Gays Mills was where she stayed.

Luna Circle farm began in 1990 with her then-partner, Ayla. They rented land from another woman, Jazmin. “All three of us were Scorpios. Talk about an emotional household,” she jokes.

Their initial challenges included finding an affordable space to live and farm. Tricia found that the transition from worker to proprietor, and having income go up or down based on the decisions she made, was a difficult one.

“I had some great success and made some huge mistakes,” she says. “The learning curve is very steep the first year or two. I think these are the kind of issues that any new farmer faces. We had some difficulty finding financing when we needed some equipment, and I think it was gender related. But we did finally get a small loan.”

The first goal of the farm was to teach interns how to support themselves by farming, but also to train other women to do the work. Tricia specifically aimed to teach women to “find their strength, to learn to move their bodies.” She taught women to use and repair power tools, chainsaws, and rototillers. “I also had some personal goals about wanting to learn to be as self-sufficient as possible and to leave a small footprint on this planet,” she adds. 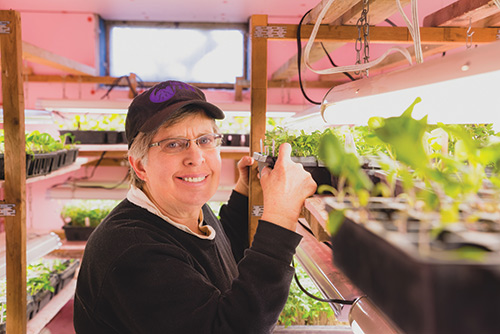 Through the years, the work has been both rewarding and grueling. Living off-the-grid meant pumping and hauling all of the water needed to maintain a vegetable farm on sloped ground in Gays Mills. Frequent heavy rains often washed the soil away entirely, leaving them to start over again or without crops at all.

Finally, in 2002, it was time for another major change. The weekly drive into Madison for the Saturday farmers’ market was long and left her so tired she often slept through all of Sunday. Her then-girlfriend lived in Madison and the distance was a strain. Her mother’s health had gone on the decline again, too, and she wanted to be closer to her. Tricia decided that she’d spent enough time putting in the long, hard hours required to maintain a life without regular access to running water and electricity.

She found a new farm closer to Madison in the small community of Rio, where she’s been ever since. Being able to come home to a hot shower at the end of a difficult workday has been a particular bonus of the change, Tricia says. She also switched from having live-in interns to hiring hourly workers. It’s meant less time to teach skills, but has freed her to pursue other projects while also recognizing that her body has different needs and capabilities now than it did when she was in her 20s and 30s.

She also says she’s come to appreciate having men as well as women working on the farm. It’s an opportunity to show them a co-ed environment where women contribute just as much to the operation, and for her to appreciate and use “the strength that comes easy to so many young men.”

As a small-scale, fresh market grower, Tricia feels the gender disparity is lower than in some other types of farming. However, she notes, sometimes in grower gatherings when the topic turns to equipment and mechanics, “I see lots of women fading out of the discussion. I don’t think that is a lack of interest, but rather a lack of the basic vocabulary to talk about things. I do think that on farms run by mixed-gender couples that the majority of the equipment work will be done by the guy—not all, but most.”

When it comes to how her fellow farmers do or don’t deal with her sexuality, Tricia also says she hasn’t had many overt problems. More often, it’s a battle of small assumptions and stereotypes. “I have at different events been asked who my husband is and how many cows he milks,” she relates. “That is just wrong on several levels.”

“I have on occasion had issues living as a lesbian in a rural, isolated area,” Tricia goes on to say. “I’ve had homophobic neighbors to deal with. But, I’m happy to say that is changing and people are more accepting.” 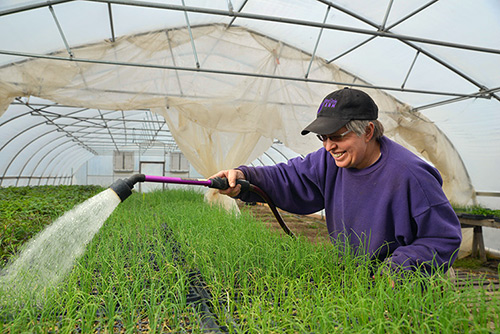 Through all the ups and downs, incredibly early mornings, bad weather, good weather, and overall very difficult work, Tricia still loves what she does. “

“I love being out first thing in the morning, hearing the cranes calling,” she muses. “I love seeing the spider webs, wet with dew and looking like strings of pearls. I love plowing the fields in the spring. Where else do you get a perfectly clean slate to start over each year? When I am mowing, I love to watch the ballet performed by the birds while they swoop to grab the bugs flying up from the grass. I love transplanting little plants—looking back and seeing a bed that was empty filled with plants.”

The people she’s known, loved, and worked with along the way are a big part of what makes it all worthwhile, too. “I have worked with lots of great people so I enjoy interacting with my crew each day. I love that my dog can spend the day running around with me. Twenty-five years later I still enjoy getting up in the wee hours every Saturday and going to the farmers’ market. My customers are the best. I enjoy the change of seasons and seeing the circle of life happening before me.”

Visit Tricia and Luna Circle Farm at the Dane County Farmers’ Market or online at lunacirclefarm.net to find out more about
the what they grow and where to buy (including through their CSA).