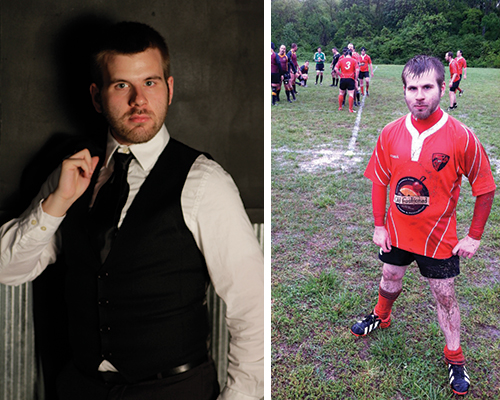 I keep envisioning a scenario in which I’m able to go back in time to see myself as a high school student, and tell my past self that now I play on a rugby team. I always picture my past self being incredulous, saying, “Really? That doesn’t make sense!”

I grew up in South Williamsport, Penn., a town known mostly for hosting the Little League World Series every year. We also lived close enough to State College that at the time, Joe Paterno was a legend, a god in our backyard. It was an expectation that you were interested in some form of sports and had some allegiance. Even if you didn’t care about sports, you could at least find some common ground in outdoor activities: bait machines were at convenience stores nearby, I learned how to shoot a rifle on a school field trip, and the deer hunting seasons were clearly marked on my school calendars.

To say I wasn’t interested in sports is not entirely true. For starters, manual dexterity has always been something that has been elusive to me. I struggled at cutting shapes and tying my own shoelaces for a long time when I was a little kid, which led to eventually hating anything involving catching things because I frequently fumbled when I didn’t get hit by a ball. Secondly, I was both a perfectionist and easily rattled by what other people thought of me. My frustration at not being able to keep up with other kids in athletics contributed to my waning interest. I did love playing soccer for a while, since it was something I wasn’t too bad at, but I remember other kids teasing me about my weight to the point where that was no longer fun either. I would say I didn’t miss it, but that was a lie. I remember all of the times I felt left out.

While other guys my age tended toward the areas that were more physical (and therefore more acceptable), I was drawn to computers, science, literature, philosophy, writing, drama, and social causes, all of which were more intellectual or were areas where my sensitivity didn’t seem like a curse. Still, I didn’t feel like I entirely fit in. My developing interest in both women (but not like other guys in my class) and men (but not enough that I thought I could call myself “gay”) just made me feel more awkward, so I tried to shove that aside.

In high school I focused more on discovering the meaning of life (and beating the occasional video game) than sports or sex and found more friendships online than offline. In college, I was able to get out of my shell more. Since there were more people interested in the same things as me, I was able to open up. After years of depression had taken its toll on my self-esteem, I worked out some of my issues in counseling. I continued to walk in my spare time, a habit I picked up in high school since it helped me think, and also helped slim me down a bit. It wasn’t until I moved here to Madison that I finally took the plunge and started seriously running. With that and some dietary changes, I went down from a size XL to an S within a year.

Even then, however, I found myself a bit paralyzed when it came to socializing. I still viewed myself as Too Sensitive Ugly Kid, and this made it difficult for me to go to any groups dedicated to running (“What if everyone else outruns me?”) or explore one of the martial arts classes I contemplated (“What if I keep on screwing up?”) or even just going to the gym (“How will I look?”). Despite all of my weight loss, I still saw myself as Too Sensitive Ugly Kid in the mirror and hated myself. I tried to shove that aside too, and it was sometime around then that—surprise! —I realized I liked guys more than I’d thought. Despite how this cleared up a lot of fog in my life, it was still confusing (“Do I like men more than women? Women more than men? What do I do?”), and didn’t help with coping with how I was losing interest in my career. All of this resulted in a crescendo of anxiety until the fateful call when I gave my family members two announcements: I was leaving my job for graduate school, and I liked guys (for the record, they were okay with both).

I learned about the Madison Minotaurs through friends I had made while I was applying for graduate school. I knew I wanted to do something to stay in shape and something to keep being social during graduate school. The people I met in the group were friendly and down-to-earth, and they answered any questions I had. Becoming a runner had made me into a bit of an endorphin junkie, so I wasn’t so nervous about silly things like “minimal protection.” I was prepared for that.

What I was challenged with instead was another aspect of the game that not many people talk about. Rugby is obviously known for how physically vulnerable you are, but part of learning and succeeding is being mentally vulnerable. In other words, I had to learn something very hard for me: that it was OK to fail. Pretty much every aspect of my playing style involved failure of some kind, and it was undeniably difficult for me to deal with. I fumbled balls, was horrible at throwing, did not know how to tackle properly, could only keep one new thing in my mind at a time, needed to communicate, and even needed to correct my running form. I kept comparing myself to everyone else, and “Too Sensitive Ugly Kid” became “Worst Rugby Player Ever.”

One other thing that surprised me about rugby, however, was this: practically everyone I’ve met, either on my own team or on other teams, was understanding. Sure, they might get frustrated if someone on the team was underperforming, but I learned that I wasn’t the only one who struggled with feeling like a failure. It didn’t matter whether I was skinny or fat or what my sexual orientation was or wasn’t or how much athletic ability I had. They were there for me, willing to help me overcome this, as painful as it could be for me. The great thing about being on the team has been the emphasis on doing as well as we can. I joined the team expecting to play a bit and be social, but I found that I looked forward to the playing even more than the celebrations afterward. Being able to train with more competitive players in the Wisconsin Rugby Club just gave me more motivation to improve myself, but to do so while realizing what I was good at.

So with that, and admittedly my own stubbornness, I just kept pushing. I attended as many practices as I could, even that one time when a sheet of ice seemed to cover the ball. I devoted time to working on my hand-eye coordination, my running form, and my overall fitness. I remember how proud of myself I felt when I was able to wear a jersey for my first tournament, and how I tried to tackle players much bigger than me (including once when I clung onto a guy’s legs as he ran like a rabid weasel). I remember how great it felt getting tackled in a gigantic mud puddle.

Being able to disentangle years of toxic thoughts helped me not only be a better rugby player, but also be more confident in my ability to overcome challenges. The fact that going back to school caused me anxiety? I ended up getting a 4.0 my first semester. Wondering where I fit in with my sexuality? I joined 521, a bisexual advocacy organization here in Madison.

Rugby not only made it possible for me to have an outlet for my perfectionism while curbing my self-loathing, but it also reminded me that allowing yourself to be vulnerable can help you get stronger and grow. If I did ever go back in the past and see myself in high school, still struggling with that self-image, I know how I would respond to Past Me crying out that playing rugby doesn’t make sense.