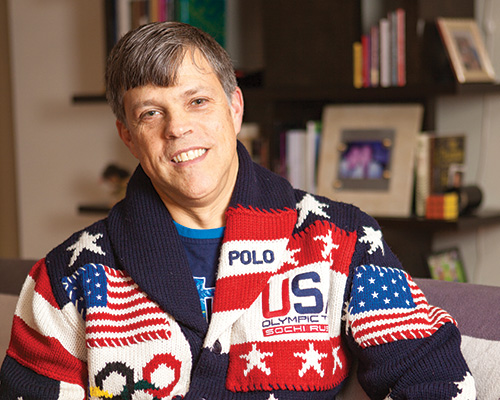 This past February I traveled to Sochi, Russia, to judge the Women’s Figure Skating competition at the XXII Olympic Winter Games. This was the fulfillment of a lifelong dream—something I have worked for as long as I can remember.

I first put on a pair of skates at the age of three. The rink was near my family’s office, and my mother dropped off my older sisters and me two afternoons a week as a convenient babysitting service. I liked to go fast, and I didn’t learn how to stop properly until I was about six or seven years old. When I needed to stop, I just crashed into the boards. For me, the thrill of racing in circles around the ice was exhilarating, which may explain why I am such a big NASCAR fan as well.

When I was seven, I graduated from basic group classes into private coaching and discovered that there was more to skating than simply speed and crashes. I began learning how to jump, and this is when my passion for the sport really took off. I can still remember how it first felt to lift off the ice and propel through the air—that feeling of being in flight. I was fearless and small, a killer combination, and I didn’t mind falling. I just got back up and started going fast again.

When I was 13 years old, my coach became pregnant and temporarily stopped coaching. She sent her best skaters to one of the top coaches in the country. That coach happened to be teaching in Philadelphia, where I lived at the time. Unfortunately, he coached at a rink that would not accept us as members because my family is Jewish. At the time, Philadelphia still had many sporting and social clubs that were very restricted. I was able to skate in the mornings and take lessons from my coach there, but we could not join the club. Being barred from membership in a club that I had earned my way into by being an excellent athlete was a hard lesson for an adolescent to learn.

Ultimately, it only made me work harder to be the best. I had the opportunity to train alongside world-class athletes such as Scott Hamilton. He was someone I looked up to, who inspired me, and with whom I maintain a friendship to this day.

After two years I joined the Wissahickon Skating Club, which would become my home rink for most of my career as a skater and a judge.

I went on to attend Emory University, in part because of the school’s outstanding reputation  and for the excellent coaches and training available to me in Atlanta. In 1985 I graduated from Emory and moved to Tacoma, Washington, for a year to skate full time.

In 1983 I competed at the US Nationals, placing 11th in the senior men’s event. In ’85 I won the US Collegiate Championships and placed second at the World University Games. In ’86 I stopped competing to join the family business, but I did not leave figure skating behind. I had started judging as part of a pilot program designed to keep people involved in the sport by giving athletes who were not interested in becoming coaches the opportunity to become judges. At that point I was mostly judging tests that would qualify skaters to compete. Once I retired from competition, I began trial judging—essentially practicing as a judge at actual events—and receiving appointments to judge more competitions.

I moved up the ranks, and in 1990 I received my national judging appointment and judged my first National US Figure Skating competition. This was a significant milestone for me as it put me in an elite group of judges and because as the youngest national judge in the country at that time I was judging skaters whom I had competed with and with whom I had trained not that long ago. It really marked the transition for me into the next chapter of my life in the sport.

In ’97 I received my international appointment from US Figure Skating. Since that time I have been fortunate to travel all over the world to cities like Tokyo, Paris, Budapest, and Moscow to judge, as well as some wonderful, out-of-the-way places I might never have otherwise visited such as Red Deer, Alberta; Gdansk, Poland; Ostrava, Czech Republic; and Jeonju, South Korea. In 1998, as a judge, I accompanied the first US team to travel to China for a competition.

In 2001 I passed my world exam, making me an Olympic-level judge. The next few years involved judging at the elite level of world figure skating competition both at home and abroad. I honed my own skills and worked with our athletes, helping prepare them to compete on the world stage. The two things I love best about the sport are the opportunities to travel and to mentor world-class athletes. There is no greater joy than seeing a skater I have watched grow from childhood enter the rink at a major competition and win the gold.

In 2011 I officially found out  that I would be part of the US delegation to the Olympics in 2014. For the next three years I had to commit myself to the sport to make sure I would be ready to meet the pressures of judging on the Olympic stage. In 2013 the Grand Prix finals were held in Sochi as a test event to help get the city ready for what was coming. The roads were rivers of mud and there were no hotels—we stayed in a sanitarium that had been cleared out to house the officials for the competition. I hardly recognized the town when I returned a year later and saw the gleaming park that had been built, through sheer force of Russian will, to house the games.

Everything about the Olympics was a thrilling rush. Top athletes, heads of state—I was surrounded by the elite from all over the world, and I was a part of it. I loved the competition and the thrill of judging under such high scrutiny. I also loved the camaraderie everyone shared in the park. I hung out with Apollo Anton Ono, who also knows a thing or two about going fast around the ice rink. I was a part of something bigger than myself, and I was representing my country in a show of international good will through sports.

What began as a way for my mother to keep me occupied in the afternoons had become a moment shared by the world. I spent my life going fast and jumping, and it took me all the way to the top of my sport.