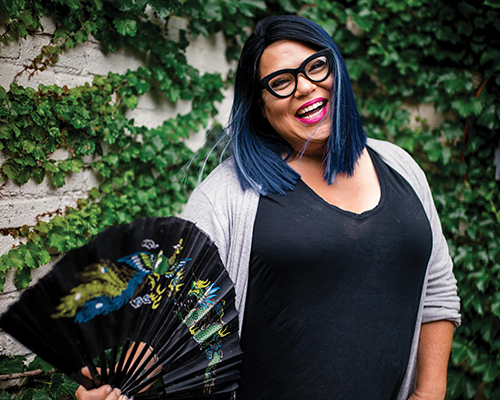 It was 2012, and I arrived in Madison during one of the hottest weeks of summer. At 102 degrees, I was like, “What fresh hell have I landed in?” I only knew four people, and one of them was a dog. I had left Los Angeles and was in the middle of the country, kind of perplexed at what I’d just done.

I’d been doing stand-up comedy for five years and was forging my way through that world. I’d had the honor of performing with some incredibly talented people. I never had to wait in line at the WeHo bars. Who pays cover anymore, anyway? It was a rude awakening to have to wait in line and not get VIP treatment, but I paid that cover and began forging my way through THIS world.

Imagine my surprise when I started working at a diner and I wasn’t the only trans person. HUZZAH! I loved working there, meeting people and really knowing them for the first time in a good decade. I made people laugh with my “restaurant humor,” and I kept them entertained.

My first show was an all-women’s lineup produced by La Bomba (aka Tulin) Waters. I was excited to be welcomed into all-female spaces. I submitted for Chicago Women’s Funny Festival, and got in…and headlined the show. This was amazing. For the first time I felt welcomed. I felt like I was part of something. I got to just be a woman in the middle of the country. Not a transgender woman, but a woman. Now don’t get me wrong, I love being a trans woman and am so proud of who I am and this journey, but Imposter Syndrome is REAL, and it’s a bitch.

These women’s spaces and these women comics I’d met were so incredibly supportive and absolutely empowering to be around. It was this that propelled me forward. I’ve done the Chicago Women’s Funny Festival every year since I moved here and, had it not been for the women I met through it, I would not be where I am today. These funny women asked me to be on shows and referred me to other producers. It was because of that festival, these woman and my deep yearning to work with and to empower women in the comedic arts that Lady Laughs Comedy was born.

All the Stand-Up Ladies

I started Lady Laughs Comedy Festival in 2016 as a way to foster women in comedy and to impact the Wisconsin comedy landscape. It’s turning out to be so much more than that. In our first year we had more than 70 performers for a three-day festival. Women came from all over. It was inspiring. We packed Plan B, Glass Nickel, and The Frequency. It was two days after the presidential election gone wrong, and it definitely felt like everyone was looking desperately for humor and commiseration.

This November throngs of women will be returning for the International Lady Laughs Comedy Festival. The invasion will be from November 7 to 11 and will showcase stand-up comics, storytellers, improv and sketch groups, and digital content. There will be four days for live performances and one day of films created by and featuring women.

Even though I’m running around like a madwoman during the vast majority of the festival, it’s an honor to facilitate these women as they connect, network, and do what they love.

This year’s festival will be bigger and will include some favorites from years past as well as plenty of new faces. We’ll start off with the “He’s Not A Lady” showcase, which is an all-male stand-up show. It’s their chance to make you laugh…and then we kick them off the stage for the remainder of the festival! We’ll also add the “They’re Not Necessarily A Lady” showcase to feature our non-binary comics in a show that honors and respects those who live in the spectrum.

If you’re not all that pumped for the fest by now, along with Plan B, Art In, and various venues that will host panel discussion and workshops, Saturday night will be at—wait for it—the Barrymore Theatre!

Now, you may ask, why is Lady Laughs Comedy so important? I mean, women are finally getting accolades from the media and winning Emmys, and just look at Hannah Gadsby, Michelle Wolf, and all of the other women taking over Netflix and the like.” Oh yes, we’ve made some lovely strides forward and we are being loud, unapologetic, and visible, but there is still so much work to be done. Until women, especially women of color, and LGBTQ+ comics and actors have the same opportunities, until every comedy club in the country books just as many women as they do men, there will be work to do.

Imagine my surprise when, just this year, I watched cisgender men in our comedy community—right here in “woke” Madison—victim blame, post transphobic material on social media, tell rape jokes, misgender people, and dismiss women, trans, and nonbinary people. Constructive conversations were shut down in the name of “civility.”

I watched as the men I thought were enlightened allies opened their mouths and total B.S. fell out. I’m not here to shame all of the men who are in the comedy community, as this reaches far beyond Madison and throughout this entire country. They’re not bad men. They’re just men who have been taught to be a man from and by an age that is no longer relevant. They’re men who don’t understand their privilege and the responsibility that comes with it. They’re cisgender, straight men who have never been confronted by women who are finally able to stand in their own power. They’re cisgender, gay men who are finally learning that it’s not OK to just “say anything” and to touch our bodies without consent.

Male privilege has permeated society so much that we don’t even see where it affects us until, well, it does. I’m grateful for good men, but they’re not immune to the traps that privilege has afforded them.

This is why Lady Laughs Comedy exists. It is a space for us to be ourselves and to not be at the whims of toxic masculinity. To have a safe space where we don’t have to listen to your rape and trans jokes and wonder what might happen to us when we’re leaving after the show. It’s a space where we get stage time and aren’t subjected to open mics and shows with no or maybe one other woman on it. It’s a space where we get to be in control and aren’t subjected to fragile masculinity that is just fighting against positive change.

Over the past several years of working with mostly women, I have found a comfort. I’ve found a space free from rabid competition. I’ve found encouragement and acceptance. I’ve found respect. If I could work with women and queer/non-binary people for the rest of my career, I would be so stoked.

However, we welcome men into our space and we welcome those who identify somewhere between because, despite problematic behavior, we need everyone to make a movement stick. To encourage equality while leaving anyone out is to not be equal, but we need space to make corrections so that we can find our voices and our power and so that men can take a step back and learn to see the value of (and develop real respect for) women, people of color, LGBTQ+ people, and the disabled community.

I don’t hate men. I date men. I love men. It’s just time that women have the stage. It’s our time to shine. Visit LadyLaughsComedy.com to find updated information and to sign up for our mailing list.