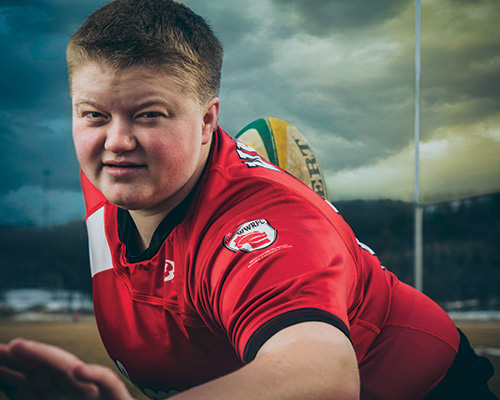 Curled up on the field with a girl much larger than myself on top of me, I lay winded, sore, and covered in bruises. Having just successfully tackled this girl, I could hardly believe I was playing in a Division I college rugby game and actually enjoying all 80 minutes of it.

It was only days earlier that I timidly arrived at my first rugby practice, being introduced to this crazy sport and surrounded by tough girls who spoke a bizarre and foreign language about rucks, scrums, mauls, and hookers. As I struggled to catch my breath, I caught a glimpse of my parents’ befuddled faces on the sideline, and I knew they were just as shocked to be witnessing this situation as I was to be living it.

Although I spent most of my life playing soccer, it was never a realistic option for me to continue to play competitively at a Division I school—but I also wanted to play at more than a strictly intramural level. My love of competition, desire to stay active in college, and passion for the camaraderie of team sports led me on a search for a new game.

While doing some research the summer before college, I stumbled onto the UW Women’s Rugby webpage. To my surprise, I knew one of the girls listed on the roster. Upon talking to her she assured me it was completely acceptable and even normal to attend an initial rugby practice without knowing anything about the sport. And, after attending my first practice, I was certain I knew even less than before. Even still, the girls were an enthusiastic, welcoming, and fun group, and the structure of biweekly practices was the motivation to remain active I was looking for. They all seemed to have a sense of responsibility to each other. Although I had just recently met them, I was already beginning to share in this sense of teamwork and perseverance.

While watching the team play their season opening game that same weekend, I saw the captain suffer a broken nose. As she came to the sideline bruised and bleeding, a parent who was a doctor looked at her injuries. It is a lucky coincidence that there always seem to be quite a few rugby spectators who are medical professionals. The girl asked if any more damage could be done if she went back in the game. After all, the team was short players, and she could easily shove a tissue or tampon in her nose to stop the bleeding. Against the obvious advice of the doctor, she was back in the game before I could even dissect what had transpired. Any sensible person would have advised me to run away and never look back. The respect I was gaining for these crazy and passionate players influenced me otherwise. From that moment on, I knew these were my people and I had found my family.

By the time I joined the rugby team, I was already out as a lesbian. It seemed to work out nicely that this was seemingly a very stereotypical lesbian sport. I figured I would conveniently find a community of other gay friends on my team, though during my first semester, I was shocked to discover that there were equally as many straight girls playing this intense contact sport. I was actually just one of two lesbians on the team at the time. Fortunately, I quickly discovered that rugby girls in general are a very open-minded and accepting bunch. Though it was not necessarily the big, gay college activity I was anticipating, many more LGBTQ people joined the team or came out as LGBTQ over the years. Sometimes I like to think that my being one of the first ones on my own team helped start that shift.

Luckily for those who stick around in Madison after graduation, we have a senior level sister team, the Wisconsin Women’s Rugby Football Club (WWRFC), which is the team I’ve played with for two years.

I recognize my bias but can confidently say that the rugby community is one of the most welcoming and fun communities around. The sense of belonging that I feel when I am in an airport wearing a rugby shirt and a stranger asks who I play for and in which position extends the rugby family beyond my own club or city. It’s like a built-in support system in even the least-expected places. If someone moved to a city where they didn’t know a single person, they could join the rugby team and instantly have 30 new friends. I think that this sense of belonging is very important for LGBTQ athletes in the sport who may be looking for community in new places.

In my time playing rugby, I have learned a lot about myself and found both structure and direction in my endeavors. Everyone that has been involved in my rugby career has played a big part in that. In college I was able to be free-spirited without judgment. Within my current club I have found balance between commitment to my team and commitment to my partner. Fortunately, she played rugby in high school so she both understands and is very supportive of my dedication to the game.

Folks within the rugby community often say that there is a place for everyone in the game. There are women who weigh 115 pounds and ones who weigh 250 pounds, and we all have different roles but the same goal. We have players who can run for days and others who can tackle the wind out of anyone in a quick swoop. We all have the same love for the game, and that’s what bonds us. We all have friends and family members who once thought we were insane for playing such an aggressive sport. To be honest, we probably are all a tad crazy. We hit and tackle people without protective gear for fun. That awesome feeling of stopping someone in their tracks by tackling them is one that never goes away, even when they’ve just knocked the wind out of you.