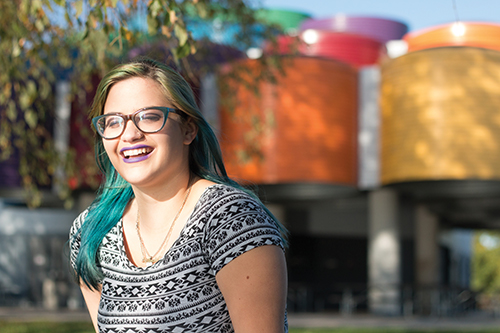 “I used to think I was the strangest person in the world but then I thought there are
so many people in the world, there must be someone just like me who feels bizarre
and flawed in the same ways I do.
I would imagine her, and imagine that she must be out there thinking of me, too.
Well, I hope that if you are out there and read this and know that, yes, it’s true, I’m here,
and I’m just as strange as you.”

I believe that everyone understands this quote at some point in their lives. In life, we find that we feel bizarre and flawed. Especially as a young queer person just trying to navigate their way through gender identity and sexuality, and as a mixed-race person trying to figure out which race they belong to, I felt, just as Frida did, I was the strangest person in the world. I felt insecure around my sexuality because I’d never met anyone who was Mexican and gay; I didn’t even know whether I was white or Mexican, or if I could identify as one without the other. All I wanted was to feel just an inkling of what the word “normal” was supposed to mean.

Even after finding a friend group of misfits and joining my high school GSA, something didn’t feel quite right. I was too misfit for the misfits, and I didn’t know who I was or who I wanted to be. I wanted to put all my energy into something, but I couldn’t quite figure out what. I wanted to be a better person than I was. Luckily, I found what I was looking for.

I started by getting in contact with GSAFE, an organization that helps high school and middle school GSAs organize, come together, and promote equity and justice. I also transferred to Malcolm Shabazz City High School, an alternative high school, where I started finding my place in the world.

My mom knew the GSA Outreach Manager at GSAFE at the time and got me in contact with him. From there I started attending meetings for GSAFE’s Youth Leadership Board (YLB), which exists to give an inside look into GSAs and tell GSAFE what high schools need from a high schooler perspective. YLB has given me so many opportunities to work with students outside of my high school and even outside of the city I live in. I’ve attended conferences with folks from Superior, Appleton, Milwaukee, La Crosse, and almost every corner of Wisconsin anyone could think of.

From YLB I was able to join Proud Theater, an activist theater group that believes in change through art. During my second and last year in Proud Theater, I had the pleasure of becoming a Youth Artistic Director of Religion, which means I would write and direct a piece revolving around religion, as well as oversee religious matters in the group. I was also part of the Youth Artistic Committee, which is designed to act as a communicator between adult mentors and youth in the group.

But I think GSAFE’s Leadership Training Institute (LTI), an intensive, four-day camp for queer youth to better their skills as activists, had the most impact on me. I first attended in 2014 as a camper, and I discovered myself in ways I never imagined. LTI helped me become the person and activist I wanted to be, and helped me hone my skills so I could be a better leader. I was able to find who I was as a queer person just trying to navigate their way through gender identity and sexuality, and as a mixed-race person trying to figure out which race they belong to. I was no longer the strangest person in the world because I found the people I imagined to be just as strange as me.

I was lucky enough to return to LTI as a peer mentor in 2015, a position only six youth can take after they’ve attended the camp. I was able to create workshops, lead a small group of youth in discussions around race, identity, queerness, and activism, and work with five other incredible youth who were just as passionate as I was about activism. I had this wonderful experience again in 2016 when I returned to LTI as a senior mentor, a position only two youth can have at a time, where I was able to hire and lead a team of peer mentors, create workshops and themes, and set a curriculum for the camp. I couldn’t imagine a better thing to do than inspire people to be activists, and I couldn’t imagine a better way to spend my summers and Thursday afternoons.

So who am I now? What has all of my experience with activism amounted to? Well, the person I am loves animals and people alike, and enjoys writing spoken word poetry. I am Chicanx, meaning that I am Mexican-American with mixed indigenous and Spanish descent, and I am genderqueer, meaning that I don’t identify as either male or female, but outside of that binary. I am an activist and artist, and I am stubborn and determined. I look up to powerful Latina women like Frida Kahlo, Malinalli, Sylvia Rivera, Gina Rodriguez, and, of course, my mother.

I am a student at Lawrence University in Appleton, and I am beyond excited to start my journey here. I hope to create positive change here, too, and wherever else my journey takes me. I hope to one day work for an organization where I can help youth become activists and create change, just as I did and will do in the future. I want to help students realize their potential and feel a little less bizarre and flawed because they know I’m there for them. And to that person who feels they are the strangest person in the world because of who they are: I hope you read this, know that yes, it’s true. I’m here, and I am just as strange as you.