Kat and the Hurricane 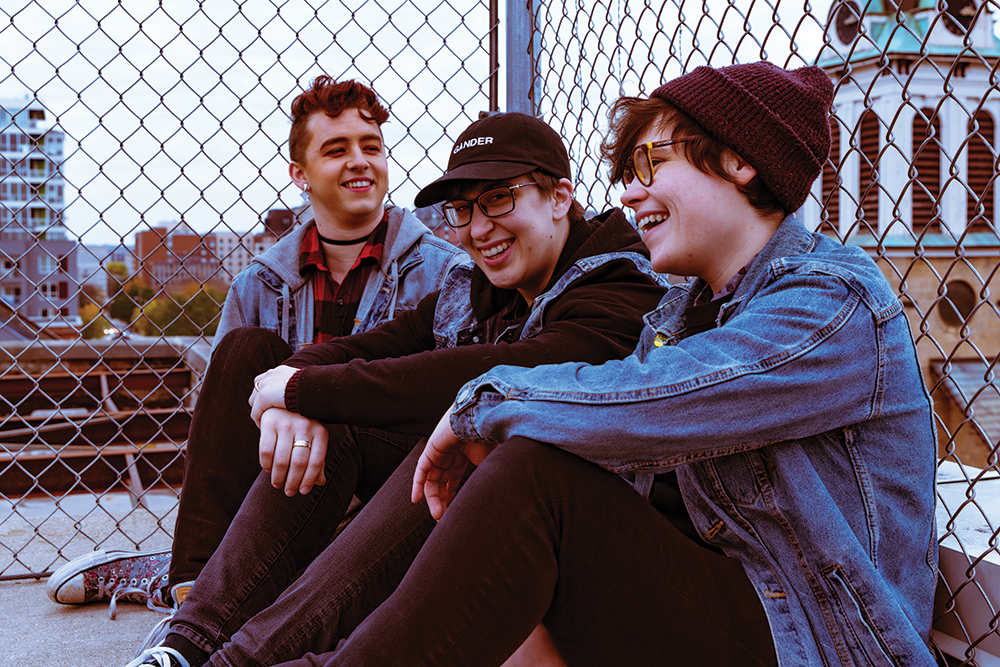 Singer-songwriters Kat Farnsworth and Benjamin Rose first sang together in January 2018. They performed “Over You,” a song written by Farnsworth, during an open mic night at Mocha Moment, a small café in Janesville. It wasn’t until 2019, when the pair moved to Madison and met drummer Alex Nelson, that Kat and the Hurricane became the genre- and gender-bending indie rock outfit they are today.

For Kat, Benjamin, and Alex, making heartfelt music is simply part of their DNA, just as being queer is part of their DNA. As genderqueer musicians with a penchant for the melancholy, the band describes their style as “sad lesbian music.” Though tongue-in-cheek, this moniker describes how their genre influences, emotionality, and gender identities are inseparable from their music.

It’s not that Kat and the Hurricane only writes “gay songs,” whatever that may mean, but even as they sing about trauma, heartbreak, mental health, and healing, they are creating space in the music world for unapologetically queer musicians.

Having been part of the first ever Pride festival in Rock County (an event that has been one of the band’s favorites to play), Kat and the Hurricane understands the importance of representation and community. The struggles of being out in a smaller town is all too familiar to many within the LGBTQ+ community. Since calling Madison home, the three-piece have built relationships and shared bills with many other queer musicians, gravitating towards those who share the same experiences and passions.

In the past year, Kat and the Hurricane has been hard at work carving out their own space in the indie music scene, both in Madison and beyond. They released their second EP, Libra, in February, won the titles of Best Local Band – Alt/Indie (Madison Magazine) and 2020 Breakthrough Artist Runner-Up (Madison Area Music Association), and put together a 10-day Midwest tour (which was unfortunately cut short by the COVID-19 pandemic).

For Kat and the Hurricane, music is everything. Music is their vehicle for emotional healing, for self-discovery, and for creating community. Their “sad lesbian music” pulls at the heartstrings and reflects their experience as queer individuals, but it is also hopeful and easy for anyone to connect with. As close friend and collaborator Candace Griffin writes, “With passion, poetry and relatability, Kat and the Hurricane’s music expresses more than just the somber parts of life. Their music is ever-evolving as life itself.”

Kat and the Hurricane