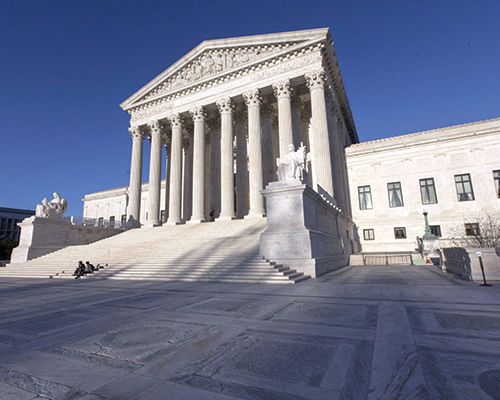 In 2012, Charlie Craig and Dave Mullins asked Jack Phillips, owner of Colorado’s Masterpiece Cakeshop, to bake them a wedding cake. Marriage for same-sex couples wasn’t available in Colorado and marriage equality had not yet been recognized as a constitutional right.

Phillips said no. He felt that, by making the cake, he would be participating in a celebration that was contrary to his religious beliefs. The couple filed a claim with the Colorado agency that enforces the state law prohibiting discrimination in public accommodation (selling goods and services) on the basis of sexual orientation.

The agency found that Phillips violated the law. By the time the case got to the U.S. Supreme Court, it was teed up for an epic battle between the baker’s constitutional right to exercise fundamental freedoms (speech, religion) and Colorado’s authority to protect the rights and dignity of gay people. The Court, in the June 4 decision Masterpiece Cakeshop v. Colorado Civil Rights Commission, did not explicitly resolve that battle because, in finding Phillips in the wrong, the Colorado agency expressed hostility to Phillips’ religious beliefs.

The Court therefore decided Masterpiece on narrow grounds unique to this dispute. It found that by not considering the case with “religious neutrality,” the agency did not give the baker fair consideration, thus violating his free exercise rights. That is good news, given fears that the Court could have endorsed discrimination when cloaked in religion.

Lose the battle, win the war

Even better, seven of the nine justices, including newly appointed Justice Gorsuch and Chief Justice Stevens, explained that prior cases “make clear that the baker…might have his right to the free exercise of religion limited by generally applicable laws,” and that “while…religious and philosophical objections are protected, it is a general rule that such objections do not allow business owners and other actors in the economy and in society to deny protected persons equal access to goods and services under a neutral and generally applicable public accommodations law.”

Not one Justice, not even the most conservative, endorsed discrimination. (What about the other two justices, you ask? Justice Ginsberg wrote a strongly worded dissent, joined by Justice Sotomayor, arguing that the gay couple should not lose the case given the Court’s clear recognition that the Colorado law appropriately protected them from discrimination.)

Thus, as the ACLU put it, we may have lost this battle but we won the war. The Court affirmed the legality of laws protecting us from discrimination, even when discriminators claim their motivations are religious. Masterpiece does NOT give businesses a license to refuse goods and services to LGBT people. Where government forbids such discrimination (so far, 19 states and numerous municipalities), those laws are valid.

The ruling already in action

An excellent demonstration of this point is an Arizona state appeals court decision issued three days after Masterpiece. In Brush & Nib Studio v. City of Phoenix, the Arizona Court of Appeals held that despite the calligraphy business owners’ religious beliefs, they cannot refuse to sell merchandise for same-sex weddings because Phoenix law prohibits discrimination on the basis of sexual orientation in the provision of goods and services.

In ruling that the Phoenix nondiscrimination ordinance did not violate Brush & Nib’s First Amendment religious and speech rights, the Arizona court extensively quoted Masterpiece. It explained that if Brush & Nib wants to operate a for-profit business as a public accommodation, it cannot discriminate against potential patrons based on sexual orientation.

The Arizona court then explained that the Phoenix nondiscrimination law (like similar laws throughout the country) regulates the conduct of selling or refusing to sell merchandise, and while such conduct “may incidentally impact speech, it is not speech.” The court concluded, “An incidental burden on speech…is permissible” when a law promotes a substantial governmental interest that would be achieved less effectively absent the law*. The Phoenix ordinance satisfied that requirement.

(*The Arizona court found a 2006 U.S. Supreme Court case, Rumsfeld v. FAIR, to be controlling. In that case, several law schools had argued that a law forcing them to allow on campus military recruiters, like other employers, when the armed forces banned gays from serving, effectively forced the colleges to endorse the ban and violated their free speech rights. In Rumsfeld, the Court found that providing the military equal recruitment access was merely an incidental burden on the colleges’ free speech rights, and therefore the colleges had to allow it.)

Early reactions to the release of Masterpiece suggested that the end of equality as we know it had arrived. One highly respected LGBT rights group sent out an email falsely saying the Court had ruled against our civil rights, and urged readers to send money immediately to “fund the fight.” Headlines in mainstream media said the baker won—technically true, but incomplete—inspiring readers to buy the paper or click through for the full story.

To be sure, we should not be surprised if bigoted business owners buy the misleading headlines and claim a right to discriminate against LGBT people. And there should be no doubt that the Alliance Defending Freedom and its ilk will continue to push its discriminatory agenda cloaked in religious belief and search for courts willing to endorse that agenda.

It is equally sure, however, that faced with such claims, most courts will follow longstanding precedent like that discussed in Masterpiece, as well as Brush & Nib, to protect our equal access to goods and services.