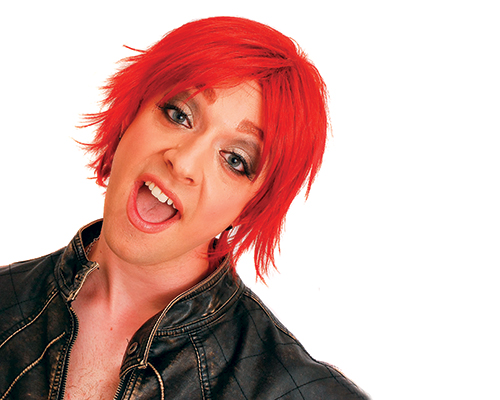 My name is Joey Broyles and I am myself.

It took a long time for me to embrace me for me. Since that moment, the world has been full of opportunity for some gay kid who grew up in the Midwest with a dream to become a superstar. For all the years of regular hardships, I’m finally living out my dreams, and I’m still in a state of shock over it.

Currently, I run a business called Project Famous: a trinity made up of an artist collective, a publication (Project Famous Magazine), and a film production company. My friends and I aren’t in it for the money; we are in it to change lives and to make a difference for artists. Life is too short to do something you don’t want to do, so we go out and do what we dream. As great as this all sounds, life wasn’t like this a year ago.

Last year, I took a step out of my own world and revaluated everything, asking myself two serious questions: Who are the people fighting for you? Who are the people fighting against you? When I let go of the past and my damaged relationships, I found myself. In the next couple of months, I took a lot of chances, and it wasn’t easy building a community out of one idea: to create a place where artists can come together and create a gallery for our generation and beyond. The birth of Project Famous (PF) became the silver lining and hope in my life. On the PF questionnaire page, there was one question that mattered to me when you joined: What is your dream job? People don’t ask you that when you apply for a job, because for most, dreams are over, and now it’s time to make money and play the game of life.

With PF we created a hybrid system of networking, inspired by Warhol’s Silver Factory. I wanted to take that idea and build a better network for artists, and I found a way: Get artists of all mediums together, and you can do anything. Strength in numbers. The networking we’ve done in one year would have taken the “normal” person two or three.

The transformations within the collective are beautiful; seeing other people smile because they are on the right track is life changing. I myself transformed from an introvert who was a daydreamer to an extrovert who broke down major barriers in my life. I have written lyrics for local musicians, I am in the middle of recording an album, and I just wrapped production on a short film/music video I wrote, produced, and acted in. These things only happened because I learned that when you help others achieve their dreams, others help you in return. And guess what? Helping others helped me conquer one of my biggest fears: my own community.

Even though I am gay myself, I was terrified to embrace my own community. I spent many years listening to what society was saying about our community, and it was unhealthy for my relationships and for me. One day I woke up and I thought, “These people are just people, and why am I afraid of someone like me?” I let the whole world tell me how bad I was for being myself. I had silenced my own self and lost out on years of making positive connections with other gay friends. When I started to deny everything I was taught by society, my world became free. My sort of anarchist approach to society opened the door to the world of drag, the world of fantasy, the world of the LGBTQ community. I began writing my album, and I decided I was going to make sure to include gay topics that I feel the general public will not address in mainstream music.

In February, I heard a mother scolding her son for a toy he picked out. You could hear her politely say to her son, “Boys don’t do that.” I heard it again from another mother while at work, and it brought up a lot of memories from my own childhood. It hit me so hard that I began writing a song called, “Boys Don’t Do That.” A song about all the taboos I experienced growing up in a “blue is for boys, pink is for girls” society. Simple things like sharing a kiss in public, holding hands, and dancing with another boy are still a big deal. You can feel the eyes on you and the fear and hatred as you do things that are “normal” for heterosexuals in public. Why is it wrong to be yourself?

The most gratifying part about writing this song was hearing what others had to say about it after I performed it. Someone said, “It was universal and it made me really think” about what boys can or cannot do. It made them think, and that’s what made me happy. If we can make more people think about anything at all, we might change the world. That was worth bearing my soul in front of 500 people at the High Noon Saloon, and I would do it again in a heartbeat. I’d rather be scared and show the world who I am than live in fear, so let’s bring on the fear and face it head on.

My goal in life is to continue doing the things I love while maintaining a healthy relationship with my loved ones and our beautiful community. I never want to be afraid of the best parts of who I am. Maybe I can’t change the whole world, but I hope to continue helping others by making music and art. I love art, and I love being gay, and I want everyone to know that being yourself is the coolest thing you’ll ever be a part of in life. Our artist collective, Project Famous, invites all walks of life. If you have a dream, come and hang out with us, and we’ll figure this life out through art and embracing who you are.