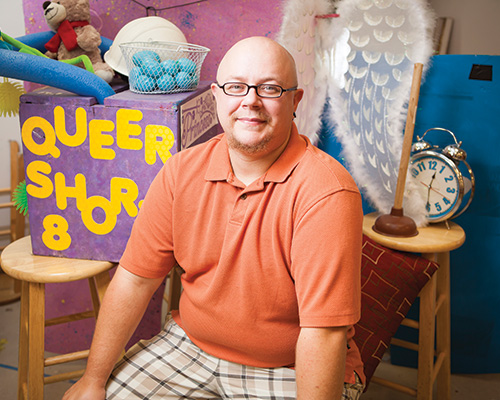 I never considered myself a theater geek, but, now in my thirties, I’ve found a calling.

I always wanted to be creative and knew that I just had to find the right medium to showcase what I could do. Then I found a place in theater. It all started on a whim and a bit of an “Oh-my-gawd-I’m-turning-30” crisis. My interest in theater had been sparked a couple of years before after seeing a friend in a play called “Vamp.” Afterward I thought that acting could be fun, but then fear started picking at my brain. I kept talking myself out of auditioning: Who was going to cast a transman? I was too short and feminine looking (in the face and chest) to be cast in any of the male roles, and my voice was too deep to play any of the female roles. Heck, if people found out I was trans*, they probably wouldn’t want to touch me on stage, so what was the point? I eventually put the idea aside and left it alone for a while.

Flash forward, back to the OMG30 crisis; thankfully, by this point I’d met a wonderful woman who liked me for who I was, and I had developed more confidence as my transition progressed and I was seen as male by the rest of society. I really had no excuses not to audition. The next step was to actually go for it, but it was close to the end of the season for many production companies, and I didn’t know where to look until my friend Kristin told me about Queer Shorts, StageQ’s annual production of short plays.

Going into the audition I was nervous as hell. First of all, I went to the wrong place. Secondly, by the time I got there I was late. And lastly, there were people there with headshots and actual resumes; that freaked me out! It was a great relief when the producer, Katy Conley, warmly welcomed me to join and fill out some very simple paperwork. I knew from that point on Katy was going to be a great person to work with, and I was right!

I auditioned, went home, and then waited with anxiety to see whether I would be cast or not. I didn’t have to wait too long because the next day I got a phone call from Katy, who said she just knew she had to have me and asked if I would like to be in the play. Of course I said yes! At that moment I felt accepted, validated, and had a sense of pride for just putting myself out there. Now it was time for rehearsals to start and to take on the challenge of remembering lines.

My part was fairly small, and that gave me a lot of time to come up with ideas as the director thought of props she would like to have or use. I started offering up suggestions or volunteering to make a certain item, and next thing I knew I was making or finding a number of props for the show I was in as well as for some of the other Queer Shorts. This was it! This was the passion, the fire, my thing I was good at, and I loved every minute of it. Clearly my excitement was quite obvious because one night backstage Katy came up to me and asked if I would like to be the Props Master for Queer Shorts next year. Heck yeah I would! That moment was the launchpad to my props career.

Since then I’ve been Props Master for a number of StageQ shows, and this season is the first time I have been PM for every show put on by the company; they have even asked me to be the resident Props Master. I am truly honored. I have also been approached by other companies and theater groups like Proud Theater and The Madison Opera to be Props Master for their shows.

I can’t express how grateful I am for the opportunities and experiences I’ve had and for the family I have gained through the theater who couldn’t care less that I’m trans* and really only care about the quality of work I produce.

Finally, I have to thank Kristin Forde and Katy Conley for spreading the theater bug and everyone that I have worked with in theater for being there every step of the way; there are too many to list, you know who you are! Thank you for letting me shine outside of the spotlight and allowing me to be who I am.

To see some of props I have made, as well as some of the leather work I’ve done, visit facebook.com/odditiesandalterations.