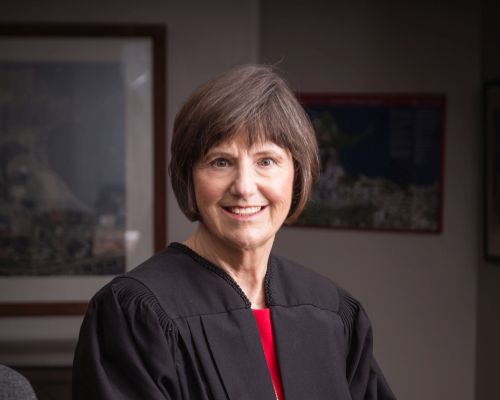 Editor’s Note: The Spring election will be held on April 3, 2018. Find your polling place, registration info, and who/what’s on your ballot here. We printed an interview with the other candidate for this position (Dane County Circuit Court Branch 1), Susan Crawford, in our January 2018 issue.

I’ve known you for 30 plus years. Both of us have been working for equality and justice for decades. In that struggle, sometimes we see advances and sometimes we seem to be going backward. What keeps you going?

Well, for me it has always been clear that to advance fairness and equal justice, we need to be vigilant. The work is never done. What keeps me going is the knowledge that the people I represent, and the work I do as a Municipal Court Judge, makes a difference in making the world more just. I also believe deeply that the law, applied fairly and equally, has the power to change lives for the better and protect our rights. You and I have both seen that, to borrow Martin Luther King Jr’s phrase, the “arc of the moral universe” needs a lot of help to keep bending toward justice.

You learned early about challenges people face, didn’t you?

I did. I grew up on a farm in northern Wisconsin. My mother was a first generation American. Both my parents grew up during the Great Depression. Neither of them finished high school. There were eight children in my family and my parents taught us the value of hard work, education, and the importance of never giving up. They also taught us the importance of giving back to others.

Is that what drew you to the law as a career?

I wanted to be either a teacher or an attorney. There was a strong sense in my family that it was important to find work that made people’s lives better. I feel very fortunate that my career has, in many ways, let me combine the best of both teaching and the law.

As a Municipal Court Judge, most of the people in my courtroom are there pro se, which means they don’t have an attorney. In all court proceedings, but especially for people without a lawyer, it is critical a judge take the time to clearly, respectfully, and carefully explain what is going on. It is really important to make sure all the individuals involved in a case understand the law, the charges, their options, and the consequences of the choices they make.

As an attorney, I handle civil rights and employment cases.  I’ve practiced in courts throughout the entire Wisconsin Court System. My practice is about people and I work directly for individuals. The men and women I represent have been treated unfairly. They usually don’t have a lot of resources to fight back. They are often upset and emotions can run high. The law can be daunting.  I spend as much time as it takes to make sure my clients understand what the process entails and what the law is,  so they know their options and can effectively participate in their own case.

You won an unanimous decision in the Wisconsin Supreme Court last year. The outcome was impressive, but what struck me about that case was that you did it for free.

I did. I handled it from beginning to end without charge to the client. It was an important test of a fairly new law. Many people told me it was an unwinnable case. But I knew from the start, when I met Ms. Operton at the Unemployment Compensation Clinic, that it was a case that had to be tried. In all of my law practice, I do as much work pro bono as I can, which means I do it at no cost to the client. Some attorneys have rates of hundreds of dollars an hour and many individuals, especially those who are seeking unemployment compensation, can’t afford those fees. Being sure people have access to justice is another value I bring to my work as a Municipal Court Judge and as an attorney.

We’ve talked about a number of things but not yet about the race for Dane County Circuit Court. Election Day is April 3. How are things going?

Judicial elections matter.  For more than 35 years I have sought ways to make the world more just. I want to put my judicial and legal experience to work on the Circuit Court as a leader in initiating ideas and in working collaboratively with stakeholders inside and outside the Courthouse to reduce racial disparities and improve access to justice. It would be an honor to serve the people of Dane County.

David Clarenbach is widely credited with helping pass the first law in the country (1982) assuring gay and lesbian people equal rights in housing, employment, and public accommodations. First elected to public office at the age of 18, he served as a Dane County Supervisor, Madison Alder, and State Representative.