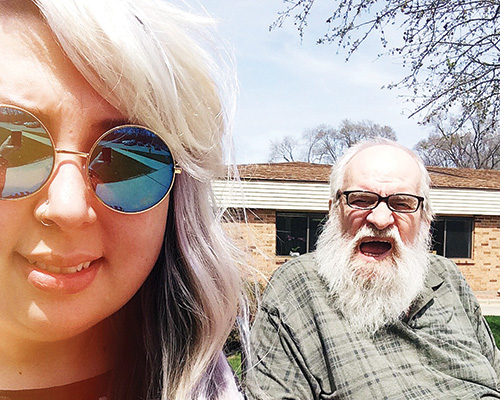 Two years ago I moved my 80-year-old father to Madison to care for him. We have always been close, we are so much alike, and we have the same ridiculous sense of humor. Care-giving for him deepened our friendship, and about six months in some of the questions from my childhood started creeping back into my mind.

My whole life I felt like something was off. As a child, I knew my family was different, but I just couldn’t put my finger on what it was. I remember asking questions and not being satisfied with the answers I received. It hit me one night as I was driving home from his apartment.

I turned the car around and went back. I opened the door and without hesitation asked, “Are you gay?” As the words fell out of my mouth, a sense of calm came with them. I felt as if all of my childhood questions were finally answered.

That night started a conversation that he had been waiting his whole life to have. Over the last year and a half my father has shared with me things he has never told anyone: Stories from the 1940s and the neighbor boys. Stories about married men in the factory where he worked for 34 years. Stories about the lovers my mom and dad shared. Stories about Bobby—these are my favorite stories. Bobby was one of the great loves of my dad’s life. The unrequited love story that had a span of 10 years before my dad took a chance and, one night, kissed Bobby.

One of the major question marks from my childhood was a fight my mom and dad had over going to say good-bye to Bobby. My mom didn’t want me to go, but my dad insisted. There are very few times that my dad stood up to my mom. He usually let her have her way. Not this time. Bobby was dying, it was the late eighties, and my mom was afraid it was AIDS.

I questioned my dad about his love for my mother and the other female lovers in his life. He has been married to three women, and I wanted to know where they fit into all of this. He assured me that he had loved my mother and was attracted to her. He explained his attraction to women and that it never felt quite right for him to say he was gay. Gay just didn’t seem to fit. In conversations since he has said, “gayish,” “slightly gay,” “Aren’t we all a little bit gay?” and most recently “bisexual.”

Through the honesty and bravery of my father sharing these things with me, I started to question my own sexuality. As I was questioning my feelings, I started going on dates with women. I started to picture my life with a woman. I started telling friends, and I noticed myself having trouble explaining what I was feeling. What does it mean if I’m not a lesbian, but I’m in a lesbian relationship? I started saying some of the same things my dad had said. “I’m kinda gay. Gayish.” “Well, I wouldn’t say I’m straight.”

At first I was beating myself up for nearing 30 years old and just figuring out that I might not be straight. How did I not know? Then one day I was talking about all of this, and I had a flash of a memory. I was about four years old, having a play date with a friend in a tent in my backyard. She told me about a new game. We took our clothes off, and she lay on top of me. My mom came to check on us, and when she saw what we were doing, she lost her mind. I had never seen her so upset. She was yelling and screaming and shoving our clothes back on. She marched us over to my friend’s house in total silence, which was way scarier than the yelling. I don’t remember what was said, but I know she shamed us. I believe that is why it never occurred to me to be anything other than straight. I didn’t know why the game in the tent was wrong, but I knew it was wrong. The shame of that day closed me off from questioning and opening my heart to the possibility of being bisexual.

The conversations with my dad have helped to heal both of our hearts and to end the shame we have both experienced. This past year I have thought about writing this hundreds of times. The more we talked about it and the more I thought about it, I knew it was important. Society wants bisexuals to choose, pick a side. People will assume you are gay but just not ready to admit it. If you fall in love with a person of one gender, people will assume you that you are no longer bisexual. Part of why I wanted to write about this was to tell my truth and to tell my dad’s truth. I wanted to add two more faces to what it looks like to be bisexual. I wanted my dad, at 82, to be free. I didn’t want this or the fear of being found out hanging over his head for one more day.

This piece, in longer form, originally appeared on Rosalee’s blog, The Grey Ghetto (thegreyghetto.com), and is rewritten and printed by and with the author’s permission.