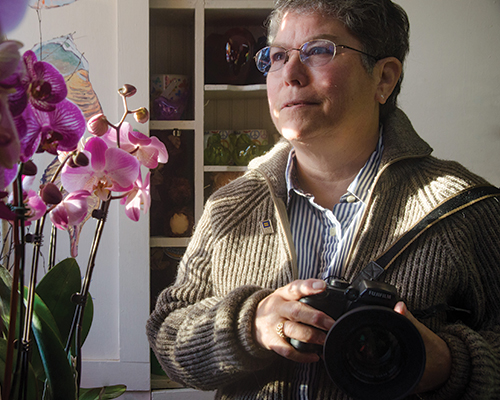 In an artist statement posted near her work at the OPEN group show at Absolutely Art and Café Zoma last November, Janis N. Senungetuk wrote, “Eleanor Roosevelt stated that ‘the future belongs to those who believe in the beauty of their dreams.’ From the age of three, when I declared that I was an artist, I have kept that dream alive.”

When Janis was three years old, so the story goes, a neighbor asked her what she wanted to be when she grew up. “I am an artist,” Janis declared. Being an artist was not some career track she was planning on pursuing as an adult; it was core to who she was, who she had been, and who she would be. She was, if you will, born that way.

Janis began “formally” studying art when she was seven years old and took classes at the Kansas City Art Institute. She later received a Bachelor of Fine Arts in painting at the San Francisco Art Institute, where she graduated with honors. She went on to get her Master of Arts and Master of Fine Arts from Northern Illinois University in printmaking and drawing. It was in 1980 while pursuing her master’s degree that Janis first developed vision problems. Her eyes tired easily, and once-vibrant colors were suddenly fading to gray.

The first doctor she consulted misdiagnosed her condition, believing that her sight was merely strained from the intensity of her work. When her vision continued to worsen, she went to a specialist, who diagnosed her with diabetic retinopathy. He was able to stop the disease’s progress, but unfortunately, permanent damage had already been done. Much to her relief, a later surgery was able to return color vision to her right eye, though she remains legally blind in the other. Vision impairment, however, never stopped Janis from being who she is as an artist.

In fact, in 2007 Janis was awarded the Madison Arts Commission Signature Grant, the highest award the City offers to an artist to create a new body of work. She used the funding to put together her solo exhibition Bold Visions, hosted by the Wisconsin Council of the Blind in December of that year. Bold Visions highlighted Janis’s fine art nature photography, composed of computer-manipulated images. The higher contrast and heightened colors enhance the clarity so that sight-limited viewers can still perceive the images and enjoy the work.

Though Janis has long been an activist for LGBTQ equality and social justice, her politics have never made it into the subject of her work. Perhaps her persistence to keep making art despite numerous health and economic challenges is in and of itself a sort of politicized stance. Making work about the beauty of the natural world and of life that celebrates light, nature, and the colors that she never takes for granted has always served as a respite from the difficulties of existence. She enjoys creating work that affirms these simple pleasures and she is happiest when sharing them with others.

A few years ago, Janis completed a certificate in social media at MATC. Then, to help other artists market and promote their work, she started a consulting business called JNS Creative Vision that develops social media solutions for creative businesses. At this point in her life, she is most concerned with sharing the knowledge she has garnered over the past 30 years, enjoying time with Sue, her partner of 31 years, visiting with her daughter, Jennifer, and her grandchildren, and being in the garden. She wants to collaborate with other artists, contribute positively to her community, and of course, continue being an artist for as long as she lives.

For more information about the artist, visit: http://nussbaumsenungetukstudio.blogspot.com