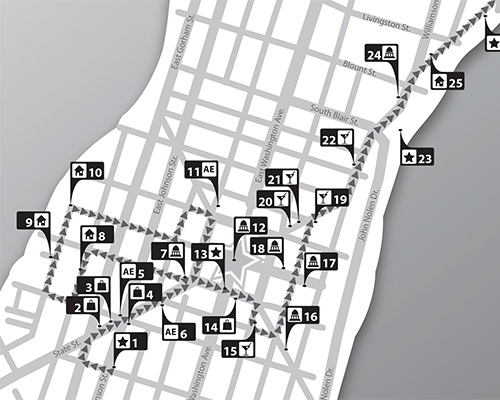 The outdoor café space of 319 Gorham Street | This much-mourned womyn’s space was a very popular bar, restaurant and community space. An unfortunate fire took it away and caused much lamentation. The name derived from the Greek play of Aristophanes where women seek to control their destinies and shape a world dominated by men by withholding sex from men in the interests of peace.

341 State Street | An LGBT-friendly place where community leader and fantastic gardener Richard Kilmer has been helping folks with medical needs outside the world of commercialized pharmacies.

319 State Street | One of the longest-lasting gay-owned businesses to have contributed to the vitality of Downtown. Owners Chuck Bauer and Chuck Beckwith were known to boogie at the town’s annual Frostiball high society soiree. Buy your good-smelling soaps and fancy lotions here.

307 West Johnson Street | Borrowing a title from bisexual Virginia Woolf on the personal liberty needed by women to write, the store has always been a good source for LGBT books. LGBTQ authors are sponsored at the bookstore as part of the widely popular Wisconsin Book Festival. A great place to pick up a gift.

201 State Street | The bartender from the gay bar The Pirate Ship, Bill Ferris, was surprisingly elected Sheriff in 1972. The Ship’s parking lot was a place where cops would note down license plates during the decades of oppression. The Ship, and an older community civic center, were torn down as part of the new Overture Center. The community’s New Harvest Foundation was launched in the Civic Center in 1985. Later the community’s annual New Year’s Eve bash, the Pink Party, was held for many years in the old Civic Center’s Marquee Room.

122 State Street | In a building housing many environmental and women’s organizations, the LGBT civil rights organization Fair Wisconsin fits right in. It fought the unfortunately unsuccessful effort against the Wisconsin Constitutional Marriage Amendment of 2006 here, but then persisted and turned around and won statewide domestic partners legislation with the help of Governor Jim Doyle and Democratic legislative leadership in 2009.

133 Gilman Street | This historic Mansion Hill building housed a group of all gay men including a number of activists who helped make early community efforts succeed among the contributors to the Gay Renaissance newsletter, the first of the gay press in Madison.

140 Langdon Street | The gay writer known for his play, “Our Town” and the 1927 Pulitzer Prize-winning novel The Bridge of San Luis Rey, was born in Madison in 1897. He spent his early years here till age nine. His father was editor of the Wisconsin State Journal.

This student housing site was an early site for gay activists and community social events in the 1970s. This was a time when gay activism was on the cutting edge but still semi-underground.

113 East Mifflin Street | Home to StageQ and other theater groups who have presented many LGBT-themed productions over the years. The community theater groups benefit from a joint facility that always has people ready for their close-ups, Mr. DeMille.

The Capitol is the locus and focus of the town and the center of so many LGBT things as well. Here in 1982, Wisconsin became the first state in the nation to pass a gay rights law prohibiting discrimination on the basis of sexual orientation in employment, housing, and public accommodation. Originally sponsored by Rep. Lloyd Barbee, an African American from Milwaukee, the measure was successfully championed by Rep. David Clarenbach. Today out members Rep. Mark Pocan and Sen. Timothy Carpenter continue a tradition of advocacy. The legislature was the political nursery for Wisconsin’s two out members of Congress—Rep. Steve Gunderson and Rep. Tammy Baldwin. When Governor Anthony Earl appointed Ron McCrea as press secretary in 1983, newspaper headlines screamed about the appointment of an avowed or practicing homosexual. McCrea quipped he did not need any practice. In 1989, the Capitol hosted the Fifth Conference of LGBT out public officials, the first in a state capitol. In 2009, the Wisconsin legislature passed domestic partner legislation championed by Fair Wisconsin. Wisconsin was the first state to do so after a restrictive constitutional marriage amendment.

The Square with its pattern of circumference circulation has a long history going back at least to the 1950s as a late-night cruising spot. The presence of nearby hotels with traveling single men may have contributed. The former Belmont Hotel coffee shop (now part of the YWCA) used to be listed in the old gay guides of the 1960s.

12 South Carroll Street | This great cheese emporium with top-flight selections is among our friendly gay-owned businesses. Its selections make great gifts as well as consumables. Take-outs include a selection of sandwiches with wonderful cheeses and other items.

117 West Main Street | This popular, comfortable gay bar does good lunch business and has existed seemingly forever on a block that has a long history of other popular gay bars including Going My Way (aka the Gong Show), and the Rainbow Room.

215 South Hamilton Street | Here in the new location, and formerly in the old courthouse, gay and lesbian judges have administered justice in an inclusive manner. Circuit Court George Northup contributed to task forces on positive judicial views in dealing with HIV issues in the courtroom and Circuit Court Judge Shelly Gaylord is a former member of the Governor’s Council on Lesbian and Gay Issues.

210 Martin Luther King Jr. Boulevard | The City of Madison passed the first Gay Rights City Ordinance in Wisconsin in the mid 1970s, an ordinance which survived the Anita Bryant era attacks when the Madison Community United was formed to defend it. Dane County followed in 1980 with the second gay rights ordinance in the state. The first openly gay official was James Yeadon in 1976, appointed as alderman and elected in April 1977 before Harvey Milk was elected that same year. Many out officials follow including County Board Chair Dick Wagner 1980 and County Supervisor Kathleen Nichols 1982 who both would later co-chair Governor Anthony Earl’s first in the nation Council on Lesbian and Gay Issues. Others include the first out Hispanic official in the country Alder Ricardo Gonzalez and an early out Republican Alder Jim McFarland. Usually 10% of the Madison City Council and County Board have been out—a tradition carried on today by Alders Mike Verveer and Satya Rhodes-Conway and Supervisors Chuck Erickson and Kyle Richmond.

418 East Wilson Street | An institution founded and now run again by Ricardo Gonzalez. As a Madison Alderman, Ricardo was the nation’s first Hispanic elected, out official. The area was the location of other popular LGBT bars over the years including the Back East, a bar with a good lesbian following and the gay bar Maneuvers (now Hotel Ruby Marie’s).

At Machinery Row, 601 Williamson Street | Home of the Coast Guard Auxiliary, which for many years was headed up by a gay “admiral”.

711 Jenifer – In the 1920s, a resident amassed a collection of physical culture magazines with nude and nearly nude men in artistic poses.

735 Jenifer – In the 1970s, several fiber artists resided on the block and had an informal Stitch and Bitch Club. Otto Thieme who resided at 735 was known to make erotica lace in fine patterns depicting homosexual acts.

739 Jenifer – In the 1950s and 1960s, this was the home of Keith McCutcheon and Joe Koberstein—the center for a very active gay salon and social circle. Keith published poems that in veiled language talked of gay love. From the 1980s to the present the home of local gay activist and out former County Board Chairperson Dick Wagner. Here, the New Harvest Foundation was created in six months of discussions in 1984. The first in the Big Ten LGBT Alumni group held several early receptions for LGBT speakers.

741 Jenifer – Nationally known Women’s Studies professor Jean Boydston resided here with her partner Joy Newmann. Both were also artists and had their studios on the lakefront side.

754 Jenifer – Some of the first big gay house party fundraisers were held here—the Alice B. Toklas Birthday Party for the United and A Night in Key West for the Gay Center. Celebration maven Dan Curd, a longtime block resident, designed the parties. Over the next several decades, the house had many gay tenants including one who sponsored a nude cookie bake for a number of years by gay fans of the Mazomanie clothing optional beach.

800 block of Spaight Street | This cruisey gayborhood beach was the site of activism by the “ladies tops off club” for a while. This beach became more quietly notorious for its late-night, after-bar, gay skinny-dipping.

924 Williamson Street | Popular gay bar and dance club opened in 2009 to a broad LGBTQA following. The Amsterdam leather and drag outfitter is across the street.

1119 Williamson Street | Home to many gay playwrights and original productions including the remembered “Oklahomo.” Broom Street has been part of avant-garde theater in the city for decades.

29. Orton Park at the corner of Few and Spaight Streets

The corner was home to George Segal’s Gay Liberation Statues. Today, a plaque and benches commemorate the installation’s visit.

1202 Williamson Street | Many supportive efforts are housed among the organizations associated with the center.

1221 Williamson Street | From its inception, the Co-op has been a gay friendly community institution and source for gay press and publications. Perhaps the trademark purple aubergine was a giveaway.

1442 Williamson Street | Theodore Pierce resided in this home for almost all of the Twentieth Century and was active in the town’s gay circles from the 1930s. Described best by the French term “boulvardier,” he was a font of knowledge with classical allusions.

Home to Rep. David Clarenbach during much of his legislative career. Now the home of one of the town’s many lesbian power couples.