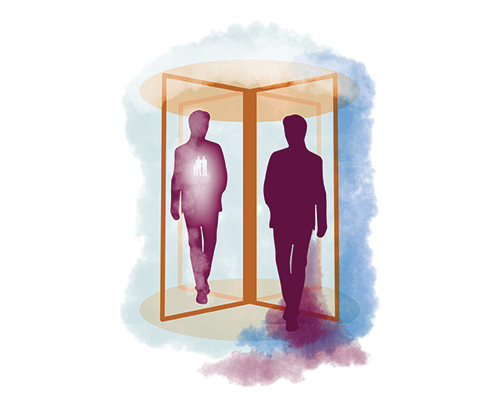 The lack of such a picture is not due to his feelings toward me and our relationship. He simply wants to avoid potentially negative issues at work. While the issue of a gay elementary school teacher might not even raise an eyebrow among some, there are others who may not be so understanding. After all, he may try to recruit their child into the homosexual lifestyle! It would take only one disgruntled student or parent to make a fuss and serious problems could arise. You may have noticed that I am also not using even his first name in this article.

Yes, we do live in Madison—wonderfully accepting Madison. However, my partner does not teach in Madison. As a non-native Wisconsin resident, I’ve noticed over the years how Madison is a very unique “bubble” in the middle of a much less liberal state. In other words, one does not need to venture far to find a much less prevalent attitude of acceptance when it comes to LGBT people.

Initially, this was going to be the subject of my article: my partner the teacher and how he is in the closet in his classroom. However, I think there’s a much bigger issue than that. As many huge strides as LGBT people have made in terms of acceptance, we still have a long way to go. And until we get to that time when LGBT people can be “out” anywhere and anytime, we often find ourselves dealing with what I am calling “The Revolving Door Closet.”

My partner is out to his family, his friends, and even his fellow teachers and administration. But in his classroom, he’s closeted. He might resist me saying that, but I think we are in the closet any time we do not feel comfortable with people knowing that we are gay.

Did I mention that we have a daughter? We do! She came into our lives when she was fewer than five months old. She is now almost 13. She is a wonderful human being, and our lives are so much richer for having her in them. She is also quite shy and never wants undue attention drawn to her. She has always been very comfortable with having two dads (it’s all she’s ever known), but she also knows that this is far from “the norm.”

I know that my partner is not alone in dealing with the “revolving door.” I know this because I too still deal with it from time to time (more often than I would like).

My friends, my family, my boss, my coworkers, and pretty much anyone who matters to me know that I am gay. I’m as open as I can possibly be in most situations. However, my work sometimes takes me to communities outside of Madison, outside of that safety bubble. There are occasions when I have removed the ring I wear on my left hand—the one placed there over 13 years ago during our union ceremony. Why do I do that? Often I give presentations about communication and the topic of how attendees’ home lives relate to their work lives. I remove my ring to avoid questions that might come up about my “wife.”

Do I enjoy removing my ring? Do I enjoy not mentioning my life partner? Does he enjoy not having pictures of his partner or current pictures of his daughter in his place of work? The answer, of course, is a resounding “no!” We do those things—we jump back into that revolving door—to avoid awkward situations. Does it feel phony, disingenuous, and untrue sometimes? Absolutely!

You know, right after I typed that we do these things “to avoid awkward situations,” I realized that it’s so much more than just that.

I was relatively late coming out when I did so in my late twenties. As many of you probably also experienced, it was not without difficulty; however, it felt so freeing to fling that closet door open. No more “just haven’t met the right girl” or “too busy for a relationship.”  At last, I could be my true self.

Could I really, though? Can any of us ever truly be? I don’t know the answer to that.

I do know that being gay bashed certainly can serve as a reminder that it may not always be safe to be completely out. When I was in my late twenties, I was ambushed while sitting in my car. I was, I thought, flirting with another young man who was standing beside his car. I was in a park—the only place in my Kansas hometown where I had heard people like me could meet one another. As fate would have it, the other young man must have been the lure. Suddenly fists were coming at me through my car window. I heard things like “Get the faggot out of the car!” I must have been punched in the face 10 to 15 times. They tried very hard to get me out of my car or at least get the keys so I couldn’t drive off.  Somehow, as I was being pummeled, I was able to close the window, start the car, and get the hell out. My face looked like I had been in a particularly rough boxing match. If they had gotten me out of the car, I’m not entirely convinced I would have survived the night.

Naturally I have lived my life since that time quite differently in terms of being out. I’m out when I feel I am in a safe place. That really makes me no different than my partner. Even though he doesn’t necessarily fear gay bashing, his reasons for jumping into that revolving door closet are just as valid. He fears negative repercussions from students and their families for both himself and our daughter.

I worry sometimes. I worry that we are sending a message to our daughter that being gay is something that has to be kept hidden. My hope is that she sees us being open and affirming about it often enough that it makes up for those times when we are not. In speaking with her, we have always been open and honest with her about who we are as gay men, but more important, who we are as human beings. We have also been honest in telling her that there are people in the world outside our home and especially outside of Madison who would not accept our relationship and certainly would not accept us as her parents. Have I mentioned that she is an amazing girl who is becoming an amazing young lady? She is. She gets it. She has always known that she has two parents who love her unconditionally, and she has always loved us (even when we remind her to brush her teeth or lose our patience when she moans about homework).

So…the Revolving Door Closet. Is there a solution? For anyone? It’s part of our lives, and we do the best we can to navigate those waters. We have a good life…a really good life. I’m sure many of you who identify as LGBT take those occasional trips into that closet as well. It may not be fun to be in there, but at least we always know that a trip back out is in the very near future. There was a time in this world when no one was ever out of the closet, so we have come a long way. My partner and I will probably not be around to see a time when even a teacher in rural Alabama can proudly display a picture of his husband or her wife without fear of repercussions. But that time is coming—it is most definitely coming! My hope is that our daughter will see that time.