The Wisdom of Years 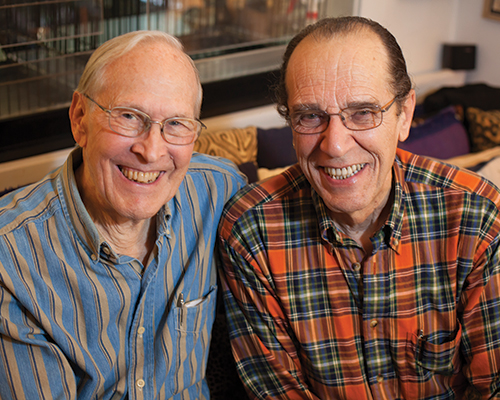 Clarence P. Cameron has achieved what many only dream of: He loves and is loved by his partner of 51 years, and he has spent most of his life creating. Clarence is often referred to as “The Owlman” because he has created owls over nearly the entire span of his career, first in clay and later by carving soapstone, a medium he still works in today. He also works in metals—pewter, copper, and bronze.

Clarence credits his partner, Bob Lockhart, for supporting him and contributing to his prolific career as an artist and full fascinating life here in Madison. Bob was himself a very successful creative professional. Now 83, he is retired, but for many years he was a graduate architect doing what he loved best: working with many families, in Madison and elsewhere, designing new homes or remodeling existing ones.

The couple has been together since November 17, 1961. Bob was 32, had previously spent two years in the Army, and was serving an architectural apprenticeship in Spring Green. Clarence came to school here as a pre-med student in 1959. Though he was initially in denial about being gay, when he met Bob in 1961 he fell head over heels in love and never looked back.

Timing is everything. Clarence, then 20 years old, received a letter from his draft board later that year. It asked him if he had any mental or physical deficiencies. His honest answer was, “I am an active homosexual.” Needless to say, 50 years before the repeal of “Don’t Ask, Don’t Tell,” the military sent his 4-F card without much ado.

In 1965, Clarence opened a hobby ceramic shop and started hand-building things out of clay. Starting a business with little capital was challenging, but with support from his family and Bob, he made it. He had borrowed $1,500 from his dad to buy a car and to start the business.

Bob designed and built a booth that fit inside his convertible “like a Russian doll.” Then they began the art fair circuit, and over time, Clarence built a very solid following. Impressed with their wide variety and binocular vision, Clarence started creating owls. At one point, the Associated Press even picked up a story about his clay owls. After 26 years working in clay, he desired a change and turned to carving soapstone.

His soapstone owls have been widely exhibited, and since 1989, they have been included in the Leigh Yawkey Woodson Art Museum’s international “Birds in Art” juried exhibition ten times. Clarence is also widely appreciated in local art circles for having co-founded Art Fair Off the Square and for founding the nonprofit Wisconsin Alliance of Artists and Craftspeople, Inc., sponsor of that fair along with the Winter Art Festival at Monona Terrace. At 71, he still manages to exhibit at those two art fairs in Madison, as well as maintain his own website.

In their half-century relationship, Clarence and Bob have seen much progress in gay rights, and acknowledge that they may have had children of their own if that had been an option for them when they were younger. Their families of origin were ahead of their time in accepting them. His parents, Clarence says, “accepted Bob like another son.

When asked to describe the secret of their long-lasting relationship, Clarence says, “It is trust. I know he is there for me; he knows I am there for him.” Then he adds, “He takes care of me. He cooks, cleans, and almost waits on me hand and foot.” If Clarence’s words offer some wisdom for all who wish to have long, loving relationships, it seems to come down to this: trust and care and support each other’s dreams.

For more information about the artist, visit owlman.com.