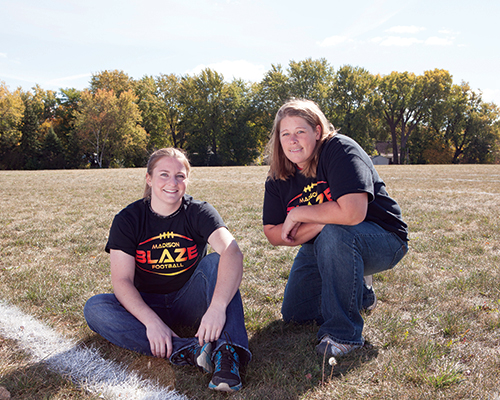 How did you get involved with the Blaze? What made you want to join?

Jessica:  While I was in high school, I was a three-sport athlete. I have always enjoyed team sports. While in college at UW-River Falls, I played on the college softball team for four years. When I moved to Madison just over a year ago, I was looking for ways to meet new people. I knew there was a women’s tackle football team in town, so I decided to try out. It was one of the greatest decisions I have made. I have met many wonderful people, and my best friends in Madison are my teammates! Rebecca:  I had seen an article about the Madison Cougars in the Wisconsin State Journal, and a few of my coworkers encouraged me to try out. I looked up the website and sent an e-mail. I received a response within minutes. I had always wanted to play football since I was a child. In middle school, flag football was the first opportunity, but I was told that because I was a girl, I was not allowed to play. When high school began I asked again. I was told no, so my mother went to the school board and asked them to allow me to play. They again told her no, that girls were not allowed to play football. When I heard about the women’s team in Madison, it raised the same excitement and the same fear of being let down.

What is the mission of the team?

Our team, although under new management, is the same great team that we were last year: hardworking, determined, and focused. Our mission is to “promote and advance women’s football in a professional manner while sustaining a positive identity in the community through leadership, guidance, and sound management.”

What is the biggest challenge you faced when you started?

Rebecca:  There are a lot of challenges that I faced in the beginning. First and foremost is personal fear. Not letting myself hold me back. There has never been one thing in my life that I have done solely for myself. Every sport, function, or job I have worked at, I have known someone prior to being a part of it. This was something I wanted to do for me. Another challenge I faced was my age. I was a rookie football player at 33, and people questioned whether I could start at that age. My physical condition was also a challenge. I had two-thirds of my right lung removed when I was 21. My limitations are very few, but also brought questions from family and friends if I could perform with everyone else. I might be slightly more winded than everyone else, but it doesn’t hold me back. Jessica:  I guess the biggest challenge I faced was being so excited to have the opportunity to play, but we didn’t officially start practice until January. Once I decided to play, I was super excited and just wanted to start working out and learning the game of football!

How would you describe the culture of women’s football? Is it similar to that of other sports?

Jessica: Women’s football is somewhat similar to other women’s teams I have been on, but this group of 30 women has formed a bond that I have never experienced on another team before! When an organization goes through changes in ownership and experiences some difficulties, you would expect that players would lose interest and trust as teammates, but we stuck together like glue. The women who play for the Madison Blaze are not only teammates, but we have also become a family. Rebecca: The culture of women’s football is unlike any other team or sport that I have ever experienced or been a part of. You join this team and this league for the love of the game and the chance to fulfill a lifelong dream, and come away with so much more. I have never been closer to a group of women and men. There is a respect among the players and coaches throughout the whole league and those who support us. We all know what we have sacrificed to play, coach, or own women’s football. We always hold ourselves, our teammates, our coaches, and our owners to a higher standard, while trying to keep a positive image at all times on and off the field and letting people know that we are serious about the game of football.

How do you perceive the role of the team in the greater LGBTQ community?

Jessica:  I think the role of this team is to show the community that if you are a lesbian or not you can enjoy playing sports. The Madison Blaze organization wants to be known throughout the Madison area for being a winning team on the field, but also be an example of great leadership throughout the community. Rebecca:  We definitely try to play a role in the LGBTQ community. We participate in Pride every year and hold fundraisers in predominately gay establishments, but we are also trying to make ourselves known in the straight community as well. There are some beliefs that we are purely a lesbian football team and cater only to the LGBTQ community. But the truth is, we don’t carry any one title. We are women tackle football players, trying to pave a new road in the game of football and give back to all communities.

Tim Lom is a member of the Madison Minotaurs rugby club, Wisconsin’s only International Gay Rugby Association and Board team. He’s excited to be contributing to Our Lives and help various members of the sports community have their voices heard and their stories told.