Why Immigration is an LGBTQ Issue 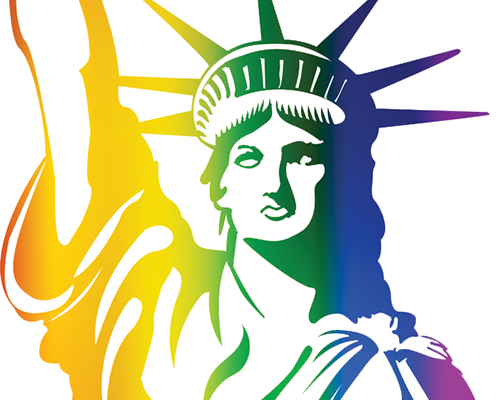 We often think of human issues as separate. More often than not, however, they are interconnected. This is especially the case when we talk about issues of oppression and marginalized communities. Here is where intersectionality plays a critical role.

Intersectionality is often described as the interconnectedness between different identities, such as gender, race, social class, colorism, and so on. These characteristics are all affected by systems of oppression and discrimination. Immigration and LGBTQ identities are no exception to this.

Recent stories about immigration have been making headlines. Our current administration is practicing violations of human rights for asylum seekers, and the Human Rights Watch, CNN, and the ACLU illuminated stories of abuse and neglect. LGBTQ immigrants are at heightened risk of these abuses.

While the majority of us could not possibly state that it is “easy” being part of the LGBTQ community anywhere in the world, there are countries and regions where being LGBT is a death sentence. The level of humiliation, harassment, gendered views, religious views, and legality vary drastically, as well as the actions based on these views. Additionally, further characteristics may add to the existing ones. Racism and colorism are perfect examples. In countries where there is discrimination against people of darker complexion (yes, this is common outside the U.S.), LGBTQ people of darker complexion experience racism or colorism on top of discrimination for their gender identity or sexual orientation.

The spectrum of legality varies substantially across the globe as well. In countries like Sierra Leone and Turkmenistan homosexuality is legal for women but not for men. Also, in countries where homosexuality is illegal the punishment varies from temporary imprisonment, life in prison, or the death penalty. Even in countries like Brazil where LGBTQ legislation has improved and is considered progressive, the rates of violence against the LGBTQ community are substantial. As stated by Newsweek, a new research study indicated that “500 LGBT Brazilians suffered violent deaths at the hands of homophobia in 2017.”

In the case of transgender people that flee their home country, it is usually a matter of life or death. In Latin America, the increased gang violence, harsh economic realities, and often traditional gender views play a role as to why some LGBTQ people immigrate to the U.S. The economic realities of Latin American countries with a competitive workforce further disenfranchise LGBTQ people who face discrimination. Transgender people that live in poverty and do not have the means to “pass” or have access to hormones or surgery often face harsher discrimination and harassment. Additionally, powerful gangs often coerce transgender women into prostitution. Many face extortion, are threatened, or even killed.

As a result of continuous overlapping hardships, some LGBTQ individuals have chosen to seek asylum in the U.S. It wasn’t until 1990 that the U.S. even allowed LGBTQ people to apply for asylum. Prior to that, America deemed LGBTQ identities as ‘sexual deviation’ and not worthy of protection. Now, migrants are allowed to apply for asylum in the United States by law, but in order to receive approval must demonstrate that they have suffered persecution or have credible fear of it based on race, religion, sexual orientation.

As their cases are decided, and often denied, they remain in detention centers. The average time a transgender person is detained is 99 days, whereas cisgender people have an average of 44 days.

It has been reported that transgender immigrants have suffered abuse while in the detention facilities. Some have been sent to solitary confinement for “protection” from harassment from other detainees while others have been sent as a result of discrimination. This practice puts these immigrants at increased risk of abuse by guards. Transgender detainees are 97 times more likely to experience sexual abuse or assault as their cisgender peers.

Recently, The Guardian and other news media reported on the death of Roxana Hernández, a Honduran transgender woman, who died of health complications five days after being in custody of U.S Immigration and Customs Enforcement (ICE). The heightened risk of abuse and the substandard medical care as demonstrated by Roxana’s case demonstrate the atrocious conditions faced by LGBTQ immigrants who often come seeking safety and refuge from persecution.

The intricacy of the asylum seeking process goes further in the courts. Transgender people coming to the U.S often use the term “gay” as a general self-identification term. However, this can have unfavorable consequences based on the legal difference between the terms gay and transgender. Without proper representation, adequate terminology, and compelling evidence, transgender people can face deportation back to the adversity they were trying to flee.

Our immigration system is flawed, and many people are starting to pay attention to the harmful ways our government treats immigrants and asylum seekers. Stories of families being separated at the border have awakened the American public to the atrocities committed in our names. As we organize for LGBTQ rights, we need to ensure the safe passage of immigrants and asylum seekers and understand the broader context of discrimination faced by LGBTQ people around the world. Contact legislators and pressure them to treat immigrants better. Vote people into office who are committed to ensuring the safety of all LGBTQ people.

Immigration IS an LGBTQ issue. Today more than ever.

Owen Karcher is a bilingual art therapist, author, and social justice educator. He co-founded the Center for Community Healing in Madison, WI to provide high-quality therapy to people with marginalized identities.