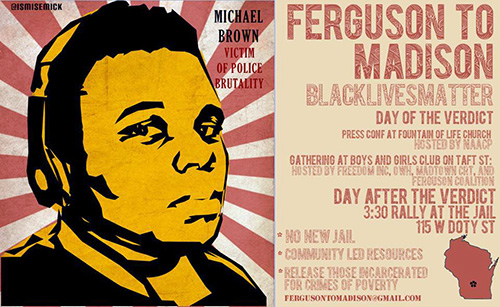 We are the Young, Gifted and Black Coalition. We are young Black women, queer folks and feminist men who are fighting for Black liberation. Many of us have been to Ferguson and participated in the actions and protests, which have led this movement, and have also created a sociopolitcal moment where the entire nation is engaged in a dialogue on policing, state violence, and the human rights of Black people.

This coalition is led and founded by: Freedom Inc, Operation Welcome Home, Madtown Community Response Team, and Justice and Equity of Dane. We have formed this coalition because as we know, and is pointed out in Ferguson and history, the movement and its solutions must come from us young people.

We are here to stand in solidarity with the efforts of Ferguson and it is about justice for Michael Brown. However, it is also more broadly about the issues of state violence against Black communities. In Madison it looks like mass incarceration. In Milwaukee it looks like the police killing of Dontrae Hamilton and mass incarcertion, and in Detroit it looks like poverty and a host of other issues.

1) No new jail — Immediately abandon and denounce the proposal of a new jail. We instead propose human rights solutions that make jails obsolete. Some of those are implementing the Human rights of housing, food, education, and health care for Black people

2) Immediate release of people incarcerated due to crimes of poverty — We understand that poverty is a form of state violence, and that in Dane County 75% of Black children are living at or below the poverty levels, and that almost 5% of the popuation is Black and yet the jails are over 50% Black. We know these are related. Therefore we demand the immediate release of all people who are incarcerated for crimes of poverty.

3) Investments in initiatives led by young Black communities so that we can create change, and liberate ourselves.

“It is our duty to fight for our freedom. It is our duty win. We must love and protect one another, we have nothing to lose but our chains.” —Assata Shakur