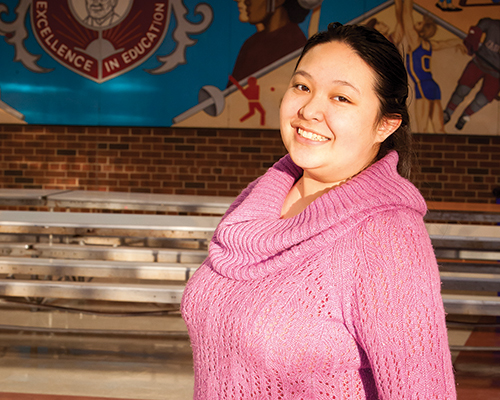 I am a queer, biracial, teenage, cisgender female who has a voice in my community. Living in Albany, Wisconsin, and going to school in Madison, plus being an activist, can be a struggle—but I wouldn’t stop for anything, because my voice needs to be heard.

I still love doing teenage things like going on Tumblr and hanging out with my friends. Working with the Gay-Straight Alliance for Safe Schools (GSAFE) gives me a chance to learn and be an activist, but the organization and the people in it also give me advice during the weird time that is being a teenager. It also is a place where I’ve found great friends, mentors, and memories that help make being an activist a fun job. GSAFE has the group Youth Leadership Board that does the work of creating GSA conferences, workshops, and panels and supporting the youth voice.

In particular, I focus on the “School-to-Prison Pipeline” as a concept that most kids my age don’t know about. When I think of activism and how I use it in my community, I think of this stupid pipeline.

The School-to-Prison Pipeline came to be through “zero-tolerance” policies in schools in the hopes that they would help support marginalized students and keep them from being bullied. Yet it only made it so that schools with zero-tolerance or other similar policies force kids closer to prison through the use of suspensions, expulsions, and even making them feel like they don’t belong. The types of kids in the pipeline are kids with “non-normal” identities, like a being a person of color, not being able-bodied, not identifying as the gender assigned at birth, or not being heterosexual.

When I first heard about this pipeline I didn’t understand and just thought it was another academic thing. But then it was explained to me what it really is and how it affects everyone, especially kids like me who have identities that stray from “normal.” As a queer, biracial, cisgender female who’s also still teenager, I’m a prime target for the pipeline. Going to school at La Follette High School in Madison gave me a chance to fight against the pipeline because La Follette is one of the only high schools that has a restorative justice program. The program gives teens a chance to tell their story instead of just getting suspended, expelled, and/or pushed further into the prison system. With restorative justice I was able to give myself a voice in my school.

I didn’t want to drop out; I wanted more information and more chances. Through my work with GSAFE I’ve gotten all of that and a chance to keep doing work that I’ve really started to love. I hope to continue advocating for kids who need it, and help to eventually shut down the School-to-Prison Pipeline.

GSAFE has been trying to help in all parts of the community because they all intersect with one another. In the years I have been with GSAFE, I have been able to perform intersectional-identities workshops and even go on trips across the country to learn more about the School-to-Prison Pipeline. An intersectional-identities workshop includes information about the School-to-Prison Pipeline, but also shows you that every identity you have makes up who you are.

This horrible pipeline did at least help give me the chance to be a youth with a voice. And with this voice I hope to encourage other youth to find theirs and speak for a cause they believe in.