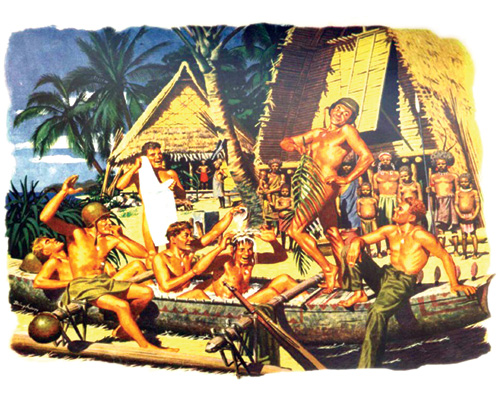 Perhaps, like me, you love old movies. I especially like the World War II flicks that show how the pressing circumstances of possible combat quickened love between soldiers and their girlfriends. I wonder, now that we have gays in the military and marriage equality, how Hollywood might rework this for the war husband. Perhaps I hope for too much.

Looking back, one can find in the historical record romances between gay men even in the period of World War II. The war experience would change America. Gay men experienced part of that change—by being taken out of local, tight social structures and put into a predominantly single-sex environment with lots of other men from diverse populations and by being faced with an immediate mortality that might make them more open to things otherwise hidden. One gay Wisconsinite would say, “You’re facing Eternity at every step.” That some used this period to learn about broader sexual experiences seemed bound to occur.

In both World War I and II, a worry was that young, arguably innocent American men were taken from their families and home communities and thus exposed to the wider world and all the presumed vices that existed therein. During the first war, the Army cooperated with police and other authorities to shut down the flourishing red-light districts where urban prostitution, presumably heterosexual, occurred near military bases. This was a culmination of the social purity, anti-vice crusades begun before war. The same concern would occur in the second war, but now could also have to include concern over homosexual vice.

After some success as a radio actor for WHA as part of “The Dramatic Hour of the Air,” Madison poet-writer Keith McCutcheon had moved to California before the war in 1939, to try his hand at breaking into Hollywood. He described the city as “Hollywood the Amazing,” which possessed “but one industry—and that is the most intriguing of any industry in the world—except war.” He noted the presence of “glamour boys and glamour girls.” Surely part of the amazement was “young men jerking sodas at every drug store—many would easily eclipse the most striking man on the screen.” To support himself, Keith undertook to write a travel column. In September 1939, the Wisconsin Rio Journal was pleased to tell its readers his column would reappear in the paper.

One of the realities of the 1939 outbreak of war in Europe was that America seriously had to think about issues of war and peace. McCutcheon, though he wrote “I despise Hitler,” was also no fan of Roosevelt’s New Deal or the rush to war. In the column for Christmas 1940, he urges readers to have “faith in this country.” The columns included a poem that gave thanks for a land “unpacked with ugly scars of war; unfilled with dead.” He hoped that the power of the pen could “swerve toward Peace desires of mankind.” It was not to be.

A peacetime draft instituted during 1940, to help America’s preparedness, resulted in millions of young men moving around the country, bound for military camps. McCutcheon, his imagination grasping this new social phenomenon, wrote a series of columns for the Rio paper describing two young men, new draftees Joe and John, caught in this upheaval. The soldiers were presumably fictional, for no mention of actual first-person reference is made as if McCutcheon was at camp. As such, he creates a romantic atmosphere for a male-bonded relationship. Joe is described as “young, handsome” and John as “so good looking.”

Of John, he writes, “His life has been suddenly changed by this new order of things—this army business. In camp he met Joe—a friend that it seemed his whole life had been destined to meet.”

McCutcheon has John say, “But I’m awful lonesome now. If I hadn’t found you well I don’t know what I’d have done.” When Joe gets ready to meet John, “He knotted his tie as meticulously as though it were his first formal.” John is inspired by the friendship to write poetry and reads it to Joe in a voice “low and soft.”  A stanza so read was:

Like a lovely lilting tune
With a subtle melody
Through the lovely afternoon
I press you close to me.

Joe compliments John on his poetry and urges him, “Write some more.” That this could be characterized as anything but a same-sex courtship in the Army would be hard for even the casual reader to miss. One line reported, “Arm in arm they walked down the camp street.”

The couple walks “a little ways from the camp, out into the quiet evening, where the sounds of day are being hushed, and dusk is gathering slowly like dark smoke along the ground.” The column continues, “And we’ll talk—you and me, and be near; and learn about each other, and discover what new things can be found. Ready?” The happy one of the pair, Joe describes a vision, “where friends are—there is a good place, a lovely place.” John, who had been lonely, and now is not, asks “But—where Joe? Where’s this place that sounds like a dream? You talk as if you’d been there before.” The hints are that Joe has been over the rainbow and perhaps is experienced in same-sex love. After commenting on the wonderful evening, John “tossed his head in a quaint little way. ‘You know, I believe I could almost love you.’”