A History of Love 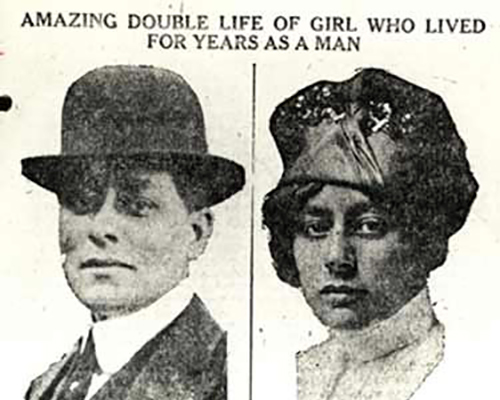 I don’t know about you, but I spent part of this spring shouting back at the television in response to Supreme Court justices, lawyers, and conservative commentators defending second-class citizenship status for lesbians and gays. What was most boneheaded, to my mind, was the presumption that so-called “gay marriage,” or same-sex marriage, is an institution that is so experimental and new, it has less than a decade of history. This just reminded me of how totally our LGBTQ history has been hidden.

Gay people have been forming loving couples and committing themselves to each other for a very long time. What is recent is that official recognition is now being belatedly provided. The sacramental discussions about marriage in my Catholic upbringing were that marriage was conducted by the two parties pledging their love, and the priest or minister was providing a blessing but not doing the work of the sacrament.

Yale scholar John Boswell in his Same Sex Unions in Premodern Europe showed that there was even an Eastern Church blessing for same-sex couples. He cites ten ancient texts in Greek, Old Church Slavonic, Italo-Greek, and Serbian Slavonic that include references to the holy, paired saints Serge and Bacchus. One such blessing included the language, “that the Lord God grant them unashamed faithfulness and sincere love.”

Some of our justices should recall that in ancient Athens—millennia ago, not just years—the first public statue erected in the city was a joint one to the lovers Harmodius and Aristogeiton. These male lovers slew a member of the tyrannical Peisistratus family, thus helping to bring Athenian democracy into being. Plato’s Symposium, his dialogue on love, discusses male lovers “who spend their whole lives together….” The Greeks knew of Thebes Sacred Band, a whole military unit made up of male paired lovers.

When Alexander the Great crossed into Asia centuries before the Common Era, he paused near Troy where the nearby tombs of Achilles and his lover Patroclus were said to be located. Seeing himself as a new Achilles, Alexander reputedly ran naked to the tomb of Achilles and laid a wreath there, while his own lover Hephaistion performed similar rituals at the tomb of Pratroclus.

Lest we think that same-sex commitment is all ancient or medieval history, though, think again. Rodger Streitmatter in his book Outlaw Marriages: The Hidden Histories of Fifteen Extraordinary Same-Sex Couples surveys de facto American unions that cover 30, 40 and even 50 years. His examples are all relatively high-profile couples like Walt Whitman and Peter Doyle, Alice B. Toklas and Gertrude Stein, Greta Garbo and Mercedes de Acosta, and Robert Rauschenberg and Jasper Johns.

A great Midwestern couple that this book features is Jane Addams and Mary Rozet Smith. Smith was a very early volunteer at Hull House in Chicago. Streitmatter notes that by 1891, the relationship was a romantic one. He records that when they traveled together, which they did frequently, they would write ahead to assure that a double bed—not two single ones—was provided. They became joint owners of a home in Maine and had intertwined finances. Addams was active in several causes, helping to found the American Civil Liberties Union and the Women’s International League of Peace and Freedom. The two women had 43 years together.

Wisconsin is not without its own examples of same-sex marriages from the past. The Wisconsin Magazine of History just ran a story by Matthew J. Prigge about “The Girl-Man of Milwaukee.” Cora Anderson had assumed a male identity as Ralphero E. Kerwineo, and she was supposedly “married” to Mamie White Kerwineo. They came to Milwaukee in 1906 and were known as a model couple and shared a domicile for eight years. Their domestic bliss ended, like many, when another woman entered the scene. “Ralph” left Mamie in 1914 and with a city-issued license, formally married before a justice of the peace Dorothy Kleinosky. Jealously between the wives would lead to exposure of this amazing story.

The Cora Anderson incident was not the first of its kind in Wisconsin. Jonathan Katz in Gay American History: Lesbians and Gay Men in the USA records an earlier item. In 1894, the Badger State Banner of Black River Falls reported that an Anna Morris, alias Frank Blunt, was sentenced to one year in the state penitentiary by Judge Gilson of Fond du Lac. Anna, arrested for stealing $175, was unmasked from her masculine clothing. At the trial, Gertrude Field, who claimed to have married Blunt in Eau Claire, fell upon Anna’s neck and wept for half an hour. Field paid for the defense attorney for her “husband.”

Another couple, with one member from Wisconsin, would establish a life partnership. The University of Wisconsin Press published Jerry Rosco’s book Glenway Wescott Personally: A Biography. Rosco tells the story of this Wisconsin farm boy born in 1901 near Kewaskum, Wisconsin. Wesott, who attended West Bend High School, recalled losing his virginity in that community in 1914 to a fifteen-year-old boy named Earl. Later, Glenway Wescott met his life partner, Monroe Wheeler, while both were at university in Chicago in 1919. Wescott was a world-renowned author, with his Apartment in Athens a book-of-the-month club selection. He would be a gay source for Alfred Kinsey’s sexuality studies, and the couple helped bring the manuscript to America for E. M. Forester’s posthumously published gay novel, Maurice. Wheeler and Wescott were still together in 1987 when Wescott died at 86.

Another extraordinary couple was Robert Neal and Edgar Hellum of Mineral Point. Will Fellows’ book A Passion to Preserve: Gay Men as Keepers of Culture documents their partnership, which began in the mid-1930s and continued for decades. They help saved Cornish culture in this early Wisconsin town and boosted historic preservation efforts statewide.

Keith McCutcheon and Joe Koberstein, a Madison couple who also met in the 1930s, began a lively social circle on Jenifer Street that would last into the 1960s. Keith was a published poet whose verses from the 1920s began his exploration of same-sex love.

Following Stonewall, gay activism brought a new dimension to the struggles for same-sex love here in Wisconsin. In 1971, Donna Burkett and Manonia Evan applied for a marriage license at the Milwaukee County clerk’s office. The clerk, Thomas Zablocki, denied the application, and they filed a lawsuit but subsequently withdrew it. On Christmas Day, Father Joe Flederhausen of the Holy Eastern Orthodox Church married them. GPU News of Milwaukee reported two years later in 1973 another gay wedding between James Riski and Nick Gagalaino in Green Bay conducted by Father Bob, a Catholic priest, at a private residence. The happy couple wore matching outfits of gold shirts and white slacks, and each had a double rose corsage.

More recently, the Republican-controlled legislature in two successive sessions passed a proposed Wisconsin constitutional amendment to ban gay marriage in the state. It was part of a strategy to prevent the re-election of Democratic Governor James Doyle in 2006. Fair Wisconsin, an alliance of earlier gay-rights organizations, was formed to wage a vigorous fight against the amendment. Unfortunately, the amendment won with 52 percent of the vote. But Doyle was re-elected, and Republicans, because of the turnout of the student vote against the amendment, lost one house of the legislature.

In 2009, Gov. Doyle, working with Fair Wisconsin, proposed state recognition of domestic partnerships and health benefits for same-sex couples employed by the state and university. With both houses of the legislature now back in Democratic hands, the measure had good chances of success. The effort was guided by out gay State Rep. Mark Pocan as co-chair of the Joint Finance Committee. Pocan had previously wed his partner, Phil, in Canada. With enactment of the domestic-partnership law, some 2,000 couples all across Wisconsin have sought to gain even this “skim milk” level of legal recognition for their loving commitments.

Gay love stories, gay couples supporting each other, and even gay marriages are not new. I cited the many published sources above to show that gay marriage without the official sanction has existed for a long time, and that such knowledge is in the public realm, if not within the heads of certain justices. What is new is just the collapse of the universal bigotry denying legal recognition to same-sex marriage. We will see how far this collapse goes and how much further it has to go when the Supreme Court makes it rulings in June. I say both history and time are on our side.