A New Sport, A New Culture, A New Community, A New Life 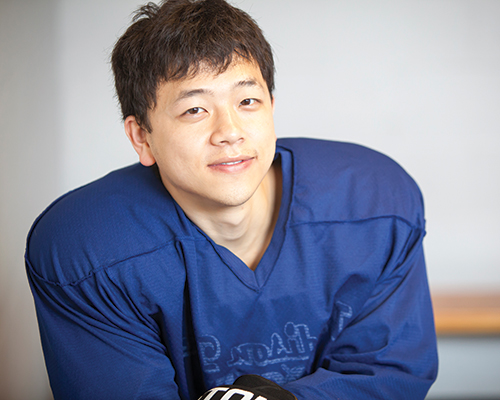 In 1996 my family came to the United States as a result of the Vietnam/Secret War, in search of a better life for us. We came straight from the refugee camps into this industrialized nation. I had never seen people of different skin color, nor did I know what music and television were or any other kind of technology. I didn’t even have clothes until I was three, and here I was in a different part of the world where people were giving us free food, clothes and a home, and all of a sudden I had cousins and relatives who knew me. But it wasn’t very long until I started seeing how different life was here; I was told to go hide every time a white man appeared because it was dangerous and soon after I was taken into a place called school where I was left with random people who didn’t speak my language.

Instantly the other kids knew I was different because I couldn’t speak English, and for some other reasons, just didn’t like me; I would later make friends by giving them something of my own or stealing for them. My insecurities would grow over the years as I realized what being poor meant. On my first Christmas, a year later, I was 6 and I watched as all my cousins opened boxes, I didn’t know what they were doing but all the boys had toy guns and action figures and the girls had ponies and things I didn’t even know existed, I was so excited; I had never had a toy before, but couldn’t find my present. I went to my mom and said “Mom, what about me?” but she didn’t have an answer, I was devastated at the time and went into a rage, but later promised myself that I would never ask my parents for anything no matter how much I wanted, unless I felt that we were in a financial situation where it was OK, I didn’t want my parents to suffer; I’ve stayed true to that statement.

Skip ahead three years—on my first day of fourth grade my parents moved me to a new school for the fourth time, and I would be taking the bus. As we neared John Marshall, the bus stopped and all the kids started running out, and as I took my first step out of the bus I looked up to where a tall fifth-grader walked up to a fourth-grade kid my size and punched him in the face. All the other kids were shouting out “fightfightfight,” “girl” and “gay.” I was still struggling with some English at the time and was too shy to ask, but I figured “gay” was just another bad word that the other kids were using. I didn’t stop to think about how much this word would later affect my life.

In the fifth grade some of the boys started calling me “gay” and “girl” because I was “too nice.” I had recently started hanging out with some of the school girls and “girly boys” and stopped playing dodgeball. I didn’t understand why I was getting called these things because I was just doing what I liked my insecurities kept growing to the point where by the end of the year I would contemplate all the terrible things I could do to these other kids who would call me gay or a girl. I thought to myself, “I had never done anything to them, so why should they be allowed to do this to me?” Eventually my cousins also started calling me girl and gay, which resulted in me hating everyone. I was confused and I didn’t like how other people dealt with my feelings; in my family at the time, it was weird if the boys talked about their feelings to their parents, so I never went to them. I already knew what the word gay meant, but it wasn’t until I was in sixth grade that I finally understood the meaning of the word Gay.

I was on the bus headed to class and was just thinking about that word when I realized that I was gay; it was the word that was going to define my life. When I got home I went to sleep at 5:00, and for the first time I turned toward God, I didn’t know how to pray, but I laid on my bed and clenched my hands together and said “God, if you exist, please make me normal, and if you don’t want to do that, then please kill me in my sleep so that at least it won’t hurt.” It didn’t work, but I thought it was because I wasn’t praying hard enough. So I prayed harder and harder, and continued the process throughout the course of two or three years. I also tried changing my personality to be how a normal boy would act, tried dating a girl, and sometimes cursed this world, but eventually came to the conclusion that nothing was going to work and that I would have to hurt my parents one day. One day I came to the conclusion that maybe if I distanced myself from the people I loved that one day if I told them I was gay, and if they disowned me, it wouldn’t hurt them as much; that thought never left my head. So after I graduated from high school, I ran away from home. It didn’t matter to me where I was headed, or how I got there. I was finding every reason I possible to get away from my life and everyone in it, and so I chose a destination.

Unfortunately due to my naïveté I ended up in Fargo, and two years of mental isolation. Fortunately I was blessed enough to join the theater department up there where I met Stephanie Olfert, Alex Stokes, and Kelsey Svare who are just three of the best people you’ll ever meet in this world. I don’t know how I would have made it through those two years without them; I didn’t have to worry about being accepted when I was with them.

Eventually I chose to return to Wisconsin, and being hesitant to return home, I transferred over to MATC in fall of 2011 and later UW-Madison. That very same year I auditioned for The Talking Out of School Plays directed by Monty Marsh-McGlone. I was cast for a few student roles where I also worked with a friend, Paula, who later invited me to go see an LGBT speaker at her church. I instantly smiled as I saw Patrick Farabaugh walk up at the Prairie Unitarian Universalist Church. He talked about his life story and how he came to publish Our Lives magazine and play hockey. I have never met someone so inspiring in my life, and had to talk to him. As I walked up to Patrick after his speech, another lady came up and started up a conversation with me; she wanted my number for her daughter. I didn’t want to say no, and was too hesitant to say I was gay to her, so the conversation dragged on for a bit and I was only able to say a couple words to Patrick.

After that day I started reading Our Lives magazine. I would look at the hockey information, and later that summer went to the pride parade in Madison and saw the hockey league there. I really wanted to meet people, and I didn’t have a lot of friends in Madison or in general, and I was still struggling to find a community that might accept me, and so I shot the Madison Gay Hockey Association an email and got started.

I walked into my first hockey clinic at Hartmeyer Ice Arena in shorts and a jacket, and boy was it cold. There were a lot of people at the rink and I was nervous about how this was actually going to go, but one of the new players, Jasmine Donahoo, walked in and introduced herself to me and assured me that I wasn’t the only one. And just seconds after that, a taller guy, Matthew Basler, walked in, turned toward us and smiled. Instantly I knew he was gay, and I knew we were going to be good friends. Unfortunately when the teams got picked all the rookies were separated into different teams. I would be thrown in the Black Team, where I didn’t recognize anyone’s name on the list except Brandon Rounds.

On the first day when the Dark Knights (the name of the Black Team) met up, I was thrown into a moment of consternation as I walked in. None of the guys looked gay, and I was sure they were all straight. And Brandon Rounds was not going to make it, which didn’t help my situation. I really thought this was going to be one of those “show no mercy to the gay newbies” kind of days, except we only had one noob. It was quite unnerving for me to be out in front of a lot of straight people, especially guys. But when our team captain, Joe Walsh, started the passing drills and said “everyone find a partner,” Richard Avremenko came straight up to me and said “You’re going to be my partner,” I thought I had died and gone to hell, but now I would never change that moment. I now know that I was blessed to be thrown into this team. Rick, Jen, Brandon, Anna, Joe, Katie, and Wally and the rest of the team, you guys are the best and this season was just filled with life for me. Because of you guys and everyone in MGHA I’ve really grown to love the league and the sport; I have never been this close to anyone, much less a community.

Being in the league has really shown me that allies do exist and that people do care, and now I can say that I am gay and proud without being scared. I have made friends who I can call family without worrying about what I will be judged as. Being with MGHA, I have come to realize that society can only hurt me if I let it. MGHA is more than just a league and a community; it’s family, love, and support.