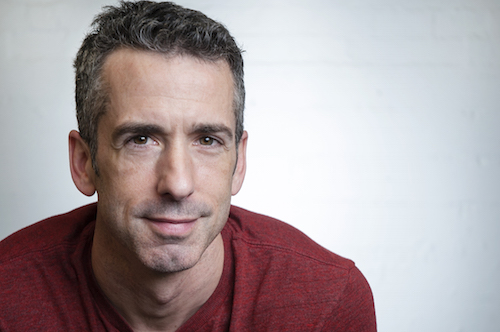 Never one to shy away from controversy, Dan Savage is one of America’s most honest sex-advice columnists and queer pundits. Savage has been writing his Savage Love advice column since 1991 when he lived in Madison. Since then he has written books, launched the HUMP! touring festival celebrating queer amateur filmmakers, and started the Savage Lovecast in 2006 when podcasts were barely a thing.

Savage is bringing his advice column and podcast to life with “Savage Love Live” at the Barrymore Theater on Saturday, March 24 at 8:00 p.m. In advance of his visit, Our Lives spoke with Dan about politics, progress, and Plazaburgers.

What are you most looking forward to in your visit to Madison?

Going to Himal Chuli for lunch. If I can’t get to Himal Chuli, I’m headed to the Plaza for a Plazaburger. Hopefully I can have both.

State Street has changed a lot. I wonder what it’s like for you to visit, to see how the city changes and what things have already changed that you miss.

Well, I’m a fan of cities and I’m an urbanist. Cities grow and change, so when I come back to a place there may be things that I miss. But a city that stagnates is dying. I will, however, never get over the fire that took out Hotel Washington and Rodney’s, the barber shop and the jazz club for straight people in the back. That fire was a real tragedy.

Madison does still bring in great events and your Savage Love Live will be one of them this weekend. This is going to be an audience participation show, right?

Yeah, it’s the column and the podcast live and on stage. And if anyone has ever thought, “Wow, Dan Savage has all the answers! He knows everything!” come to a live show. It looks like I have all the answers in the advice column because I don’t pick questions I don’t have answers for. But at the live shows I often get questions that stump me and then we work out the answer together, me and the audience, just like I would work out an answer with guest experts when I’m stumped by a letter I get for the podcast.

It seems like writing a column or recording a podcast by yourself or with an expert might feel a little safer than opening it up to the Wild Wild West of a live audience.

It is! And sure, sometimes people come just to argue with me or because they disagree with me. But I enjoy that. I welcome that. I’m Irish Catholic. It wasn’t dinner unless there was a good argument going.

So what can first-timers expect at the show?

It’s really audience driven. It’s Q&A and we take questions on cards and you can ask questions anonymously if you don’t want to stand up in front of everybody and raise your hand and ask about the sores on your genitals or anything. But we also do take questions live if people want to stand up and ask that question. It’s just a rolling, rollicking conversation. It’s often a lot of current events and political questions at a live show, but mostly it’s about sex and relationships and crazy kinks, just like the column.

Speaking of current events, have you been watching the school walkouts and all the youth activism that’s been happening around gun violence? Are you inspired by these waves of youth action?

With the burst of activism and rage that came out of Florida inspired by the students and survivors of Parkland, but then picked up by other young people in schools all over the country, these are people who aren’t paralyzed by that learned helplessness.

When Trump and Pence were elected there was a lot of ink spilled over how the sky was falling and the queer community was under threat. From your vantage point as an activist in the queer community, has the sky fallen? Or are we much more resilient than we were during the Reagan and Bush Administrations?

I’m optimistic about the immune system response of the country to Trump. I am pessimistic about the hundred million ways in which Trump and all of his cronies are eroding our democracy, our environment, our political culture, freedom of the press…. The midterms are coming, and hopefully ‘here comes the cavalry.’ But even when we see progress in the midterms, it’s still until January of 2019 until new people in Congress are sworn into office and there can be a check on the Trump Administration.

Whenever I feel despair I look to Indivisible, to the women’s marches, to the student activists and that resistance. But it would be dishonest of me if I said I didn’t at some times feel despair.

That’s true. Madison is an activist city. But we also don’t all agree amongst each other. I have no doubt that some people reading this interview have disagreed with you and some of the controversial statements you’ve made in the past. You’ve been brutally honest. How has that been a form of activism for you?

I’ve been running my mouth in public professionally for two and a half decades. Anyone who runs their mouth professionally is occasionally going to run themselves into a ditch, myself included. One of the things that’s odd about writing in the era of the internet–as opposed to my work just being in print when I first started – is that it’s like you’re not allowed to learn. A column you wrote 20 years ago that you wouldn’t write today because you’ve learned and grown as a person and a writer and a thinker – gets brought up and passed around as if you wrote it 20 minutes ago.

I’ve always said my columns are a conversation I’m having with my readers and I learn as often as I educate. If your activism doesn’t allow for people to take in your criticism and comments and learn, or if it doesn’t help people come around to your side and you won’t embrace that person and their growth, then your activism is assholery disguised as activism. If you want people to come around to your side, when they do you should embrace them.

Stacy Harbaugh is a public relations and social media consultant at Unstuck Communications. She has worked for Dane County nonprofits since she moved to Wisconsin in 2004.