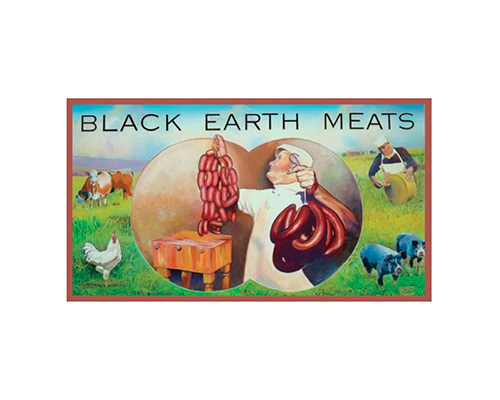 If you ask people what they are most thankful for, their families and their health are often at the top of the list. I certainly feel that way. And as a chef, I feel that high quality food plays a large role in both of these things. So when I read that Black Earth Meats (BEM) was closing its shop, my heart just sank.

In Wisconsin, BEM was the only small organic meat processing facility. Period. The owner, Bartlett Durand, shouted from the mountaintops his belief that consumers deserve high quality, grass fed, organic meat that is treated humanely and with respect all the way through the process of going from the pasture to the slaughter house.

So why shut BEM down? The butcher shop that Durand took over in 2008 has been in Black Earth for 60 years. In a separate news story, Village Board President Pat Troge asserted that BEM had grown too large for the village and was putting an undue strain on village resources (water treatment facilities, etc). Neighbors have also been cited as complaining about the increase in animal residue, smells from the animal waste products, as well as excessive noise and a few other complaints referred to as “neighborhood trouble.”

So in December of 2013, the Board asked BEM to move outside of the village, giving them 120 days to come up with a viable plan. When Durand came back with four possible plans and asked for an extension of time, the Board declined and told Durand that they would prefer to move toward litigation. This decision caused Durand to lose his bank note for the store, which closed this past September.

Despite the fact that the BEM store in Black Earth is now closed, their retail butcher shop, The Conscious Carnivore, remains open—which is great if you live in Madison but not so helpful if you live outside of the city. In the fullness of time, as a part of a four-step program that Durand has in place, we will hopefully see more Conscious Carnivore stores opening in other communities using crowd funding and other creative funding sources, as well as good old-fashioned investors. Stay tuned to the Black Earth Meats’ website (blackearthmeats.com) over the next several months for the unveiling of Durand’s plan and how you could become involved in what Durand called “Black Earth Meats 2.0.” It’s going to be very exciting, and the community will certainly have a part to play if they choose to (think Kickstarter and other innovative fundraising adventures).

In the meantime, rest assured that BEM will continue to offer their amazing meat CSA, which can always be delivered (again, check their website for details).

Is there a lesson here? I believe so. The take away is that we, as heads of families, need to take a stand and shoulder a more active role in the pursuit of healthy, sustainable food sources. Most Americans have become too complacent in what they will accept in their food supply chains. Cheap food is just that. Why are we willing to spend $130 on a pair of shoes but not $18 a pound for organic beef? With weekly news releases about food contamination and recalls, why aren’t more people in an uproar? When so many other countries refuse to accept GMOs in their food chains, why is the US just fine and dandy with it?

Durand’s fire to keep BEM alive has inspired a lot of us to keep fighting the good fight, to demand food suppliers that are not only dependable but also ethical and worth supporting. His fight has left us with an opportunity to come together and grow as a community, to leave a legacy of better health for ourselves and for our families. I am certainly all in. I hope you are too.

Jeanne Benink is a Madison chef and the sole owner of Simply Served Personal Chef Service. Her friends often call her the soup guru, and she truly does have passion for exploring soups and stews from all over the world. You can find her online at simplyservedpersonalchef.com