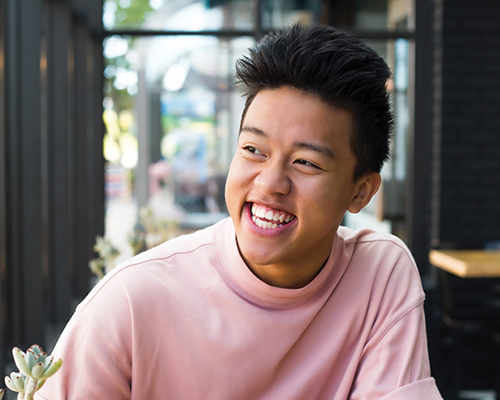 My name is Travis, and I am a senior at Appleton West High School and Renaissance School for the Arts. I was the disappointment that sullied my family name.

It was an hour into the argument with my mom, and all I wanted was for it to end. I did not care how; I just wanted it to end. At the age of 13, I was kicked out—out of the place I called home, out of the only place that made me feel safe and secure.

Asian Americans come from many different countries. We have diverse languages, ethnicities, and cultures. While this may mean that our backgrounds differ, lesbian, gay, bisexual, transgender, and queer Asian Americans still share similar challenges and experiences throughout their coming out process.

We as LGBTQ youth were told that it gets better, but as an Asian American, coming out can get very complicated. I grew up Catholic. I was told to hide that side of me and to deny.

So I did; I believed that it was not right to feel the way I did. I believed only boys and girls were to be together. I was young, I did not know better, I thought liking other men was not a real thing. I was told that it was wrong.

I was afraid of being bullied more than I already had been. Growing up, I was a small child. I didn’t look like the other kids, and being Asian didn’t help. Sooner or later I started hating myself even more because I was Asian and gay. I thought it couldn’t get any worse, and then my stutter got in the way of my life and became another target for bullying. I became a reserved kid.

When I finally accepted myself for being me, for being a gay Asian (a Gaysian!), I was the happiest I could ever imagine. For once in my life, I was comfortable in my own skin. That encouraged me to do things I had never imagined before for myself.

I now work my hardest to be the best version of me. I volunteer around 300–400 hours a year helping with my school. I ring bells for the Salvation Army. I help tutor kids and teach them about diversity and being different. I’m also part of 14 different school clubs and president of four of them. I’m in an acting troupe called Zero Tolerance (a peer-to-peer drama group that educates around ending dating violence, bullying, and racism). I am a student athlete and a team manager. I am a LGBT youth advocate and a representative for Outstanding Youth in Wisconsin. I’m so proud of all of that work.

Making that change lead to me being given the Youth of the Year award by the Boys and Girls Club of Fox Valley. I now am able to tell my story of overcoming the greatest obstacle in life, which is accepting yourself and to not let yourself be your own worst critic. My advisor and friend, Kristin Griswold of the BGCFV, made sure that I was always the best version of me. She saw a spark in me that I could not see because I was always putting myself down. She gets serious credit for who I am today.

This is who I was meant to be: an athlete, a theater junkie, a techie, a musician, an overly positive person, a happy go-getter, and an out and proud gay person. If I have learned one thing so far in my amazing life, it’s this (and I challenge you to do the same):

My name is Travis Thor, and I am a senior at Appleton West High School and Renaissance School for the Arts. I am the kid with the voice that created an echo.