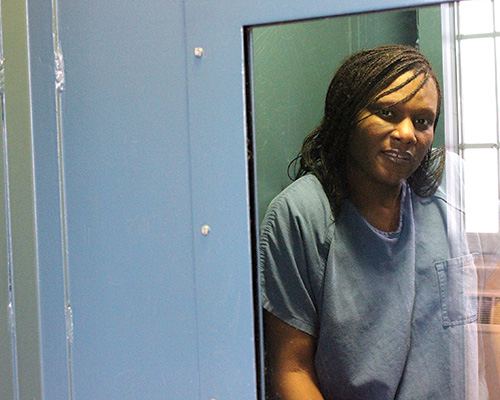 Bryna Godar’s recent article in the Capital Times, “They Wanted to Keep this Quiet,” about Lisa Mitchell, a Black trans woman suing Dane County Jail for mistreatment, thoroughly depicts Lisa’s activism and life struggles. Lisa’s story touches on issues that unfortunately are too common for Black transgender women across the United States.

One in two Black trans women are incarcerated or have been incarcerated in their lifetime. Most have experienced sexual violence, poverty, unemployment, homelessness, and sometimes survival sex work.  Lisa is no exception.

The violence that Lisa has experienced should be seen as both a racial justice issue and an LGBTQ issue. This includes being criminalized for surviving poverty, being forced into gender segregated jails and homeless shelters, experiencing sexual assault, and being denied medically necessary care while incarcerated at various jails and prisons in Wisconsin, including currently at the Dane County jail.

Lisa has filed a federal case against Medicaid after being denied transition care from Badgercare (WI Medicaid). She won her appeal, but wants to make sure trans exclusions are removed from the Badgercare and Medicaid policies as are currently written.

When a person experiences multiple forms of oppression such as Lisa, it has a dramatic impact on their health. This is only further exacerbated when they go to find support or seek medical or mental health care, and are often met with further barriers. Systems of care often provide inadequate treatment or refuse to care for transgender people of color. In fact, over half of transgender people reported needing to educate their providers on how to treat them, as found in the National Transgender Discrimination Survey.

Work in Our Community

The Wisconsin Transgender Health Coalition recognizes the many factors that impact a person’s ability to access health, and is working on multiple levels to create an environment and conditions in Wisconsin that provide equitable access to health care for transgender and gender non-conforming people. The coalition understands the need for, and is working to ensure that, transgender people have: access to resources that help navigate systems of care, protection from local and statewide nondiscrimination policies that explicitly state gender identity as a protected category, and care from providers who have received training and education on how to treat transgender people with respect and quality service. The coalition also sees racial justice as a necessary piece of accessing full health for transgender people.

The Dane County Trans Health Group is a partner of the WI Trans Health Coalition and is working for full access to trans health care and for health care to be a human right. Starting with Dane County employees, this group is advocating to remove exclusionary policies for transgender people’s access to medically necessary care. The strategy of starting with one of the largest group of employees in the county will ideally encourage local health care providers to develop plans that are inclusive of transgender needs. People who are incarcerated have the same needs and rights. Lisa and anyone else who is in jail or prison needs to be able to access full transition care including mental health, hormone replacement therapy, various types of surgery and all other care that will support their transition needs.

Locally and nationally the Black Lives Matter movement has been clear to say that All Black Lives Matter. This includes a focus on Black immigrants, Black people with disabilities, and Black queer and trans people. When Young Gifted and Black Coalition fights to “Free the 350” to eliminate racial disparities in the Dane County jail, they are intentionally including a focus on people like Lisa.

Similarly, the national and local LGBTQ movement needs to centralize stories like Lisa’s. With the passage of national marriage equality, there is an opening for racial, economic and trans justice issues to take center stage. When people most impacted such as Lisa Mitchell get free, we all will be free.