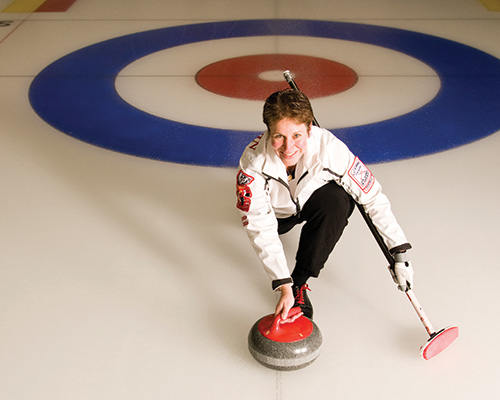 Not once, in everything I’ve ever done, have I ever felt the same wonder and humanity as when I’m playing the game of curling. — from Men with Brooms

Curling is a team sport, played on a sheet of ice with four players that slide and sweep rocks to a target area; the team closer to the center of the target scores the points. If you know the first five words in that sentence, then you already know more than I did when I started curling. Growing up in Minnesota I loved winters, but curling meant nothing to me. I am surprised at how curling has enriched my life, molding me into a fuller person and a stronger firefighter.

I got involved with curling as a kind of joke, to appease my college friend’s repeated requests to try it. Her dad ran the college curling program in Mankato and she was my supervisor at Hardees, so it was hard to dodge the requests. I played half-heartedly for two years as a front-end player (throw two stones then sweep all the rest) and my interest was waning when I saw a national magazine on curling that piqued my curiosity. On the cover were four junior girls from Madison, Wisconsin, and they had just won Junior Curling Nationals and were headed to Junior World Curling Championships. I had no idea that there were different tiers in curling. Until that point, I was living in a small world, curling once a week in a tiny club and didn’t know that there were others doing this in bigger places for bigger prizes. Since I was headed to Madison to further my career goals in firefighting, I thought I’d go meet these girls and continue to give the sport a chance.

Once in Madison, I joined a team that needed a vice player, or the person that throws third in the line-up just before the skip throws (last rock thrower). What that also means is that you get a chance to participate in the decision making part of the game, have more difficult shots to execute, and are the team communicator, uniting the front-end (first two players) with the back-end (last two players). Having this extra involvement started changing my view on curling, and I was getting more excited about it. On top of that, I was curling with the most decorated woman in the sport of curling at that point, and the environment was much more competitive. National- and World Champion-caliber players were walking around the club on an everyday basis, and I was thinking this was getting pretty cool.

My “aha” moment came in my fourth year of curling when I was encouraged to skip my very own team (be the main strategist and last rock thrower). This changed everything. I was empowered by the responsibility of that position, and took it as a sacred oath to make sure that each one of my team’s gracefully delivered rocks made it to the perfect position by the decisions I made (the sweep and line calls).

Once I started skipping I never looked back and curling took over as my main sport, far surpassing my other interests in softball, volleyball and biking. I now have curled more years than I haven’t (25 years), and have found the curling scene to be the place where I’ve found the best quality relationships, have the best focus, relaxation, exhilaration, and some disappointment. It’s everything and nothing. I’ve heard it said that you can curl 100 years and still learn something new about the sport.

A great quote I’ve heard came from the Canadian romantic comedy, Men with Brooms. “No, it’s not just a rock. It’s 42 pounds of polished granite, with a beveled underbelly and a handle a human being can hold. Not once, in everything I’ve ever done, have I ever felt the same wonder and humanity as when I’m playing the game of curling.” – Paul Gross

I have become a stronger firefighter since I’ve been curling. Curling and firefighting are pretty much the same to me. Curling is a safe place where practicing real life skills come in handy before needing it in a life-death emergency situation. Both use the risk versus reward thinking to make critical decisions. Both need to be situationally aware and form strategies that can bend given the changing variables in the environment. Both have a high dependence on clear communication; orders must be given in a very clear and concise way. Both teams use four people; each team member contributes their special skill set to help solve any problem. Both train to “win.”

In competitive curling my team’s best finish was eighth place at the 2005 Olympic Curling Trials. In firefighting, my best finish is still to come, but I will continue to work hard at decision making, communicating, and occasionally yelling and sweeping hard.

Madison Curling Club boasts over 500 members, has six sheets of ice, and offers leagues three times a day Sunday through Friday. Our youngest league member is 10, and our oldest member is 86. Curling is multi-generational, multi-ethnic, and welcomes all walks of faith and sexually identified persons. We are home for people on many National teams, including the National Wheelchair Team, High Performance team, Junior and Senior National teams, and Men and Women National and Club teams. We boast members from the 2002 World Curling Champion team and have sent members to the last five Olympics (1998–2014).

Find us at madisoncurlingclub.com to try a pick-up game, schedule a company work party, or try your hand in a league.