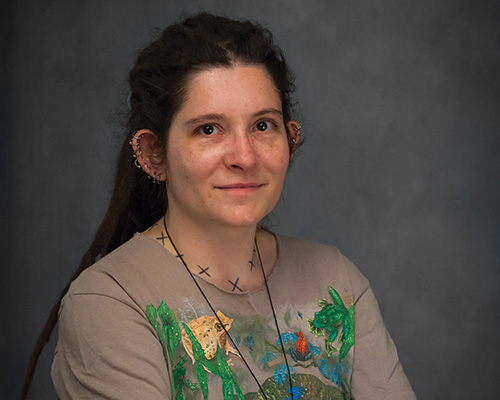 I am Vered Meltzer, Alderperson of District 2 in Appleton, Wisconsin. I’m also a writer, painter, and avid gardener. I’ve been living here since the fall of 2000 when I started at Lawrence University. Prior to that I lived in Stevens Point. Before that I spent a number of years growing up in the People’s Republic of China. I’ve traveled around a lot and never felt particularly attached or attracted to any specific place until I saw the Fox River. When I graduated from college in 2004, I decided to stay in Appleton and focus on creative projects rather than continuing my academic pursuits.

I decided to run for City Council because I genuinely love Appleton, and as a very outgoing, people-oriented person, I feel that I have the ability to do a great job. I’m not interested in politics. I’m interested in people and cities and creativity and sustainability and happiness. Local government has an immediate, direct impact on the daily lives of city dwellers. And those who are in the public eye become a force of normalcy. I think the best way to strive for a world of tolerance, diversity, and happiness is to show people what it looks like through the example of my own life and adventures.

In the context of my gender identity and expression, I feel that the challenges I did not face were very significant. Most challenges I’ve experienced have nothing to do with gender or identity—I’ve struggled with poverty and depression and physical health issues, among other things. I was bullied a lot in China for being a “white-skinned, imperialist devil.” Going to China at such a young age was a very formative experience in many different ways.

One of my favorite things about growing up in China is the gender- neutral language. The pronouns for “he,” “she,” and “it” are all “ta,” all pronounced with the same tone. This set of homophones left a very deep impression on my brain, informing my worldview and shaping my understanding of social constructs and the fluidity of reality.

I was seven years old when I arrived in China, and my mother had given me a very short haircut. One of the first Chinese phrases I learned to understand was the question posed to my parents: “Is that your son or your daughter?” My parents did not enforce gender conformity and encouraged me to figure myself out on my own terms. My parents and my sister have always been loving and supportive. I was homeschooled quite a lot, and during the two years I spent at Stevens Point Area Senior High, I was such a socially awkward freak on so many different levels that no one knew what to think of me, and I enjoyed keeping it that way. So my gender identity and expression were always organic and taken for granted. My parents always encouraged self-discovery, and my peers avoided me rather than making me defend myself. I’d say I was very lucky, but I believe in coincidence and serendipity rather than luck.

When I arrived at Lawrence University, I had the joy of all joys to find the Yuai Community, a gender-neutral fraternity of sorts that has existed on campus for many years now. In this campus organization focused on tolerance and diversity, I made deep, meaningful friendships. I helped create and maintain a judgment-free atmosphere in which gender identity was incidental, and we all supported each others’ self-expression with a spiritual passion.

As a result, thinking of myself as representative of any particular group or category of people gives me a bit of cognitive dissonance. I am a cultivated tangle of contradiction and paradox. I never expected to make history or be taken seriously. As a writer, raising questions is satisfying enough. I never aspired to do more. So it is difficult to relate to my personal place in history. One of my biggest challenges has been discovering that I really am making a difference in real time rather than through my writing. But where do I go from here?

Another big challenge I will always face is the fact that I will always be a boy in a girl’s body. I have physical conditions that have led me to rule out hormone treatment and surgery as viable options. Over the years I have developed various methods and mythologies in order to accept and love my body. It’s a type of self-discipline somewhat like yoga, and I still often lapse into depression and feel overcome by physical dissonance.