Committed to the Long Haul 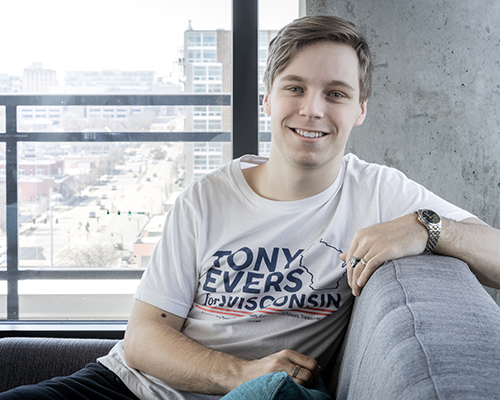 My coming out story is nothing special, nothing to make a headline in a newspaper or a magazine. I came out when I was 16. It was a cool summer evening, and my family was just about to sit down to a lovely dinner. As my mom and dad settled in for the meal, I just blurted out “I’M GAY!”

My parents both looked up, more than a little stunned. They asked me if I was sure, I nodded, and we moved on. Over the next several weeks and months tensions were high. Both of my parents told me they weren’t really sure how to best provide support for me.

I am fortunate to have numerous LGBTQ+ mentors, family members, and friends who have all helped guide me to where I am today. First, my aunts, active in politics and government, have been strong, powerful figures who provided a view that the world can and should be a place where LGBTQ+ people can grow and thrive. My eighth grade social studies teacher, Abby Swetz, greatly shaped my views on social justice and my identity. We studied the Stonewall Riots, the labor movement, and the women’s Suffrage Movement. Abby sparked my activism.

Finally, Leanne Cordisco, owner of the Chocolaterian Café, has been an extremely important mentor. While I was still deeply in the closet and terrified about coming out, especially at work, Leanne asked me—on my very first day at my very first job—if the gentleman who walked in behind me was my partner. I quickly answered no. She said, “Aw darn! You two would have been cute together!” It was then that I knew the Chocolaterian Café would be home, a safe place for me to grow and learn. Leanne provided support not only through coming out but also through my schooling and my political career, all of which has been critical.

I was in 7th grade in 2011, the year of the Act 10 protests. On a cold February day, my classmates and I walked out of school and marched to the capital. During these protests there was not a day that I was not down at the capital. I stood in solidarity with 100,000 people, singing songs as we welcomed the “Fabulous 14” home. I knew then that the elimination of collective bargaining rights had hurt my friends, family, and thousands of others.

My fight against the Walker Administration continued into 8th grade with the recall election. At the end of every school year, O’Keeffe Middle School takes their 8th grade class on a walk around the lake. That year we carried banners calling for Governor Walker’s recall. The results of the election were unfortunate, but my spirit was not dampened.

In 2016, I started my freshman year at Edgewood College. At the beginning, a friend of mine from high school who was also attending invited me to a College Democrats meeting. I was elected to be the Vice-Chair of the club. In this position I helped grow the group, which also involved teaming up with For Our Future PAC. I worked for them for several months, canvassing in support of Hillary Clinton. Again, similar to 2012 and 2014, the 2016 election night was very difficult. The next few days felt like a bad dream. The students in my classes who supported the President Elect scared me. I didn’t know what to do.

That loss motivated me to apply to Rep. Chris Taylor’s office as an intern. It was my first foray into working directly in government, and a defining experience. It has reinforced my beliefs and interest in politics and policy. Rep. Taylor taught me about policy, how to debate it, write it, and turn it into reality. She was and continues to be a mentor and a beacon of progressive politics.

Most recently, I worked on Tony Evers’ campaign for governor for a year. I traveled all across the state. It was a year of grueling, at times mind-numbing, exciting, and very rewarding work. It paid off during the very early morning hours of November 8, 2018 when Evers beat Scott Walker to become the new governor. My tears of joy from an eight-year fight flowed freely as my friends and I rejoiced.

Currently I serve as an intern in Gov. Tony Evers’ office. I am a junior at Edgewood College, studying Political Science and Art during the week, and managing the Chocolaterian Café on the weekends.

There are discouraging moments in politics; when Governor Walker passed Act 10, when Trump locked children in cages, and so on. However, while these events are discouraging they are also my motivators, just like my mentors. It is my hope that, one day, I will be able to influence legislation to make the world a more equitable place for everyone. I want to become an advocate for the LGBTQ+ community, and other marginalized populations, as well as provide to the next generation of leaders the same kind of mentorship that has been modeled to me.