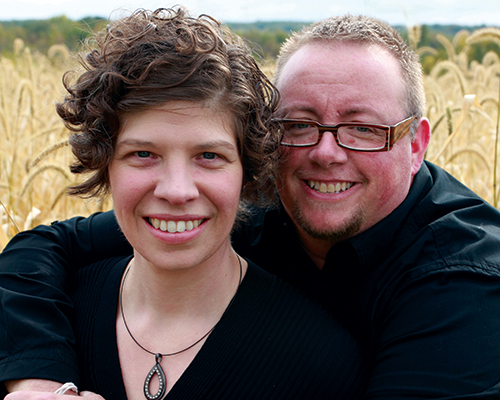 We met at Bible study in the fall of 1990. Looking back, it was love at first sight. We lived on opposite ends of campus: I was in food service, scanning dining cards. I wrote Tara notes, and as she made her way through the breakfast line, I handed them to her. I walked the long way to class just to see her in the morning.

I guess we have a typical love story: You meet, find ways to spend lots of time with one another, create a long-lasting friendship, commit to each other “forever,” and journey on. We were oblivious to the fact that we were falling in love. Neither one of us had been in a same-sex relationship before (when we first met, I identified as female and went by my birth name). We were also Catholic, which complicated our coming-out process. Our relationship grew into a very close friendship, and we felt like family to each other. We spent loads of time together, staying up late talking, going for walks and on adventures around campus, and so much more. Leaving each other over breaks seemed unbearable.

In the summer of 1991, we ventured off to work at a camp. This allowed time together without the pressure of school. There, that feeling of friendship turned into love. Or at least, that is what we came to realize. Despite having our own space at camp, we could not resist sharing every night together. And then one summer night I kissed her. I kissed her forehead, her nose, and then her lips. When she looked startled, my quick response was “The nuns do it.” What I meant was, the nuns I stayed with kissed each other as a greeting ritual. The relationship changed, and our journey out began. There were definite struggles, the idea of being lesbians, and how could we be lesbians and be Catholic? The love that we had for each other was so beautiful, and we couldn’t be convinced otherwise. Eventually we stopped being Catholic, leaving the church because of its policy on LGBT+ people.

The process of coming out is never easy. I struggled with coming out for a while. I had always felt different; empty and incongruent. I longed to fill the hole that feeling different left in my heart. Once I accepted being a lesbian, I embraced this new identity. Tara hesitated, afraid of what people might say or think. She grew up in a small town where feeling different penetrated deep. We stayed closeted for a while. Both of us worked in healthcare, where being out could be risky. Upon entering graduate school, I decided my identity deserved acknowledgment. I was out and proud. Eventually, more and more of the friendships surrounding us reflected this sentiment.

Sometimes you think your sexual orientation is obvious, but in reality people are usually oblivious. We were together most of the time. We bought a house and a dog, and assumed people knew. Then they would say, “How great you two girls found each other so you don’t have to live alone.” It took us many years to tell Tara’s family. In fact, it took a new person in the family to ask the obvious: “How long have you and Tara been together?” Tara’s sister-in-law responded, “They are an old married couple.” It was true; we’d had a little commitment ceremony, just the two of us, many years prior to that day.

I grew up always feeling different. The reflection in the mirror never matched the internal view I had of myself. For a while, falling in love seemed to take that feeling away. However, feelings of incongruence returned. At the time, I worked at a university as a LGBT director. I attended a national conference and went to a Gender Queer Caucus. I had never heard of the term “gender queer” before. In this room there were 60-80 people of all ages. There were many different identities present. Some people shared that they were transgender and talked of wanting to transition. This was the first realization that gender identity might be my issue.

I never really fit into the female box. In fact, I forced myself most of the time to fit. I started to identify myself as gender queer, which felt OK. I started reading books and researching gender identity/expression, and at some point decided I needed to talk to a professional who understood gender identity/expression. I approached Tara with the wish to visit the University of Minnesota Human Sexuality Clinic. Because this was such an internal process, I had failed to share my struggles up to that point with Tara. Understandably, she was completely surprised. This had been my silent internal struggle for over 30 years, and the majority of that time I thought something was wrong with me.

I came out as transgender after months of therapy. For me it felt like the weight of the world was lifted from my shoulders. I wanted to change my name, begin hormones, and tell everyone the news. Tara was overwhelmed, sad, and angry; and her identity shattered. She feared losing the person she fell in love with. She wondered if I had been intentional in keeping this from her all along. How would the people in our world respond? How would she respond to them? How would testosterone change my personality? How would this change her identity? She had many questions and concerns; I was focused on the future.

Naturally, Tara grieved many losses. She expressed anger, fear, and uncertainty. At times the future of our relationship was uncertain. Love carried us through pain, struggle, and a difficult process. Looking back, I realize the sacrifice and hard work my partner gifted me with through this process. All of the joy and anticipation for my new life meant loss, change, adjustment, and perseverance for my partner. It was with much grace that she supported me and our relationship through this transition.

I eventually came out at work, to friends, and my family. Legally changed my name, started testosterone, and eventually had chest surgery (paving the way to legally change my gender marker). I never wanted to hurt Tara. I just needed to become my authentic self to be the best partner I could.

Tara’s process of coming out was slower. She is fiercely private. This was complicated by my complete opposite nature of being an open book. The biggest fear was coming out to her parents and family members. I came out to her parents, and we shared the news with her family; despite her fears, they were and are tremendously supportive.

We have been together 23 years. In 2010, we got married. When people ask me the question, “If you could relive one day, what day would that be?” My answer is simple: The day I publicly said, “I do!” I love Tara with all my heart, and that day meant so much because we shared our love with dear family and friends.

I hope our journey together lasts another 23+ years.