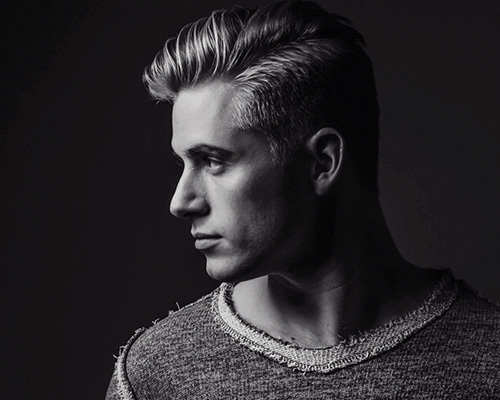 Growing up I didn’t know what “gay” meant. I knew boys and girls grow up and got married. That was just how it was.

I did have a curiosity about men. They made me nervous but were so intriguing. I never thought I might be “gay,” whatever that was.

In high school my mind played tricks on me. I’d started puberty. People would ask me, “Are you gay?” and naturally I would say, “No?” Nobody wants to be different growing up. But the more I became attracted to guys the more nervous it made me. It wasn’t until I was about to graduate that I accepted and admitted it. Maybe it was because I knew I’d never see most of those people again, like a fresh start.

I’d been competitively figure skating for 10 years before I found myself in a dance workshop hosted by one of the university’s dance organizations, UW Hypnotiq. I tried out for fun, and ended up being involved for several years. It was the first time I ever played with the idea of dance training, let alone an “8-count.” One thing led to another, and now I make a living teaching competitive dance.

With this new path, my curiosity about LGBTQ nightlife was unleashed. I was 18 when I first experienced a gay bar. The first time, I went alone. At this point I still hadn’t had the “talk” with my mom. Instead of asking to go it obviously made more sense to sneak out with her car, right? The next day I told one of my closest friends. After that it was both of us who ventured out every week. It became a ritual: sneak out, take mom’s car, pick her up, and we were off to the races.

My friend would climb out of her window, and together we would go to FIVE Nightclub, for their Tuesday 18+ nights. It was there that I witnessed my first drag show—and I was fascinated! I started helping out with monthly shows and slowly got involved in the community. These people were fearless, and I admired that. I wanted it for myself. Right before I turned 21 I ran in a small contest at the club and qualified for Mr. Wisconsin USofA. A few months later I competed and was crowned for 2011, then placed fourth at the national contest. It was the highest placement Wisconsin had ever reached in this system. It was definitely an unexpected experience, but a great one. This and UW Hypnotiq brought my desire for dance and choreography to life.

Today I dabble with drag. I decided to keep my name because it’s not an alter ego for me. It’s not a new persona, I’m still Joey. Who knows where this will go, but already it’s opened up other opportunities and new connections. It’s exciting and has done a good job filling the void of a creative outlet. Even though I’m brand new in a way, I’m a perfectionist. I treat it like a job and, to quote my boss and mentor, “The way you do one thing is the way you do everything.”

With all of these experiences I’ve developed a huge passion for performing arts. I’m so happy I went to that dance workshop years ago at U.W.-Madison. It completely moved my path in another direction. I have a dream of being a world-renowned performing artist and choreographer. It will become a reality, I’m certain. I have a notebook specifically for ideas I come up with, and once I put it down on paper I see it all unfold, almost like it’s magic.

I am a very lucky kid. I say “kid” because, in my eyes, I’ll always be mom’s kid no matter how old I get. My mother has been there for just about everything. She may have raised an eyebrow once or twice, but has always been right behind me and embraced who I am. Growing up, I took that for granted. I thought, that’s just how it’s supposed to be. It wasn’t until I met other people in the community and heard their stories that I finally realized how lucky I am. I am blessed, truly, and almost feel guilt for how I didn’t see that before. She really is an iconic woman in my community. I have, on more than one occasion, told friends to reach out to her when they needed advice about sharing their sexuality with their family, or even just to have someone to talk to about it.