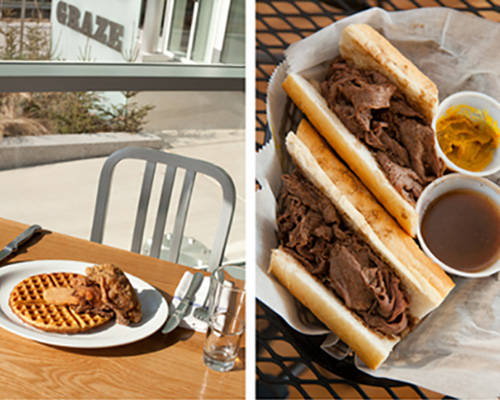 Maybe Mom had it right—comfort food is where it’s at. Culinary media outlets are selling the concept like hotcakes, and even fine dining restaurants are tapping into the feel-good power food can bring to the table. And then there are places—gritty holes in the wall, quaint diners, and such—in which comfort food has and always will be the unapologetic golden child.

Customers are on board with the idea of comfort food, especially in a tight economy and stressful climate in which value and some levity in food is prized. My take is that there’s also been a gradual shift toward an appreciation for simple pleasures and a little nostalgia.

To me, comfort food is any food that makes you feel good. Go to another part of the globe, and that might be chicken feet from a food cart or a steaming bowl of pozole. Our choices are highly personal—the thoughts and associations behind the foods we seek for comfort. Madison has been good to me in this respect, and I’d like to highlight a couple that I overlooked at first and then felt a sense of discovery when I found them. Other places serve specific menu items that I find particularly difficult to track down in Madison.

Umami Ramen and Dumpling Bar
923 Williamson Street: I used to live about a block down from them and excitement for their 2011 opening had been building since I saw a makeshift sign go up on the lawn in the fall. It was absolutely worth the wait, and it fills a niche Madison has been lacking to date. I’m particularly fond of the tonkatsu ramen bowl with char sui pork. The noodles are custom produced by RP’s Pasta and the dumplings are some of the best I’ve had—the wrapper is soft and chewy on one side and seared to a crispy golden brown on the other—which reminded me of making mandu, a Korean version, with my mom.

Batch Bakehouse
1511 Williamson Street: When I was in junior high, the cafeteria served cinnamon buns, which I’m sure were frozen and from a box, but they ruined me forever with their sugary crisp, tall walls and gooey center until I met the Batch morning bun: a pecan sticky bun with all the right dimensions and a lovely crisp exterior with a soft chewy center. Grab a slice of “Lauren’s Mom’s Apple Cake” if you can, or check out a host of savory artisan delights, such as the bacon cheddar scone.

43 North
108 King Street: They know the way to my heart and it’s through pork belly. I practically hunt eggs Benedict for sport, and I thought I had seen it all until I tried the “fried pork belly, chocolate peanut banana bread, poached egg.” It is served for brunch at 43 North in the likeness of a Fat Elvis. It’s glistening in brown sugar hollandaise, which brought back sinful memories of me eating brown sugar by the spoonful.

Full of Bull Famous Roast Beef
605 E. Washington Avenue: Hands down one of my favorite places for “fast” food that doesn’t cut corners. Rather, their roast beef, turkey, and pork are slow-roasted and it’ll take two hands to hold one of their sandwiches, so don’t eat and drive. My favorite is the elusive French dip, which is nearly impossible to find on Madison menus. Also noteworthy are the chili cheese fries. Their “Pilgrim” sandwich reminds me of what my partner’s family calls a “fatbowl”—Thanksgiving leftovers piled into one bowl—or in this case turkey, cranberry sauce, and bread stuffing in a French roll.

Graze
1 S. Pinkney Street: Your one-stop shop for globally influenced comfort food made with local, sustainable ingredients. The menu does an especially good job of bringing together items you don’t often see on Madison menus, from roasted bone marrow to a sustainable fish fry. As a die-hard Roscoe’s Chicken and Waffles fan, my heart flutters at the appearance of fried chicken and waffles on the menu. Pork3—with roasted pork loin, potato sausage, and pulled pork shoulder—is for people, like me, who couldn’t possibly choose between the three.

Plaka Taverna
410 E. Wilson Street: This charming successor to Cleveland’s Diner has kept Cleveland’s popular breakfast menu with Greek-inspired additions and an entire lunch and dinner menu pulled from owner Telly Fatsis’s Greek mother’s arsenal. My olfactory memory can’t let go of the Rock the Casbah Scramble with Moroccan Chicken. It is chock-full of flavorful, aromatic chicken, and fresh vegetables with a side of some of the best breakfast potatoes in town.

Cottage Café
915 Atlas Avenue: I was introduced to this place about a year ago and then quickly made up for lost time at this charmingly dated diner full of pleasantly gruff waitresses, fake plants, and real serious portions. It reminds me of little mom-and-pop places my dad liked to go to out in central California, though the country fried steak at Cottage Café has any place out there beat. The key is the country gravy, equally good on an order of their biscuits and gravy.

Mad Dog’s
309 N. Henry Street: Say what you will, but my mom used to fry up hot dog slices dipped in egg and I’ve had a thing for hot dogs ever since. This is why I can’t believe it took me so long to find Mad Dog’s. One fine lunch break during the Scott Walker protests, I stumbled in. I couldn’t have been happier wearing a BBQ sauce mustache, sitting on a bar stool, and listening to Bruce Springsteen in this little hole-in-the-wall full of union workers. I was enjoying the “Dirty Harry”—a beef hot dog topped with slow-roasted pulled pork in BBQ sauce. This is food for hard-working people who’ve worked up an appetite.