From Dream to Reality

I came of age in the last gasp of the Rust Belt’s glory. In the late 1970s, Janesville possessed one of the best school systems in the state. Children of General Motors and Parker Pen line workers could choose from three foreign languages plus Latin as early as middle school. A former ballerina taught us ninth graders how to spot a logical fallacy as we constructed an argument. A teacher who graduated summa from Harvard ended our Humanities course not with an exam, but with a “creative response” project.

In the Janesville where I grew up, my family went to church every Sunday at a United Church of Christ congregation. Our pastor had marched in Selma. He taught us about white privilege. In tenth grade, our church took us out of Janesville into methadone clinics in inner-city Chicago, and to service projects standing chest-deep in icy northern lake water breaking down a pier at church camp.

My grandmother taught me to set the table as if “Pat Nixon were coming to dinner.” She taught me that we all owe the world some service in exchange for taking up space. My father, the child of two immigrants, dropped out of school in ninth grade and became a high-skilled, blue-collar worker after he served during World War II. He wore his name on his work shirt, and he carried a black lunch bucket and a half-gallon thermos of black coffee to work. My mother was a secretary for a non-profit adoption agency. Once in a while she brought babies home to spend the night, in transit from foster homes to their new families, with our living room as a rest stop.

The American Dream was never a concept to me: It was just the way my family—and everyone we knew—lived their lives. My uneducated father was not satisfied if I got Bs on my report card. My pink-collar mother expected good grades, a full calendar of nerdy extra-curriculars like theater and Model United Nations, and “act like a lady” behavior in full hair and makeup. I was expected to do well enough in school so that the assumed progression to college would be covered through academic scholarships. My parents certainly couldn’t afford tuition. So in 1981 I went off to Mount Holyoke College, the oldest women’s college in the country, an elite educational institution focused on preparing women for a life of leadership and purposeful engagement.

I was raised—and then educated—to be useful. Back in 1985, I didn’t anticipate that my service would be to preserve the American Dream that created me. My hometown’s General Motors plant rolled its last truck off the line on December 23, 2008 into an American economy ravaged by the Great Recession. Six months later, the long-downsized Parker Pen closed its plant.

I go to work every day to build the new American Dream—a healthy environment, nature restored, both inseparable from an economy with opportunities fueled by clean technology and respectful of limited resources. This is the work I’ve been doing for more than 30 years. We’re not there yet. But we will be, soon.

“The arc of the moral universe is long, but it bends toward justice.” Nineteenth-century theologian Theodore Parker, then Martin Luther King, Jr. promised us this. When I was young and part of the dimming tail of the comet of American industrial might, I didn’t see where the trajectory was going. When I started my career in energy efficiency, I didn’t see where it was going. One of the great delights of middle age occurs when you have logged enough time to see the arc, and you can plot yourself and your path along the way.

I have seen this happen with LGBTQ people in my lifetime. I’ve seen us move from barely-visible glimmers—like that boy in my high school swing choir, or the girls in gym class, just a little “different” back in 1977. Then we became visible—the big group of women in flannel and severe haircuts in my college dining room. (One of the first things I did when I was coming out was to chop off all my hair. It’s what you did to be identifiable to other lesbians in the hair-dominated ‘80s, when full hair and makeup was considered a sin of collaborating with the oppressor. Thankfully we’re past that now.)

We marched. We wore pink triangles. We started to show up on TV. We became squares on the AIDS quilt as it grew and grew across the country. By the late ‘90s, my best friend and I were begging her 13-year-old not to come out in middle school—to wait until high school, when his peers would be more reasonable. His response? “Silence didn’t free the slaves, mom.” My wife and I were married by our church in 2002; it took government 11 years to catch up with the arc’s trajectory towards equality and justice. But once popular culture and half the churches are on your side, official institutions limp along behind. And we get there. 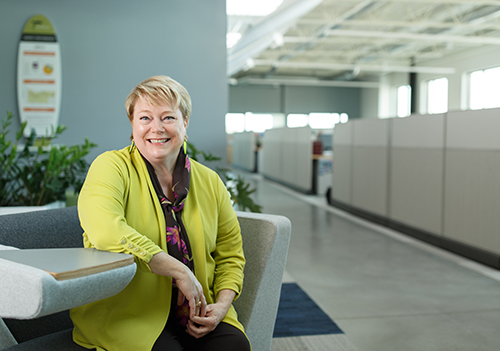 I’ve seen it in our relationship with the environment and economy, too. I remember the first Earth Day. I was in second grade. We planted a tree in the front yard of Adams School in Janesville. In those days, we all loved the environment. We stopped littering. We started to clean up some of the messes left in the wake of the industrial revolution. Environmental protection made so much sense to so many people that the polluters had to start pitting workers against endangered species to hang on to the legal blessing to trash the biosphere.

In 2015, I was in Paris as part of the U.S. Green Building Council’s delegation to the U.N. Climate Conference. I sat in a room with 1,000 mayors from across the globe while United Technologies asked cities to stand up and demand a global climate agreement; while Elon Musk, founder of Tesla and Solar City, demanded a price on carbon. Every city leader in the room spoke about climate solutions as a way to make their cities healthier, more inclusive, and more equitable in the face of accelerating urbanization. Muscle cars and designer pens are part of the old economy; super-efficient air conditioners and electric vehicles powered by rooftop solar will pay for the next generation of blue collar workers’ college educations.

Most of my work is closer to home. For nearly 20 years, my team at Seventhwave gathers the best builders and remodelers in Wisconsin at the Better Buildings, Better Business conference. Nearly 1,000 come. Their political views run the gamut, yet there is universal agreement around what quality looks like: homes that don’t waste energy, that are properly ventilated and healthy, that are easy to maintain, and that retain and build their value as part of a family’s American Dream.

This year I am leading Seventhwave’s collaboration with the Green Veterans to launch Green Vets in Wisconsin. I’ve seen first-hand how plugging into the green movement helps ease the military-to-civilian transition. Vets find a new mission that’s as big and inspiring as protecting our country. They find a path that makes sense for them—whether its mediating food waste through vermiculture and literally building new soil to grow food, or becoming a building scientist to improve the buildings where Americans live and work. Veterans are breathing new life into sustainability, feeding the movement with their energy and work ethic, making it more diverse, and helping us bring the health and economic benefits to underserved people.

That’s the arc of the American Dream. The language is poetic. It is aspirational. But the path is real and personal and concrete. It’s the insulation crew plugging up the leaks in my house. It’s the hybrid car that I drive that was built by U.S. workers. It’s my friends Lorenzo and Brian, Army vets who have six acres between them to grow organic food out of garbage. It’s using daylight to illuminate Seventhwave’s office instead of electric light, making our space efficient and beautiful and healthy. It’s a 13-year-old who can come out in middle school without worrying whether or not they’ll be safe.

These are the fundamental American values I learned at home, at church, and at school in Janesville and took with me to college and then to work. There have been setbacks, and there will continue to be setbacks. But what I know is that every individual decision—at home, at work, in our community—can move that arc forward. Each of us carries the American Dream inside us and the power to bring it alive with every choice we make.

In January, my college girlfriends and I marched in Washington, DC. States’ support for energy efficiency and renewables are surging, and Seventhwave’s experts are helping to craft the new regulatory paradigms that will accelerate a clean energy transition. More important than policy, the public has begun to expect energy efficiency and to demand renewables—especially solar. Like the first Earth Day, clean energy inspires most Americans.

My optimism comes from two forces: First, the smart millennials I work with. They back their values with technological savvy and the certainty that they can create something better than the status quo. They fire me up. Second, by the roar of millions of Americans rising to defend the values we share. The American Dream is not in government—it’s in each one of us. I will continue to work with millennials and veterans and builders and anyone else who heals the environment and secures our energy future to keep the American Dream as alive and tangible as it has been for me.