As a gay male, I had it relatively easy growing up. I was raised by a supportive mother in a gay neighborhood in Chicago. I felt comfortable coming out when I was 15. The only resistance I met as a teenager was from one of the nuns who instructed at the parochial school I attended. She thought I wasn’t praying enough. So I prayed, but not for the sort of things she might have envisioned.

You see, being gay wasn’t a big deal for me. I was surrounded by kind and loving people in the LGBTQ community every day. My mother, who at the time worked at the Archdiocese of Chicago, instilled in me early on that everyone deserves the right to love who they choose. After all, she herself was the product of a biracial relationship at a time when interracial marriage was seen by many as taboo—or, in some states, unlawful.

I know I was one of the lucky ones. I was never bullied or harassed for being gay. I had amazing LGBTQ role models and had a sense of belonging from a very early age. I wasn’t “different” because everyone around me was just like me. Not everyone shares that story, and I have an appreciation and deep respect for those who have struggled in their journey or continue to do so today. But my whole life wasn’t a fairytale, either. I write this also as a proud person of color.

Color can’t (and won’t) be hidden

Yes, as a gay teen I didn’t experience much hardship. As biracial Black child, though, I certainly had some troubling experiences. It’s funny when I tell these stories about my upbringing because most wouldn’t necessarily think that coming out as gay was in fact much, much easier than it is to exist as a Black man in America. But if you think about it, that is one thing I could never hide. But why would I? Just as I was taught to be proud of being gay, I was also taught to have pride in my ethnicity and heritage.

Herein lies the issue: I wasn’t pulled over for that trivial traffic infraction for being gay. I wasn’t followed around the store by loss prevention because my partner is a man. I don’t have white women clutch their purses as I walk past them on the sidewalk because I’m a proud, card-carrying homosexual.

I can go on and on with dozens of examples in my life where these things have happened to me. And from an early age I experienced that I wasn’t treated in this way because I was gay. I was being treated differently or provided “special attention” in some situations because of the color of my skin. Plain. Simple. Done. People of color across this nation share too many of these same experiences for that not to be the truth.

Being the change you want to see

Here’s where my mother comes in again. I was always taught if you think something can be done to fix a thing, you try and fix it. If you want things to change you shouldn’t simply sit by and wait for someone else to do it. I wanted to be part of the solution.

In Chicago, I had many contacts with the police. I can tell you that none of it was for deviant behavior. It was for driving, biking, or walking—and doing all of these while Black. I don’t live in a dream world or warped reality. This truly does exist in some environments, and I can testify that the feeling of being targeted or given unwanted attention because of the color of your skin is absolutely humiliating. And it was in part due to these experiences that I became a police officer.

I joined the Madison Police Department in 2002. It was my first genuine job out of college. At 22 years old, I was one of the youngest persons in my academy class and also one of the few persons of color. I can tell you that the vast majority of my experiences thus far in my career with MPD have been positive, but I am not too blind or bold to say that there’s no room for improvement in this profession.

At the end of my shift, when I take off my badge and hang up my uniform, I know that there’s chance that I will be stopped on the way to my home outside of Madison. And when I’ve been stopped, it’s unfortunate and telling how that interaction changes when it’s discovered what I do for a living. Why should that matter? 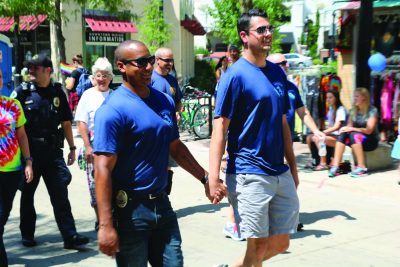 So the bottom line is this: I get it. I get the frustration and distrust. I get the fear and the hopelessness. I understand what it’s like to feel as though you’re getting more attention on the drive home. It’s my reality, too. And I’m living on both sides of the fence. It’s what drove me to this profession and to try to make a difference. I work with some good people who truly care about their fellow man and woman, regardless of race, sex, creed, or sexual orientation. But yes, there’s more work to be done.

We’re a work in progress, keeping true to one of our core values of Continuous Improvement. Did you know that MPD has internal groups dedicated to exploring recruitment and diversity in the workplace? There is also an in-house workgroup whose sole purpose is to address the issues of unconscious bias in policing. And recently, MPD started a workgroup called MPD Pride that’s comprised of LGBTQ officers and friends. This group’s mission is to serve as a resource and a point of contact between MPD and members of the LGBTQ community with a goal to address the trust gaps that exist between our community and the police.

So I say this: you be you, Madison. Continue to speak up for racial justice and equality! Speak up for the underprivileged and destitute! Shout for the systemic change that needs to happen! But do me this favor, too; while doing all these things, please consider putting down the protest sign for a minute to stop by your police department and pick up an application. I echo the words of Dallas Police Chief David Brown who, after the massacre of five police officers working a protest event focused around the issue of change in policing, said, “We’re hiring!”