Gift-giving for people you love (and hate): An interview with John Waters 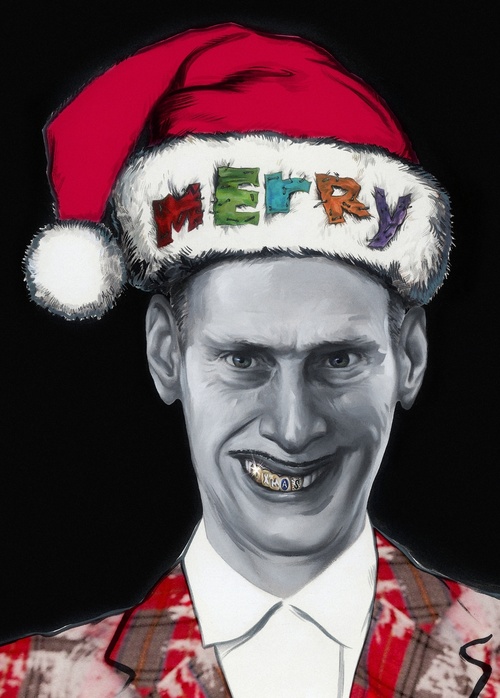 So. The election. Where do we go from here?

Look, we’ve had a lot of terrible presidents. Reagan was a terrible president. Trump is even worse. I would’ve been happy not to see his family anymore. He brings them out every chance he gets, so it’s not unfair to say that. I don’t want to see Tiffany Trump anymore, I just don’t. I resent even knowing who she is!

I am not even sure Trump wants to be president. It’s like he was afraid his name would suddenly mean “loser” if he didn’t win. You have to win if you get this far. When it comes to Trump, I’m with Rosie O’Donnell. Rosie has a real sense of humor. I mean, she’s playing a gym teacher in Hairspray: The Musical!

What if the whole thing was hacked? Can you imagine? What if everyone had to vote again? But let’s be real, hackers don’t do it for political reasons. They do it just to prove they can do it. They’re the new juvenile delinquents. They’re cool even though they stay home, have bad posture and dress poorly. I’d be a hacker if I was cool enough.

Gay bars are closing left and right. Should we be worried?

I’m all for the idea of gay bars, but do they have to be so straight? My first gay bar was the Chicken Hut in Washington, D.C. I took a look around and thought, “I’m queer, but I ain’t THIS!” It was so straight. It was the opposite of Bohemia. Everyone was so square. They believed in the same things as straight people, the only difference is that they were gay.

Being gay was more fun and exciting when it was illegal. We were all sneaking around like outlaws! Young people don’t want to be in a “gay” bar. To them, that’s like going to a “black” bar. It doesn’t even sound right anymore.

While I understand the need for gay bars, I never liked the so-called “good” ones. I’ve always preferred the most pitiful ones, the ones straight out of John Rechy, but there just aren’t many of those left anymore.

I still love the Corner Pocket in New Orleans. It’s one of those old school hustler bars that are more mixed. I once took the entire Warhol Board to New Orleans to donate money after Hurricane Katrina. What a sight: all of them standing around in suits, talking to completely nude people! It was lovely! It would depress me if the Corner Pocket closed, but it certainly wouldn’t surprise me.

I’ve battled my whole life against separatism. Separatism is defeat. All of my friends have always hung out together: gay, straight, queer, whatever. Nowadays, we have things like the bear movement. Why do they only hang out with people who look just like them? My friends don’t have to look just like me.

My favorite line from Female Trouble is “Excitement is not always clean.” As cities get cleaner, are they becoming less exciting for LGBTQ people?

Nowadays, nobody has to leave where they were born. Everywhere is hip. Everywhere is cool. Nobody has to run to New York City anymore. I don’t know anything wild and new going on there anymore anyway. If they’re wild and new, they probably can’t afford to live there! The secondary cities, the cities people used to leave….that’s where you find Bohemia now. It’s harder and harder to find it in major cities. If you’re trying to find Bohemia, look for the neighborhood that has all the good bars and a scary walk to the car.

San Francisco has definitely become less gay, but don’t we have enough gays? It should be about quality not quantity. People should have to audition to be gay. People should be allowed to come in. Let them be gay for awhile, and then go back to being straight if coming out doesn’t work. That’s way more fascinating! That’s the kind of sex club I want to open. It’s very 2017!

Divine shattered the status quo by being a gender terrorist, not a drag queen. What have today’s drag all stars learned from her?

Gosh, drag’s so much better nowadays. Divine had a definite influence on that. Drag queens were just so square back in our day. They wanted to be real women, Miss America, maybe their mother? They were straight out of that movie, “The Queen.” They took things so seriously that they couldn’t even laugh at themselves. Divine didn’t want to be a woman. She wanted to be Godzilla. It was incredible!

Going mainstream has brought back the right kind of drag queen. They’re hip, edgy, ironic, even scary. People need and want to be scared from time to time. The public has embraced drag in a big way – and that’s amazing! I know RuPaul has been working really hard for a really long time. He needs to be commended for what he’s done. Even if you lose on RuPaul’s Drag Race, you can still have a fabulous career. The girls are still getting jobs years after the show! It’s great for employment. The government should really give Ru a grant.

Who’s inspiring you right now in the world?

That’s a good question. People who make me laugh always inspire me. What can actually be Bohemia in 2016 is inspiring to me. Baltimore has a great music scene, with bands like Wye Oak and Beach House, who got successful and never left. It’s tough to be cutting edge when everything has become so normal. I hire youth spies to tell me what’s new and going on. I don’t go to clubs at 4 a.m. anymore, but I want to know what’s going on there. I would pay them in Bitcoin, if I could figure out what Bitcoin was.

I love reading the radical feminist work of Andrea Dworkin. She believes that all heterosexual sex is rape. I don’t know if I believe that, but what if she’s right? I love to read sexual theories and consider them. It doesn’t mean I agree with them, but they definitely make me think.

We’re thrilled that you’ll be back in Madison on Friday, Dec. 15 at the Barrymore Theater. What can your fans expect from the show?

Well, they can expect a LOT. Even if you hate Christmas, even if you don’t celebrate Christmas, you can’t avoid it. I talk about everything I want for Christmas, what I want to give you for Christmas, all the tragedies that happen on Christmas, what kind of presents you can give to people you love (and people you hate,) what is acceptable behavior at Christmas parties, what to expect on planes during Christmas… I really fetishize the whole idea of Christmas. I take it as far as, is there such a thing as Christmas sex? Christmas affects everything. It doesn’t care if you believe in it or not, it’s still coming for you. Are you ready?

So what does John Waters want for Christmas this year?

I want a bookshop that would never carry candles or greeting cards or candy or any of that other junk and somehow still make money. If I caught someone shoplifting, I’d hand out literary punishments!

Get more info and buy tickets for the show at BarrymoreLive.com