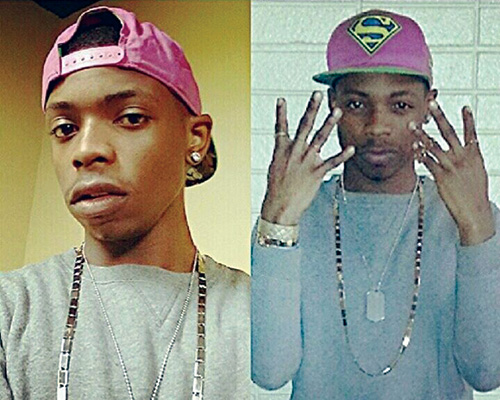 My name is Quintin Smith-Bickham.

I am a Youth Activist.

I just also happen to be an African-American and homosexual.

I was born and raised in Milwaukee, Wisconsin, and attended many schools including Messmer and Pulaski High School.

I grew up in a single-parent household with my mother. My mom made sure I went to school and got my homework done, and she made sure I was always on my best behavior.

There have been a lot of situations that have shaped who I am as a person. My dad’s passing was a huge factor in me questioning life itself and why things happen; he was gunned down in August 2004, when I was only nine years old. Soon after, I started to experience bullying and torment, which ultimately turned me into a bitter person.

I always knew I was gay. It was just a thing about guys that attracted me, even at a young age. I never really had a boyfriend or anything, but I was always gay. Before high school, I would deny and deny and deny everything. I even had a “girlfriend” (which I still feel bad for). I hated myself for being gay; I felt like a disappointment. It was as if I had let everyone down, and I was constantly trying to compensate. Dealing with all those emotions started to take a toll, and I ended up really acting out.

I never really came out. I just began to show out, hang with the wrong crowd, and stop denying the accusations.

By my sophomore year everything I had been suppressing and hiding caught up to me, and I was spinning out of control. My mom tried everything from a psychiatrist, physiology, behavior clinics, etc. I was on different behavior medication and at the point where I wanted to die.

It was a lot for one person to deal with, and living in a city where being gay was NOT cool, and every day there was something to worry about.

It all came to a head in February 2012, when I tried to harm myself and my mom called the police. They arrested me and took me to the County Mental Complex. I stayed there for three days and two nights. I had never cried so much and been so uncomfortable in my life. It was the lowest moment of my life—and the point where I started to detox from the negativity and demons from my past.

I began to get involved in cheerleading, singing, choreographing, created a safe sex campaign, and eventually joined Diverse and Resilient’s “Be YOU” team, as well as 414 ALLs condom campaign. I learned so many things about activism and promoting positivity in our community.

2014/Senior year has been a breakout year for me. In October we started Pulaski’s first Gay-Straight Alliance, with the help of the Violence Free Zone. We had a lot of help from Kelly Lockwood (history teacher), Amanda Buss, and our wonderful principal Darrell Williams.

The group consisted of over 30 young people, varying in grades as well as ethnicity. We met on Tuesdays around 11:30 for about one hour and focused on team building, trusting each other, bringing peace and love to our school, and bridging the emotional gaps between our students.

Our GSA held spirit weeks, participated in school-wide events, bake sales, and more. We even got a visit from The Gay Men’s Chorus for a special performance that really motivated our school to eliminate bullying and to participate in National Day of Silence, when more than 1,500 students wore rainbow tape over their mouths for an entire day. It was a moving demonstration of how far our school has come.

As only one of a small group of GSAs in Milwaukee, we have received numerous requests for us to work with other schools, resulting in my going to a Madison high school to speak with their GSA students.

I am proud of all the work I have been able to do in the last two years as well as all the accomplishments: being Pulaski’s first openly gay Prom King and receiving the GSAFE Scholarship Award as well as a citation by the Wisconsin State Legislature. It’s all because of the angels in my life, including Ms. Sharlen and Reggie Moore, Charmaine Harris, Jeremy Triblett, and my entire family who have been supportive of everything!

I am now a high school graduate and about to start my year of service with City Year Milwaukee. I will dedicate one year to mentoring youth in Milwaukee. I do not know the site I will be placed at, but I do know that I am ready to change someone’s life!

Finally, I am very hopeful that I can start doing more dance choreography and modeling. I ultimately dream of being in show business and being rich and famous, giving the LGBT community a good name and eventually giving back to my community and being involved in many humanitarian projects. Basically, a gay Michael Jackson!

I am very blessed and thankful for all the opportunities and chances I’ve been given. I feel like God has chosen me to be someone who lifts others up in some way. I believe that this is only the beginning.