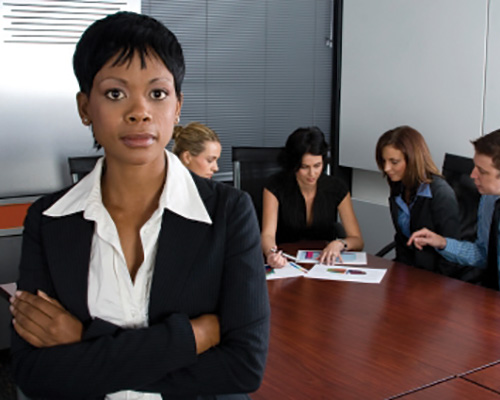 Recently I have been witness to several complex situations that demonstrate an implicit desire to silence the authentic thoughts and feelings of people of color. Even “nice, good” white people like me contribute to the racism that people of color experience daily, demonstrating the cultural, interpersonal, and communication norms that hold such power in dominant white work cultures. Let me explain.

For those of you who are white, imagine being a person of color in this or a comparable situation. A moment of racism or simply a complex moment that is racialized plays out, and you are faced with several choices about how to handle it:

A. Say nothing and consciously try to ignore race/racism, which can take a personal toll on your sense of empowerment and your desire to be authentic.

B. Say nothing, but your continued interactions with that white person make it clear neither of you care to interact with each other, which can result in ongoing tension and anxiety.

C. Speak to the issue directly and risk being labeled as angry, violent, or unprofessional, which can then lead to you being treated differently. In the worst cases, you can have your job and reputation threatened, or you can lose them both.

D. Speak to the issue directly and be supported by your supervisor and organization, knowing this may mean the organization risks its own funding and reputation.

In each of these scenarios, regardless of how a person of color chooses to handle them, there are great emotional costs, fears, and risks. At the same time, regardless of the person of color’s choice in how to handle the situation, the outcome is largely dependent on the response of the white people involved—which speaks to the nature of power and institutionalized racism. Given how common it is for those of us who are white to completely lack skills to recognize racism or simply talk about race, the odds are stacked against the person of color. This is the nature of racism.

The Work of White People

What then can a white person do who finds themselves in one of these situations?

1. If an issue is brought up to you that demonstrates a conflict with a person of color or your own racism, don’t take it personally, but do engage more deeply. All of us who are white are complicit in racism. It’s part of a centuries-long legacy passed down in white families and institutions. While it’s not your fault, it is your responsibility to try to interrupt this system. While many white people don’t have experience directly addressing conflict in general let alone conflict about race, this is a critical skill to learn in order to be able to effectively address racism. So start leaning into the discomfort of conflict, share your emotions, be vulnerable, and make it your common practice.

2. Build relationships with other people who understand and can talk about racism, both white people and people of color, who you can lean on for support and advice in these situations. While we all have our support people, if your support generally comes from people who don’t really understand racism, the only messages you’re going to get are ones that reinforce your default response—to convince yourself that you’re right, the other person is wrong, or the situation is hopeless and there’s nothing you can do to shift it. People who understand and can talk about racism will be more likely to understand the complexity of a situation, challenge you in shifting your own response to effectively repair any harm done, and relate to you in the experience that the work is not easy.

3. Consciously work to build a relationship with the person of color, despite your mental and emotional desire to avoid them because of a challenging situation. At the White Privilege Conference this past spring, Dr. John Powell spoke to the ways that our brains’ neuropathways actually become hardwired to reinforce the racism we take in from everything in society, even in children who are only several months old. I know that when I have a conflict with a person of color, regardless of whether or not it is about race, my mind and emotions’ first response is to think the person hates me and then fear or avoid them. This is my hard-wired brain, steeped in the covert and overt racism I have soaked up from the world around me for 30+ years. I consciously have to recognize this tendency and tell myself, “No, that moment does not define the person of color as angry nor does it define me as bad. I will choose to overcome my emotional desire to avoid or fear by instead reconnecting with the person and working to strengthen our relationship.”

To bring this last point home, I’ll share another scenario and an example of a white person using the principles above to address the situation:

In this situation, both people feel tension and avoid each other. The white person could choose to proactively address the situation by practicing the points above as follows:

The white staff member recognizes there is tension between her and her colleague of color, so she confides in a close friend who is savvy in understanding race issues. The friend suggests to her, “Perhaps you did something harmful to your colleague without even recognizing it. What could you do to address the situation?” The white staff member feels a little defensive at first. In reminding herself that all white people perpetuate racism and she doesn’t need to take it personally, she recognizes that her defensiveness is really a cover for her fear, insecurity, and guilt. She then spends some time processing these emotions with her friend so they don’t become blockages to her addressing the situation.

Several days later, the white staff person realizes she wants to say something but gets a little stuck in two places: 1) She recognizes her gut response is to fear and avoid her colleague of color. Changing that pattern feels scary. What if she is called a racist? 2) She wonders why she needs to initiate the conversation. After all, the tension feels mutual.

Then she remembers learning about the ways white people are conditioned to fear and avoid people of color after a conflict and reflects on the shards of glass analogy. Choosing to move through her fear, she goes to work the next day and asks her colleague of color to talk. The white staff person opens up the conversation by saying, “I’ve noticed there’s tension between us and recognize I may have done something I’m unaware of to cause you harm. Is there anything you’d like to tell me?”

The colleague of color shares her experience of being avoided by the white staff member while she seems to recognize her white peers without a problem. The white staff member apologizes, feels guilty, yet tries to not unload her guilt on her colleague, then promises to be more conscious of the ways she may be enacting racism without even being aware of it.

In the following weeks, the white staff person does a lot of processing with her race-savvy friend to process her emotions and work on not labeling herself as a bad person. She proactively speaks to her colleague of color on an ongoing basis. Although they don’t have a close relationship, they consistently interact, respect each other, and have enjoyed daily conversation. The tension generally seems to have been resolved.

While it may be more common to experience conflicts around race that have not been effectively resolved, resolution is possible—though it requires work from everyone involved, especially from the white person.

Have you had an experience like the ones I describe here? How have you handled them?

Kristen Petroshius is a Co-Director of GSAFE. She’s also a member of Groundwork, a Madison-based racial justice organization that focuses on supporting people of color working for racial justice.