Holding On to the ‘Hood 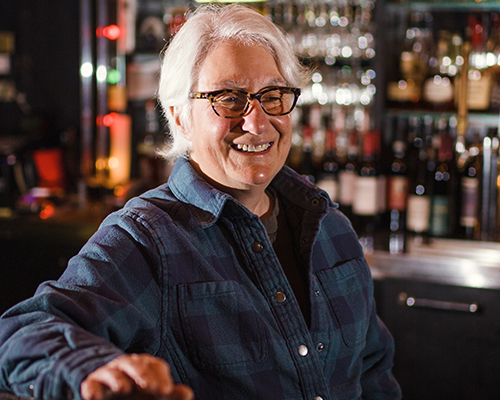 I was born in the Greenbush Neighborhood and lived there until it was razed in the 1960s. My parents were both children of Sicilian and Italian immigrants. My mother’s parents were Sicilians, which was the dominant culinary influence in our family. My father was from St. Louis and tragically lost both his parents at a relatively young age, so I never knew them. My mother, meanwhile, was born in the “Bush.”

I am number five of nine siblings, and we all grew up in a house where both Sicilian and English were spoken. It was always a challenge trying to figure out what the adults’ conversations were about. I regret that I wasn’t interested in learning the language as a child. I keep trying even now, but as we all know it gets more difficult as we age.

My mother worked in every Italian restaurant in the neighborhood. She was a great cook and at home we enjoyed the traditional Sicilian food of our heritage. It was what eventually led me to want to run my own restaurant. It’s in my blood.

Also apparently in my blood is a little mischief, as I discovered that my grandfather, known as Little Pete, was a bootlegger and sold liquor that was supplied to him through Al Capone’s men. Little Pete owned a bar/restaurant in the 1940s on West Washington Ave. called the Venus Café. My mom’s story was that they served great food, and everyone came there to eat. She said her older sister Frances worked there, but mom just had to clean it every morning during the summer. I’m not so sure mom really knew what was going on there.

I came across a newspaper story from 1943 about the café. To make a long story short, the city attorney asked that the Venus Café be enjoined from continued operation on the grounds that it was a nuisance.

Fifteen women, 32 soldiers, and 5 civilian men were taken into custody in various vice raids. Little Pete was often arrested for bootlegging but frequently got off because the judge owed him money (the judge was eventually charged for it). My mom thought her dad was a hoot. She said when the feds would come they would hide booze bottles wherever they could. According to my mom’s sister, Little Pete was dragged by a horse through Vilas Park by the mob in an attempt to get money from him. Whether or not it was a true story I may never know. I heard a whole lot of stories about my grandpa and his adventures—from being a stowaway to going back to Sicily only to come back again with my grandma and their first child.

Being a kid in the Greenbush I remember all the little groceries around the neighborhood. My favorite, J. A. Aiellos (or Mr. Joe’s as we called it), was right across the way on Regent Street from where we’re located now.  It’s a parking lot now, but back then it had the best smells in the world. The place was filled with warped wood floors, wooden barrels filled with olives and live snails, hanging cheese, and cured meats. The aromas were heaven. I haven’t smelled anything like that since. It’s where we would buy our semenzas (roasted pumpkin seeds). We could sit on a porch stoop for hours eating them. We also had a favorite store around the corner from our house called Mr. Frank Vitale’s. My dad would often send me there to get sliced salami and bologna.

There were probably four or five small deli-type grocery stores in the neighborhood. All the neighbors knew each other and looked after one another. The street blocks were, in general, short and tree lined. The houses were old but well kept. There were a lot of fruit trees, grape vines, and gardens. We had a big garden that my dad tended. Every spring he would gather the kids and get us to turn over the garden with the promise of all the worms we could want for fishing. We all loved to fish and would go to a low brick wall at Brittingham Park to toss our lines in the water, back when the lakes were still blue.

At Christmas time my mom showed off the best of her cooking skills. She made tons of Sicilian cookies, homemade pasta noodles, ravioli, meatballs, sausage, and speidini along with a pile of cannolis, including the shells, and several other traditional treats. I get tired just thinking of the work that went into it all. Of course they didn’t have food processors then, it was all done by hand. I had no choice but to learn to cook her food if I wanted to continue enjoying it as an adult.

The neighborhood was considered a ghetto by many but it wasn’t. It was a wonderful, small, colorful community where we all looked after one another and, like most people who experienced it, I still miss it. It was a very sad day for everyone when the city condemned the neighborhood and we were forced to move.

Keeping a taste of the ‘hood alive

Before the Greenbush Bar, I owned and operated another restaurant on Regent Street, The Wild Iris Café. I opened Greenbush Bar three years into running the Wild Iris, when I found out that what was then called The Cellar Bar was for rent. Wild Iris went well for several years, but eventually the lack of parking and the restaurant boom in downtown Madison helped lead to the death of that business.

My life partner (of 25 years!), Gretchen, and I took up the task of opening the Greenbush. It started out as a small bar with mostly appetizers for food. Business was okay, but not great, and we knew we needed to keep tweaking both the food and the bar. One day we decided to try serving three different sizes of pizza with “your choice” of toppings instead of us picking. That proved to be the ticket. Along with that, my partner and I worked on turning the bar up several notches. We always served good wine and beer but we added a great selection of not only Scotch and Grappa but also a great selection of Bourbon! Over the years we have expanded the bar menu with more beer and more specialty cocktails. It also hasn’t hurt to have the Kohl Center in the neighborhood.

I have never been a comfortable front-of-house person. My place from day one has been the back of the house. Although I have occasionally hosted, it’s just not my comfort zone. I prefer to work in the kitchen, making bread or pizza dough from scratch and even tackling dishes when it’s needed. Gretchen, on the other hand, is the best with our customers. She manages to make them not only feel welcome but also a part of the family.

We listen to our customers, too. They would hate it if we tried to change and become something we’re not. We’re not fancy and they don’t want us to be. I think people enjoy being able to get a good old fashioned plate of spaghetti and meatballs. We serve simple food with great ingredients, including meat from our favorite farmers at Pecatonica Valley Farm, whom we’ve worked with for years. We buy imported products from Italy whenever possible, too. You can’t beat imported Prosciutto or Pecorino Romano or Parmigiano Reggiano.

We also find it important to have a really good wine list with reasonable prices. If a glass of wine is $9 it’s a $9 glass of wine. I’m afraid too many establishments charge way too much for a glass these days and it upsets me because customers aren’t getting a clear idea of what a good glass of wine tastes like.

All in all, this business is as rewarding in as many ways as it is challenging, and there are big challenges associated with it.  As we all know, the cost of everything goes up and never down. We try our best to keep prices down without compromising quality. These days we sometimes struggle to find help, which I suspect has to do with how many restaurants there are in Madison now. We’ve been lucky, though, in that we’re able to frequently hire students due to our location near campus.

It’s an exhausting business, both mentally and physically, but as I age I find that the physical work is good for the body—even if mentally it sometimes makes me a little crazier. The only other issue I have is that it is very hard for us take vacations!

In the end, I enjoy what I do and feel lucky and fortunate to have a successful business. Being a part of the old Greenbush Neighborhood is the best part for me. It was a great residential area and it’s a shame that the city decided to strip Madison of the most diverse community in its day. We do our best to keep its memory alive.