If You Build It, We Will Come 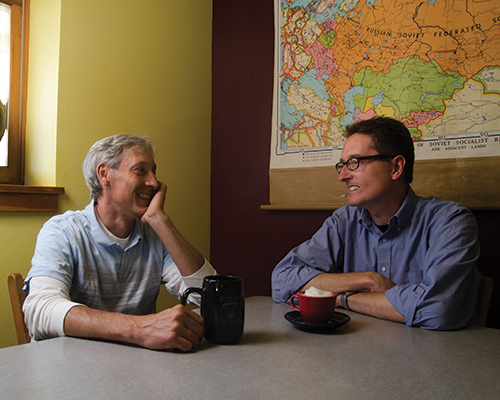 Who doesn’t love great food or great coffee? If you’ve ever stopped in to the Ground Zero coffeehouse or Cargo Coffee in Madison, then you’ve had both. Lindsey Lee and his twin brother, Lynn, are the owners of Ground Zero (on Williamson St.) and Cargo Coffee (on Park St.). The brothers Lee are about to open their third coffee shop, this time in a brand-new building on East Washington Avenue.

If you’ve driven west on East Washington recently, you’ve no doubt observed the construction of an apartment building on the north side of the road. This high-rise apartment complex is called The Constellation, and on the ground level you will soon see the Lee brothers’ third coffee shop (also called Cargo Coffee).

Lindsey arrived in Madison in the usual way (grad school) with his wife, Elizabeth. After an eight-year run in grad school, he concluded that this path was not working for him. Finding himself unemployed, he did some soul-searching to decide on what he did or didn’t want to do. The idea of opening a coffee shop seemed to stick, so with the help of Lynn and their father, the Lees built Ground Zero from the ground up in 1997. Back then, the only other coffee shop in the area was Mother Fool’s. And many people wondered (out loud), just how many coffee shops did this neighborhood need? But they quickly put an end to the naysayers by becoming a rousing success.

While Ground Zero was busy growing here in Madison, Lynn was still living in San Francisco with his partner, where he owned an art gallery that represented 25 local artists, along with his own work. Lynn earned his BFA in Michigan, but he also possessed a vast amount of experience in retail. In fact, both Lee brothers grew up working for their father, who owned a hat store in Flint, Mich. So when the opportunity to own a second coffee shop presented itself, Lynn decided it was time to move back to the Midwest to help his brother and run the new store. Cargo Coffee on Park Street was born, and again the Lee brothers worked their magic, and the business has been very successful.

As the road goes by, families begin to grow. Children come along and lives change. “In fact, Lindsey swore that there would never be a third coffee shop,” says Lynn. Both men are very hands-on business owners. Both are at the shops daily. Both are very involved with the neighborhoods where each coffee shop is located (neighborhood associations, city planning councils, etc). And both felt that they had enough on their plates, as far as their businesses were concerned. And then…

One day, a business owner by the name of Otto Gebhardt (owner of The Constellation) contacted Lindsey out of the blue. Well, maybe not the blue. Once upon a time, Lindsey had worked with Gebhardt’s mother on another project. She liked the Lee brothers very much. So, when Mr. Gebhardt told his mother about his plan for The Constellation, she told him about Lindsey and Lynn. After some deliberations, sleepless nights, and several caffeine-fueled discussions, the Lee brothers’ question turned from “How could we?” to “How could we not?”

Lucky for us, we’ll all get to see how this next chapter unfolds. The store is slated to open in January of 2014. Both Lynn and Lindsey are very excited to meet their new neighbors and to begin weaving their store into the fabric of this new neighborhood. They’ll be offering a lovely space to hang out in and lots of delightful sandwiches, soups, and so on, as well as the convenience of a drive-thru window for those of us who seem to be perpetually in motion. And I look forward to sitting down with my own family in their newest location for a coffee and a sandwich and to revel in that new-coffeehouse smell.

Jeanne Benink is a Madison chef and the sole owner of Simply Served Personal Chef Service. Her friends often call her the soup guru, and she truly does have passion for exploring soups and stews from all over the world.