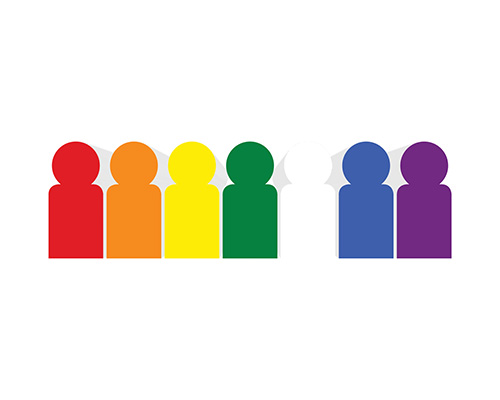 I would like to talk with all of you who may identify as LGBTQ internally but are not recognized socially as a member of that community. I would also like to talk with LGBTQ folks who are socially identifiable as such so we might increase our compassion and awareness for the invisibly queer among us.

If you are invisibly queer, you already know who you are. For the rest of the readers, let me provide some examples: People who identify as bisexual/lesbian/gay and are in a heterosexual relationship, people who identify as trans* and have not expressed their gender in public or visible ways, transmen and transwomen who are perceived as cisgender, the partners of those transmen and transwomen, gay men, and lesbians who are not socially read as such, especially if they are not currently in a relationship.

This invisibility can cause complex issues. In some instances it allows for continued access to privilege as part of a majority group and perhaps even increased safety, depending on how they are perceived socially. People who are invisibly queer probably don’t receive direct harassment as often as those who are socially identified as LGBTQ. Invisibility in this sphere also allows the person to decide when and to whom they wish to disclose their identity, and it can feel empowering to be in charge of “outing” oneself.

On the other hand, invisibility can be an isolating experience. I have a friend who used to be socially perceived as a lesbian, but now he is perceived as a “non-threatening short white dude” and has lost the ability to participate in the “lesbian nod” that was a part of his former community. He has had to remind himself, “Oh right, I am invisible to lesbians now.”

Those who are invisibly queer run the risk of social isolation from the queer community and even occasional hostility. The very community that should provide understanding and comfort can be outright rejecting. Lesbians hating on a person who comes out as a transman or the cis-appearing hetero-appearing person who is automatically treated with derision, fear, or exclusion by the very people who should provide deep acceptance are examples of this.

I have encountered a lot of grieving among trans* people or the partners of trans* people who face the loss of social community if they transition from being socially perceived as gay or lesbian and are now perceived as straight.

Exposure to hurtful comments is a hard experience for any kind of invisibility. People can be cruel when they think they are in heterogeneous company. They say things they may not always say in mixed groups. I personally have heard comments such as, “Did you see that ‘he/she’?” “That’s so terrible that someone would do that to their body; I don’t think it’s right.” “I just can’t imagine two guys doing it. That’s just gross.” As much as it makes my stomach churn to read those sentences, it is devastating to hear them when they apply to you personally and the speaker doesn’t know it. Especially when spoken by a friend or family.

I think this experience is even worse than the epithets thrown toward a visible difference, and it can really make a person shrivel inside. It’s a lot easier for me to be resilient in the face of some stranger hollering “Dyke!” derisively at me than it is for me to stand tall if a friend said, “I don’t understand those gender queer people; I think they’re just weird. They should just make up their minds about what they are.”

If you are invisibly queer and have heard rude comments and are afraid to come out to the people in your life, what are you supposed to do? It is important to start by working toward a deep sense of self-acceptance and acceptance from a few trusted others who know those invisible parts of you. Tell a few people about those invisible areas of your identity, plan for most friends to be curious, maybe surprised, and supportive, and also plan for a few to be challenging, in denial of your own declared identity, or uneducated about some aspect of your identity. This usually gets easier after you have done it a few times and once you have a few people strongly on your side.

I think it is also a good idea to have some quick prepared comebacks for those casual conversations when somebody may unknowingly insult you. For example, if you identify as bisexual and somebody says, “I think that bisexuals just haven’t had the guts to say that they’re gay yet,” you may wish to have a personal response (“Actually I identify as bi, and I can assure you that I’m not just on a path to being gay”), a funny but corrective response (“Yeah, because NO WAY could anyone possibly actually love men and women. Impossible!”), and an educational response (“Well actually, I heard that just under 2% of the population identifies as bi; it’s genuine”).

Finally, for those who are not invisibly queer: Please check your own prejudices and assumptions. Talk kindly about others, even if you think a member of that group is not in the room. Perhaps some of your friends or family are invisibly queer. Do you talk about bisexual people in a way that would encourage a friend to come out to you, or have they heard you say things that might make them shrink inside? By the way, kudos to the Madison Gay Hockey Association for adding “preferred gender pronoun” as an option on your player’s profiles this year. That’s a great example of a way to expand inclusivity for the invisible among us.

Sue Gill and her partner, Sheri, have lived in Madison since 2000. They keep busy with their two dogs, Frankie and Maslow. Sue is a psychologist in private practice and can be found at madisontherapy.com.