Jurist Prudes from the Past 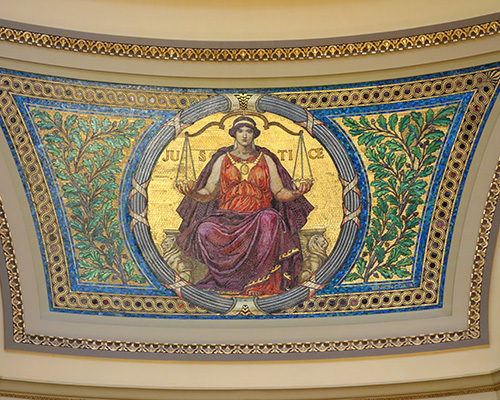 Today, when a Pennsylvania judge wants to consign marriage inequality to “the ash heap of history” as he strikes down that state’s laws barring same sex couples from marriage, we want to cheer. However, as one who rummages in the ash heap of history, I would recall that judges have not always been our great friends.

Over the last century many Wisconsin judges have ruled on cases involving LGBT people. Some of what they have said is quite revealing of attitudes towards homosexuality. Many cases arise due to criminal proceedings because the sexual activities of gay persons were criminal in Wisconsin until 1983, thus the most likely place they were to appear in official records was in the criminal record, as you will see.

In 1905, in the first sodomy case to reach the Wisconsin Supreme Court (Means v. State), outrage and broad disdain were the judicial themes. “We are unwilling to soil the pages of our Reports with lengthened discussion of the loathsome subject. There is sufficient authority to sustain a conviction in such a case, and, if there were none, we should feel no hesitancy in placing an authority on the books.”

In 1916, in Abaly v. State the case involved a complaint of sodomy by the individual upon whom the act was committed in Richland Center, and that supposedly happened on March 13, 1915. The defense was based on the fact that Abaly was not present in Richland Center on that day. The defendant was asked during the trial “whether he did not have improper relations with a certain person, naming him, other than the complaining witness.” This clearly was a prosecution focused on his status as a homosexual, not whether he had performed the said criminal act on said day. The Wisconsin Supreme Court, Justice Kerwin writing, found this “improper.” It was noted that the trial record also included unwarranted testimony: “A doctor was also permitted to testify that the reputation of defendant was bad, basing his opinion of defendant’s reputation upon stories and talk which he had heard after the prosecution of this case had been commenced.” The conviction was reversed. Since law regarded homosexuality as a criminal act, the court correctly ruled a criminal act must be proved—not a reputation as a homosexual.

In 1927, the Wisconsin Supreme Court gave a break to heterosexuals and lesbians by ruling that oral sex on females did not constitute a sodomy violation in Garrad v. State. “Sodomy, the crime against nature, has from earliest times been considered as involving the use of the male organ of generation.” Later the legislature would remedy this in 1955 by changing the crime to “sexual perversion” and making it inclusive. Furthering the penalties against sexual perversion, the 1959 legislature prohibited the granting of a driver’s license of anyone so convicted.

In 1928, the state Supreme Court upheld a conviction for sodomy in Verhaalen v. State. Despite the defense’s friends and neighbors testifying to the accused’s good character, the matter went beyond the particulars of the case. Justice Crownhart wrote, “The crime itself is so repulsive and detestable that one is loath to believe in defendant’s guilt, yet we must recognize the offense existed in ancient times, and recent legislation broadening the common-law definition indicates that modern culture has not succeeded in abolishing the crime. Prosecuting officers and criminal courts recognize it as too prevalent to be ignored.”

In June 1948, a group of students from UW in Madison had been charged with moral offenses for participating in abnormal sexual activities. Dane County Superior Court Judge Proctor placed them on one year’s probation, with what the paper called “a stern warning.” They had pleaded guilty. Judge Proctor seemed to be aware of the new research into human sexual behavior by Dr. Alfred Kinsey, for he observed, “Some would have us believe that abnormal sexual behavior is natural and normal biologically, but until our law-making bodies see fit to change the statutes, such behavior is unlawful and violators must be punished.” To show he was not personally into the new thinking, Proctor continued, “Each and all of you should feel deeply ashamed. You have embarrassed your friends and relatives, none of whom I am sure had the slightest idea you ever could or would become involved as you have. Each of you has caused an indelible mark to be placed against you.”

Also in 1965, the Court had the case of State ex rel. Stroetz v. Burke, which had its origins in 1954 when Stroetz, then 25 and employed by Marathon Paper as a pressman, was convicted in the municipal court of Outagamie County on a guilty plea of sodomy. Then he was examined under the sexual psychopath law and “found to need specialized treatment for his mental aberration; and thereafter on September 17, 1954, he was committed to the department of public welfare.” The order was extended in 1959, and again in 1964. Stroetz was not represented by counsel at his trial or at the first commitment order or its initial extension. The issue was raised whether a psychiatrist should be appointed to determine the question of whether in 1954 he was “capable of knowingly, intelligently, and voluntarily waiving his rights to counsel.” Stroetz lost. Among the court’s reasoning was, “The evidence establishes that petitioner appreciated the revolting nature of his offense, was embarrassed and remorseful, and wanted the matter of the plea and sentence over with as quickly and quietly as possible.”

In 1972, while upholding the conviction for oral sex in Jones v. State, the court rejected Jones’ claim that the law was unfair, noting the sexual perversion law was not enforced against married persons. The court found it “beyond reasonable argument” that the law was enacted to control or prohibit the consensual and private sexual intimacies of married persons. Justice Beilfuss, writing for the court about the criminality of oral sex, felt that “We cannot believe this statute can or will be used to threaten or prosecute married couples in violation of their rights of privacy.” No concern for homosexuals or unmarried heterosexuals here.

In 1973, Judge Jackman of the Dane County Circuit Court was reviewing the state’s firing of a gay man who was an early activist in the Milwaukee gay community from the Southern Colony near Racine. Jackman upheld the firing and made some startling statements: “Plaintiff asserts a constitutional right to be a homosexual and we have no quarrel with his right, so long as he confines his talk and activity to other than working hours and with some semblance of privacy.” Thus his free speech was limited, and he may not “proclaim his deviant conduct at work.”

In 1974, the Wisconsin Supreme Court heard the case on appeal, Justice Hanley writing for the court. Among the statements in the decision was, “The appellant claims that his off-duty association with other homosexuals is constitutionally protected. While such may be the case, this court need not herein determine whether mere association with other homosexuals during off-duty hours is constitutionally guaranteed.” Today who could doubt whether it “may” be protected. The basis for upholding the firing was “One specific aspect of the responsibilities of the houseparent was to direct the patients to a proper understanding of human sexuality. Such an understanding required the projection of the orthodoxy of male homosexuality. Consistent with the projection of the normalcy of heterosexuality by the houseparent was the requirement to project the unorthodoxy of male homosexuality….” No normal status for homosexuals in this decision.

In 1976, a man dressed in women’s clothes was entrapped by an undercover cop when he offered to perform oral sex. Rather than being charged with solicitation for prostitution, as a woman likely would have been, he was charged with soliciting for sexual perversion. The other charge common for gay men soliciting for sex was disorderly conduct, which usually resulted in a fine. The prostitution charge could result in a maximum of one year in prison while the sexual perversion charge carried a maximum of five years. In Sears v. State the plaintiff lost when he appealed the five-year sentence.

Thus for most of the twentieth century Wisconsin judges donned their black robes and put on their stern faces and spoke disapprovingly of homosexuality. Occasionally, though, judicial fairness gave a small measure of relief. None, however, could be termed friendly to the cause of civil rights for homosexual citizens.

In all these matters there was no acknowledgement of gay people as a class that was discriminated against in society. The more favorable court rulings of recent times have often relied on a judicial requirement of heightened scrutiny when there is a history of discrimination against a particular class. Judge Barbara Crabb’s ruling in the Federal Court for the Western District of Wisconsin on behalf of marriage equality used this heightened scrutiny doctrine, which was really set up by Wisconsin’s 1982 first-in-the-nation law prohibiting discrimination on the basis of sexual orientation. This fundamental shift in our legal status to group or class from just a bunch of criminals created the basis for the modern rulings by the jurists of our own era.